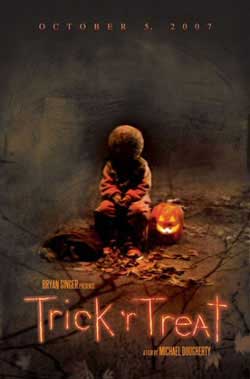 The usually boisterous traditions of Halloween turn baleful, and everyone in a small town tries to survive one night in pure hell in writer-director Michael Dougherty’s fright fest. Several stories weave together, such as a loner fending off a demented trick-or-treater’s attacks, kids uncovering a freaky secret, a school principal — who moonlights as a serial killer — poisoning his candy, and more. Dylan Baker, Anna Paquin and Brian Cox star.

I’ve been hearing about this film for so long it’s become sort of an enigma in itself. Though at the end of the day it really is just a horror film and nothing more. For those who has been following along know that Trick R Treat was marketed and then completely pulled out of the scene. In fact is was slated for a 2005 release directed by Michael Dougherty and then announced by Warner that it was pushed back. This notion had alot of horror fans scratching their heads as to what the reason was. More so, it began to almost elevate it to an early cult status because of it. As we know, hollywood usually has no problem churning out horror films at least to direct to DVD. 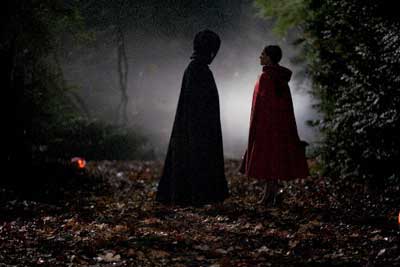 Well 2009 now brings the film back into light which features a starring role by familiar faced Anna Paquin. I watched this last night and in general report that I enjoyed it. Though I will say it was viewed as another cool Halloween focused film but not so much as a scary, sleepless nights kind of movie. 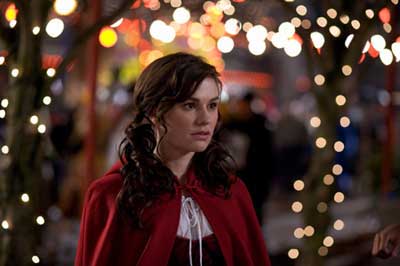 Now for all my 80’s horror fans, this film has no relationship to the film of similar name “Trick or Treat”. The one with the the killer Fastway score and the demon Sammi Curr.

In essence, it presents itself much like a old EC comic book. With anthology stories within, it combines cleverly instead of segmented like you would see in a movie such as “Creepshow”. We get 4 stories all happening around the same time that invoke eerie Halloween events. As the film progresses, we even get different perspectives and time displaced events that are revisited to clarify the general scheme. One such reoccurring character is the character of Sam, mysterious pint-sized trick-or-treater with a burlap pumpkin mask. He appears in each segment as a participant or just observer. We get the feeling that he has somehow introduced a certain evil into the air for those who don’t respect the traditions of Halloween. The four stories are labeled as such, though are not separated in the way of title cards. 1. “The Principal” , 2. “Surprise Party”, 3. “The School Bus Massacre Revisited” , and 4. “Meet Sam” are the 4 stories written within. 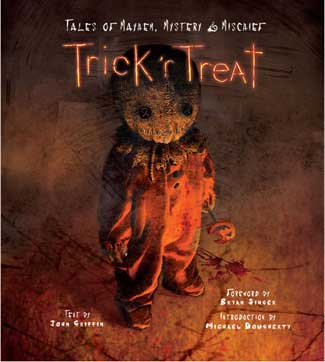 The filmmakers use these all to tie-in other sections making the whole thing come across pretty seamless. This in itself is a great way to approach these type films rather than the tired old way of doing it.

To summarize a bit, principal Wilkins is a bad man. He appreciates Halloween maybe too much and indulges in deviant behaviors. Part of his approach integrates with a certain comedy relief that is funny as it is horrifying. Laurie is under alot of pressure to lose her virginity among her friends. Her big sister coaxing her along leads to a final confrontation, though not what we expected. 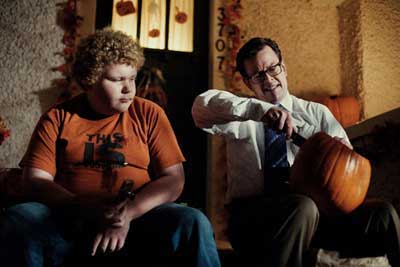 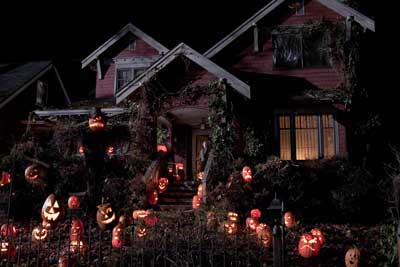 30 years ago a terrible accident occurred which saw the death of 8 disturbed school kids. With a bus running off into a quarry the tales have created a life of there own about the incident. Bad things come to those who taunt the undead and play tricks on others. Mr. Wilkin’s neighbor is the Halloween scrooge. He has more than he bargained for as Sam pays him a visit.

In fact the whole setting takes place in Warren, Ohio which I got the impression is somewhat corrupted in itself. They certainly celebrate all thing Halloween and from that joy comes a mix of the bad elements both human and supernatural. This is a place of legends and bizarre occurrences. 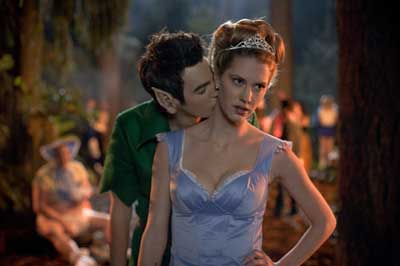 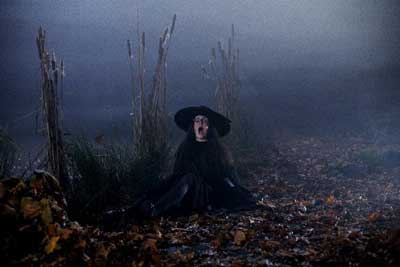 As a whole, Trick R Treat delivers with that certain fan fascination that makes going to the movies fun. Clearly not caught up in all the modern brutalities we see nowadays, the film almost feels closer to a retro fit that a new beast to emerge. Though it brings to the table all the pieces and bits that will keep this one long heralded for the Halloween circuit for years to come. Remember to keep your Jack O lanterns lit this Halloween…or you just may receive a visit from Sam.