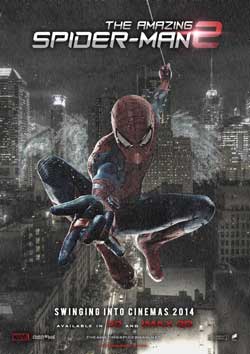 It’s great to be Spider-Man. For Peter Parker, there’s no feeling quite like swinging between skyscrapers, embracing being the hero, and spending time with Gwen. But being Spider-Man comes at a price, only Spider-Man can protect his fellow New Yorker’s from the formidable villains that threaten the city. With the emergence of Electro, Peter must confront a foe far more powerful than he. And as his old friend, Harry Osborn, returns, Peter comes to realize that all of his enemies have one thing in common: Oscorp.

Coming up on the heels of last month’s “Captain America: The Winter Soldier” arrives the 2nd super hero epic from Marvel Studios to be released this year, “The Amazing Spider Man 2“. Picking up from where 2012’s “The Amazing Spider Man” left off, we find Peter Parker (Andrew Garfield) settling into the idea of being a super hero very handily, getting cheered on by bystanders and the police as he’s making wise cracks while stopping a Russian thief, Alexsei Syetsevich (underused Paul Giamatti) from getting away with a pile of radioactive isotopes that he filched. Peter’s also graduating from high school, along with the love of his life, Gwen Stacy (Emma Stone). Life is actually pretty damned good for Mr. Parker as the film begins but this being a Spider Man flick you know things aren’t gonna stay good for long. 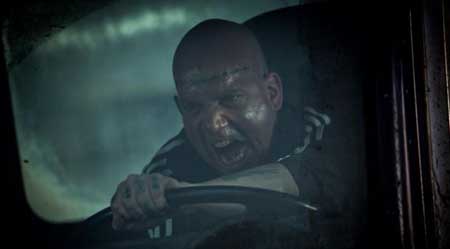 Despite the taciturn approval of law enforcement and the general populace, the tides of opinion are slowly turning against Spidey. People are wondering who’s gonna pay for all of the residual damage that occurs whenever a couple of super powered yokels go toe to toe in midtown Manhattan. Law enforcement is beginning to wonder who pit Spider Man in charge all of a sudden. And to make things even worse, Gwen has decided break up with Peter and go to college in England (Oxford to be precise). The break up comes from Peter’s inability to be with Gwen without being reminded of the promise he made to her father, deceased police captain Stacy (Denis Leary). That promise being to keep away from Gwen, no matter what. Peter sees Gwen’s dad (glaring at him disapprovingly), everywhere he goes and he doesn’t want to go back on his promise, even if it means losing Gwen.

Enter Max Dillon (Jamie Foxx), a harried and lonely employee of Oscorp. With no friends or family to call his own, a chance meeting with Spider Man gives him a feeling that maybe…just maybe, he’s found himself a friend. But an unfortunate accident imbues Max with the power to harness electricity and rechristening himself Electro, he intends to tell Spider Man and the world that he will not be ignored anymore! In addition to that menace, the CEO of Osborn Industries, Norman Osborne (Chris Cooper) has passed away and his unwanted son, Harry (Dane DeHaan) has come back from a seeming exile (executed by his father) to take over the company. But the duplicitous Donald Menken (Colm Feore), has other plans for Oscorp and Harry is only going to be in the way. By the way, Harry is also suffering from the disease that killed his dad and comes to the realization that only Spider Man’s blood will be able to save his life. Luckily for him, he finds the Green Goblin exoskeleton that his father designed as a combat outfit and he intends on using it to extend his life & force Spider Man to give up some of his precious plasma… 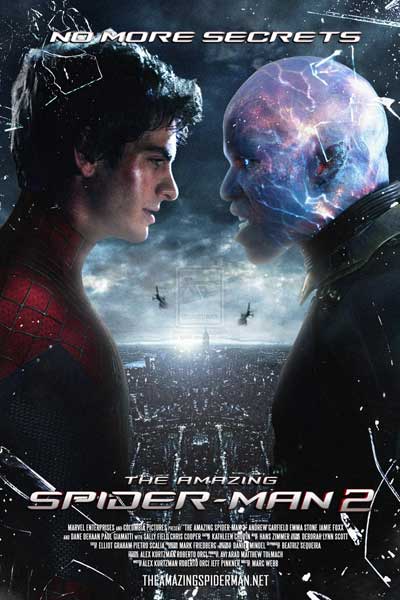 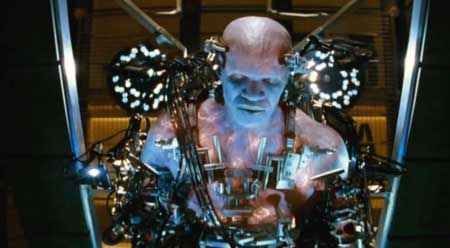 There’s a lot that’s good here in this film. The performances are all first rate with the relationship between Peter and Gwen front & center. Garfield and Stone are an off screen item and their feelings for each other can’t help but bleed out into the relationship between Peter & Gwen. It’s obvious that they’re not really acting all too much when they’re together onscreen and genuinely care for one other, the chemistry between them is perfect. As Max/Electro, Jamie Foxx does a servicable job but his character just feels like someone I’ve seen in a dozen other films. The nebbishy, nerdy genius that no one really pays any attention to might be a established trope in the comic world but its been done to death in the world of cinema (Especially in comic book films). Paul Giamatti spends his few scant minutes of screen time chewing up scenery like he’s never tasted food before, but his over the top take on a Russian accent leaves something to be desired. The best performance in the film comes from DeHaan as Harry Osborne/Green Goblin. As Harry, he fairly seethes with an inner hatred of people in most of his scenes and that energy is a palpable energy that the audience feels coming off of the screen. Sadly, the by the numbers script (By Alex Kurtzman, Roberto Orci & Jeff Pinkner) substitutes length for actual story and betrays all involved but of all the principal cast members, DeHaan gives the most memorable performance by far. The special effects are of the highest order and the film really shines in 3D. The CGI is seamlessly interwoven with the live action scenes and it looks amazing. It’s visually kinetic & seemingly without any dull moments thanks to steady direction from Marc Webb. “The Amazing Spider Man 2” will not bore you. 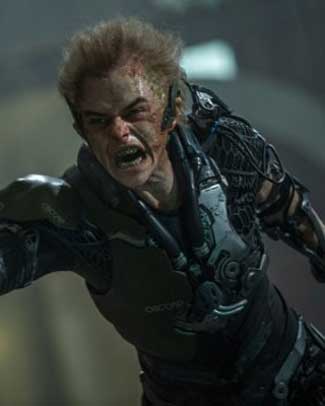 But there’s a lot that’s not so good in this film as well. The villains are weakly scripted and in the case of Electro, really kind of dull. Apparently all one needs to do to become, As Dillon puts it – “A Force Of Nature” – All one has to do is fall into a vat of angry electric eels. That’s it folks, that is about all of the explanation we get as to how Dillon becomes Electro and it’s just bogus. And the final battle between Electro & Spidey, while visually stimulating and fast moving, ends far too perfunctorily to be truly satisfying. And Electro reminded me a bit too much of Dr. Manhattan from “Watchmen” (2009) to be effective. While I didn’t think they’d stick with the look that the character had in the comics, I really think they could’ve done better. DeHaan’s Green Goblin feels like a far more substantive villain in the film but he arrives far too late to make much of an impact. Giamatti’s character returns at the end (As Rhino) but the Rhino suit looks way too clunky and unmanageable to be much of a threat to any superhero worth his salt. And why is it that policemen ALWAYS shoot at giant mechanical robots when they know that their bullets aren’t going to have any effect on them? 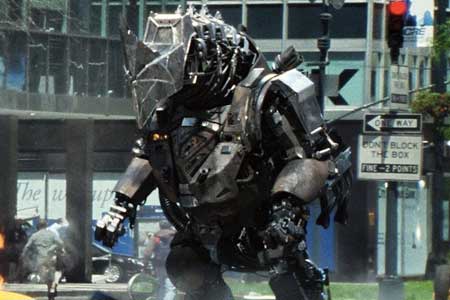 The story of Peter & Gwen and the obvious love the two have for each other is what makes this a good film but it’s called “The Amazing Spider Man 2” for a reason and the weakness of the two main villains soften the overall impact of the film. I dig love stories sometimes but methinks too much focus was put on the love story and not enough on the villains. The film introduces a few characters that will have fanboys creaming their jeans with the thought of the possibilities that they represent for further Spider Man films. Alistair Smythe (B.J. Novak), Felicia Hardy (Felicity Jones) make appearance here and that bodes well for further outings. And there’s the tantalizing peek into what Oscorp is really working on (Since announced as The Sinister Six and coming in a film of their own in 2016) which can’t help but excite fans all over. And the stinger after the end credits begin to roll is so frigging epic in it’s possibilities that I near passed out just thinking about it for more than a few seconds! 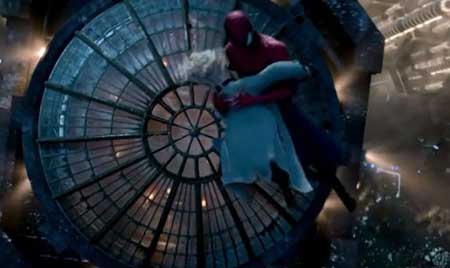 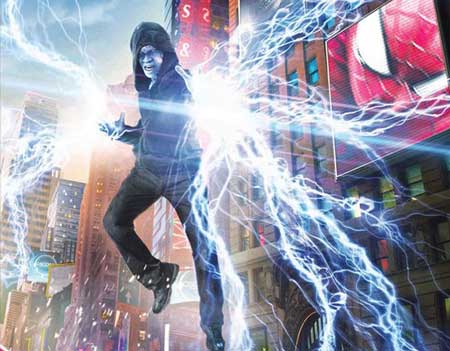 Ultimately I enjoyed the film but not as much as I had expected to. It’s length (Nearly 2 1/2 hours) is an issue as well but not a deal breaker in this case as I was captivated enough by the performances to ignore the bloat of the film. But with 30 minutes shorn away and a bit of a stronger origin story for Electro, “The Amazing Spider Man 2” could have knocked my socks off. Suffice it to say that my socks remained on but I was entertained enough to recommend it. If nothing else, just see it for the stinger at the end…it’s a killer!

The Future is in Peril THE AMAZING SPIDER-MAN ‘2099’ Launch TRAILER!