Home | Gorge Down on Cult Smash RAVENOUS Coming to Bluray

Gorge Down on Cult Smash RAVENOUS Coming to Bluray 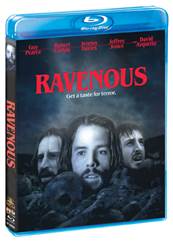 AVAILABLE IN STORES EVERYWHERE ON JUNE 3, 2014

On June 3, 2014, SCREAM FACTORY™ is proud to release RAVENOUS Blu-ray™ on home entertainment shelves in the U.S and Canada.  Available for the first time on Blu-ray, this highly collectible SCREAM FACTORY™ release features insightful bonus content and is priced to own with a suggested retail price of $24.97.

It’s a recipe for nonstop action and excitement when the inhabitants of an isolated military outpost go up against a marauding band of cannibals in a deadly struggle for survival! Ever watchful of the enemies who might literally tear them apart, the uneasy alliance of soldiers must fight brutal elements of the Sierra Nevada wilderness – as well as their own murderous instincts to stay alive.

Capt. Boyd (Guy Pearce), a disgraced veteran of the Mexican-American War, gets quietly shipped out to Fort Spencer, an isolated Sierra Nevada mountain outpost inhabited by a motley crew of soldiers half-mad with boredom. But then a frozen stranger named Colqhoun (Robert Carlyle) arrives spinning a terrifying tale of settlers trapped in a cave and forced to eat one another. Using the pretext of survivors needing help, Colqhoun leads many of the fort’s men into a deadly ambush, but Boyd escapes, wounded and delirious. Will he and the remaining soldiers be safe from the madman’s hunger?