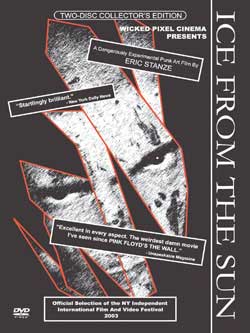 The angels in Heaven and the devils in Hell have a common enemy: The Presence, a being who dominates a dimension gorged with terror and bloodshed. Alison is the mortal recruited to hunt down and assassinate The Presence. She must journey through this universe of chaos and depravity, enveloped by the screams of the tortured and the stench of the long dead.

Ice from the Sun takes advantage of kinetic editing with an opener sequence that slashes by with the fury of an epileptic seizure. An odd film in concept is actually highly original in its ability to cross genres of scif fi and horror and yet still maintain most of its visuals on a minimum budget using basic locations. We are introduced to an entity named “The presence” (former human name Abraham) who rules a interdimension sealed in with walls of ice. As humans are brought into his realm, he is free to induce separate hells upon each one, though his torment lies in the fact of being imprisoned on this plane as well. The film does its best to really lay a foundation of the mythology of the movie so we are not entirely in the dark.

I’m actually thankful that it was explained as much of what was said would have been lost in the translation of the movie. We are told that Abraham, a former apprentice killed his master a sorcerer to seize power. An enemy of both demons and angels, he is sent to an ice barrier to prevent him from invading and gaining power. When Allison commits suicide, she is given a second chance per a mission to enter his realm and kill the rogue apprentice.

In the course of her mission she comes across 6 new souls who are in mid transition of being subjected to their own tortures. These individual hells are what highlights the film with some pretty nasty stuff. Not the nastiest I’ve seen but pretty brutal none-the-less. In one highlight seen, a girl is stripped naked, laid on a road and then dragged behind a car per her rope tied feet. This in itself leaves her body pretty damaged. Though when the driver stops to what we assume to offer some sort of relief, he proceed to dowse her bloodied body with salt and then finish it per running the car over her head. Each of these new victims have a bit of their own fears embellished with a personal hell.

The acting is what hurts this release which is reduced to downright mono tonal at times and unemotional. Allison played by Ramona Midgett is a poor choice with her uninvolved performance that ranges on emotionless most of the time who I thought at first was actually a guy playing the role until her bathroom nude scene.

The FX are low budget but still work quite well. On might assume I’m giving this film a negative review but I have to commend director creator Eric Stanze for really introducing an experimental and interesting film. If the acting talent would have been picked with a more careful eye I believe this film could have elevated past the low budget moniker. Perhaps in the tradition of remakes, this film could really sell itself with a budgeted remake, story brushing over and a new studio backed presentation. The following was found on wikipedia which also helps to explain this film a bit more.

The concept of Ice from the Sun creates a third presence that disrupts the balance between Heaven and Hell. The Presence is a supernatural entity that rules a separate dimension surrounded by ice, where he brings imprisoned humans for eternal torture. The Presence had once been a human, but now commands omnipotent powers. A young woman who is in the midst of committing suicide is recruited by a coalition of angels and devils to infiltrate The Presence’s ice world as one of his prisoners for torture. Her goal is to get The Presence to recall his blocked memory of his human origins, which would allow his icy domain to melt and enable the angels and demons to destroy their common enemy.

Production and reception
Ice from the Sun was produced in the St. Louis, Missouri metropolitan area with a cast of local actors. Stanze used 193 rolls of Super 8 film (a total of 9,650 feet) to shoot the film.

The film was released on DVD in 1999 by SRS Cinema, and it received strong reviews in the horror film media. Carl Lyon, writing for Monsters at Play, called the film “a deftly executed, relentless nightmare, unapologetic in its brutality or its experimental nature,”while Mac McIntire, writing for DVD Verdict, stated the film was “recommended for die hard horror fans looking for something way off the beaten path.”In 2000, Ice from the Sun won three awards at the B-Movie Film Festival.

In 2001, the film received a theatrical release, where it was met with mixed reviews. Maitland McDonagh, writing for TV Guide Online, praised the film for being “often imaginative and surprisingly accomplished within the limits of its ultra-low budget.” However, Stephen Holden of The New York Times complained “it is the kind of film that only a certain breed of cinematic cultist could tolerate.” Michael Atkinson, writing in The Village Voice, harshly stated the film was “a furiously pointless punk-gore loogie that resets the bar on how wretched an amateur indulgence can be and still garner public screen time merely on the impression of being ‘transgressive.’”

The film was re-released in 2005 by Image Entertainment.

Ice From the Sun