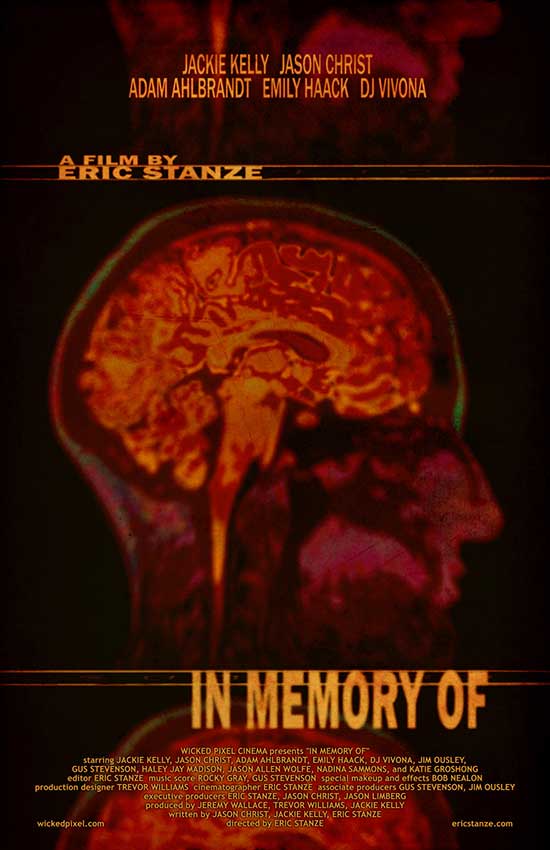 When a medical experiment turns into a blood-soaked nightmare, the only surviving subject flees for her life. Painfully missing her most precious memories of childhood, pummeled by horrific hallucinations, and pursued by those who stand to profit from her damaged brain, Amber Sheridan embarks on a cross-country road trip to track down a mysterious stranger – a man who has the ability to end Amber’s madness, and restore the memories that have been stolen from her.

“In Memory of”, a 2018 film per Wicked Pixels, marks the first release from this group since 2011. Under the film direction of creator Eric Stanze, Wicked Pixels has delivered a smattering of the most  intense, violent, and often visceral releases of the last 2 decades. Films such as “Ratline“, “Ice from the Sun“, Savage Harvest” and “Scrapbook” (and more!) stand as among some of the more extreme releases to come out of film makers. Now in 2019, we have the pleasure of sitting down with a brand new release from this group that has been know for pushing the cinematic envelope. 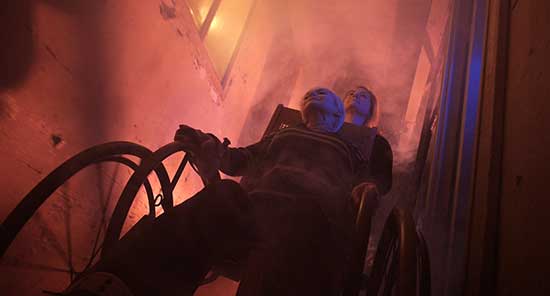 Upon open, initially we are granted a series of motion graphics collages connecting some of the films underlying themes. Commenting on the fine intro credits itself, I make it a point to mention this as this is an area of movie making today that really doesn’t get mentioned enough. It should be noted that the planning and preparation for these short pieces often can be a short film in themselves.

Jackie Kelly stars in the film as Amber Sheridan, a young woman struggling in life recounting memories of past acquaintances, circumstances, and traumatic episodes. The film works much like a hallucinogenic retelling of Amber’s life events, full of flashbacks and memories that appear to be intertwined with real moments and those imagined.

Actor Jackie Kelly makes an early debut as the lead of “In Memory of”, bringing not only beauty and emotion but a dramatic performance that will serve her well in future film roles. A natural, so it seems, Jackie handles the intense nature of sequences and storytelling that “In Memory of” brings to the table.

Simon Diyor (Jason Christ), a reoccurring  part of the film’s plot, appears to her offering solace from her mental suffering. His character seems to evolve and change dynamics over the course.

In review, the film is designed to play out in the same sense you might compare to 1990’s Jacob’s Ladder. I would also throw in an influence echoing traits of Cronenberg and David Lynch (due to the surreal nature). In retrospect, the visual ride seems to originate from an experimental drug testing session that has asked for volunteers to submit freely to an injection designed to cure them of a disorder they are inflicted by.

The disorder is called 1117 or the Scott Chandlers disease of which they have all been diagnosed with. They are told that the disease will lie dormant until a certain age of which bouts of dementia will set in, followed by flesh bruises, atrophy, and eventually death. The disease now becoming more robust and viral, is currently locked down in red tape which has prevented the cure to emerge. 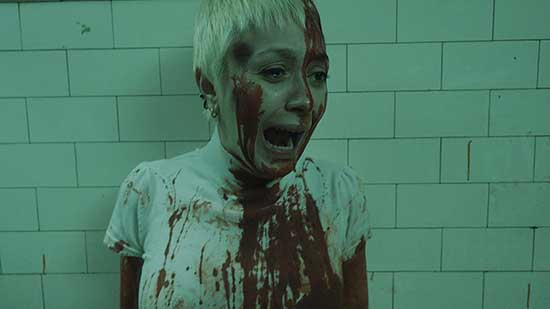 Amber Sheridan is on a literal mind trip. One that takes her on a journey across the US. Crossing over into several states, cheap motels, and rest stops, she encounters people from her past and present that appear to provide bits of the narration in her journey. These characters are intermixed into the story often appearing more in a dream-like/nightmare capacity seemingly invoked as part of her mind’s journey.

We are reminded thru quick visuals that she may be perhaps in a hallucinogenic state, one of which the engineers of this program may be trying to guide her out. Rich in symbolism and familiar associates, Amber slides in and out of what seems to be part realism and part fantasy. The fantastical parts are often more on the horrific side ranging in bandaged observers, intense sequences, and appearances by her co-experimentors entering in and out of her journey like imagined version of themselves. As the degradation of her mental facilities take prominence, she continues on this mental narrative while traveling to Mohab, Utah to meet a man who is said to be the one who can help her. 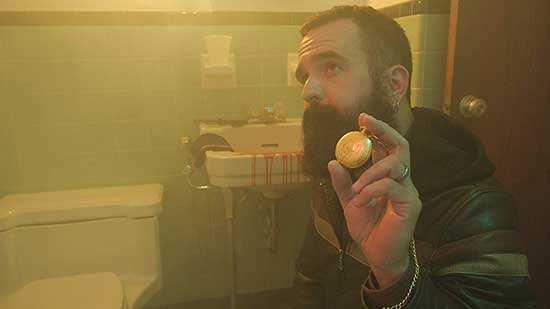 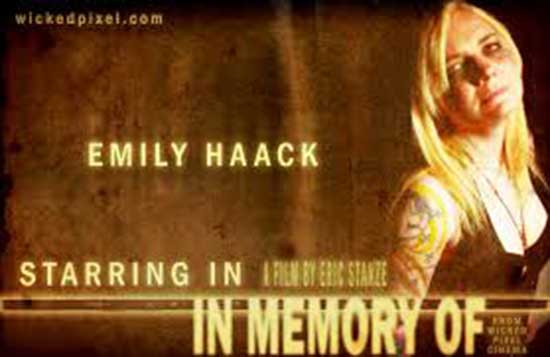 The weight of various associates thru out her life make appearances as part of this mental breakdown often providing her pain and emotional stress (but later revealed as just patients), now acting as players within her brain’s own storyline. Flashbacks of herself curled up in a fetal position combine with additional visions of these test subjects (also curled up and being buried alive). A symbolic watch acts as mental set piece signifying loss of time.

In all, the film really hits the marks as a cult styled road trip piece and a dynamic new accomplishment for Eric and team. Never really being too visceral, it still has its moments of intensity. It also has plenty of drama that is well-acted per Jackie’s great on-screen performance. In research the film was shot over 46 days making for a pretty brutal schedule. The work here pays off with plenty of interest points to carry the story. 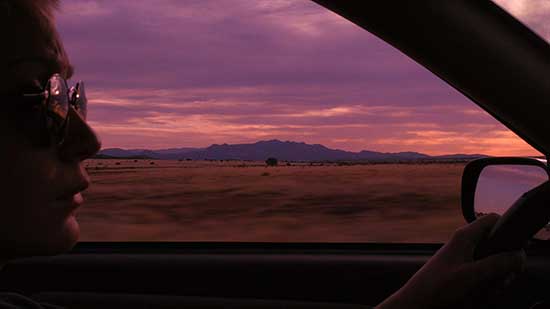 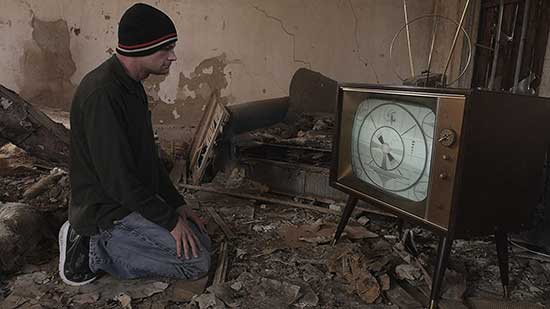 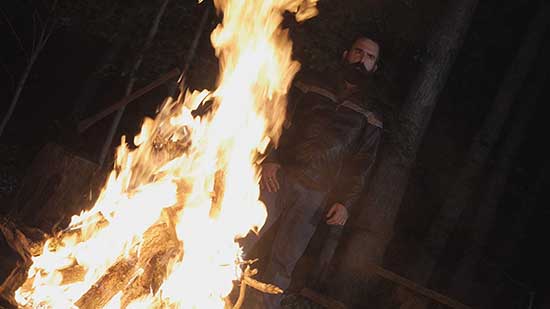 The bluray release contains an additional disc that includes a documentary of the film showing us the behind the scenes, fx work and interviews. I suggest checking it out afterwards to get a glimpse into Eric’s movie making process.

Weirdly powerful and full of visual pizzazz, “In Memory of” is one to see for thrill-seekers looking for something different!

“In Memory of” can be purchased on blu ray here 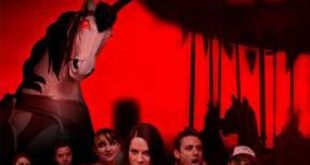