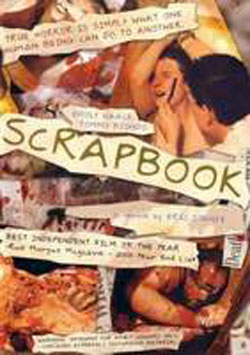 A young woman named Clara is captured by a serial killer named Leonard who records his “life story” by keeping a scrapbook of his many victims. In addition to adhering Polaroids, scraps of clothing, and other small trophies to the pages, Leonard has forced his victims to personally write in the scrapbook about their individual ordeals. Clara is beaten, raped, starved, and locked up like an animal, filthy and naked. She is forced to write in the scrapbook, adding her agony to the pages. She soon realizes that her only hope for survival is to manipulate Leonard through her writings in his cherished scrapbook.

Eric Stanz and Jeremy Wallace are the ones that persuaded me to see this film and demanded that it was one of the most f*cked up movies of all time and that the buyers sometimes return it after being so offended. I didn’t know what to think at first because everyone says their film is ‘f*cked up’ Oh boy, this one takes the cake. I put it above Murder-Set Pieces…and that’s a really f*cked up movie. This film goes further than any other I’ve seen. You can count on brutal rape, full fledged nudity during the whole film, intestines and body parts everywhere, ominous music, and brutal payback.

It says it’s based on actual events, which events I am not sure of. Stanze told me the film’s ideas came from a study of serial killers. He wasn’t sure which specific ones so if you’re watching the film thinking all these things actually happened to this girl….the ideas came from many other stories combined I guess. You would think the creators are complete masoginists and you can see why people would return it. It’s not that the film is bad at all. In fact, I was very impressed by the writing and the acting. Simply put, there are many f*cked up individuals out there who are not as f*cked up as some of the rest of us. I don’t know who would watch the movie getting turned on or thinking, “Oh this is so cool.” But hey whatever floats your boat.

The movie starts off with a black scream and two women are talking to each other. The killer opens the van door and a girl’s intestines are all over the place falling out and the other girl is screaming her head off while the killer slams the door. Cut scene. I liked that opening. I guess she was talking to an almost dead girl? You would think that if her intestines are all out she wouldn’t be able to speak but every one’s rules are different when it comes to their own film. Not every vampire is scared of garlic.

Cut to a short hair bare breasted girl in granny panties feeling herself and checking herself out in the mirror. The killer is a little boy and this is her big sister. Big sister wants some little brother love which is just gross. The next event is still unclear to me but I think the older brother or boyfriend, or whoever he is starts screaming at the kid and I swear it looked like he was raping him but I am not sure. The way it was filmed was as if the boy was behind the camera. You don’t ever see the little boy. Guess we know why this man has become a killer. Motive in place.

Now we get to Clara with her total dyke cut. It appears that all his victims have short hair, or is that just a coincidence? Well anyway, he is introducing himself and basically this man tells her his intentions. He is working on a scrap book of all his ‘conquests’ and she is the last edition to his masterpiece. He wants to be famous and he even puts the bodies out to where they can be found. After the introduction he takes her to the back bedroom where he brutally rapes her. I mean this is so brutal you would think it’s a snuff film. After he’s done you see blood all over her in the naughty places. So was she a virgin? Oh I have many questions still and will need to ask them. After he rapes her he begins to pee on her. Oh well that’s nice.

I couldn’t help but laugh which creates more questions about myself. That would never be funny if it really happened but for pretend I thought it was funny. The film is not for everyone haha. Then he tells her to write something in the scrap book. It appears as if he has all the women do the same.

I adore what she wrote and I quote, “You think you are such a big man, but your d*ck is so small I couldn’t even feel it when you stuck it in me, you piece of sh*t f*cking loser.” That had to sting just a little bit. I’m betting it did since he gets pissed off and throws her in a trash can then seals it up with duct tape. Before he closes her in he pours milk all over her. The amount of time she is left in the can is not defined. He takes her out and waters her down.

I love when he begins to ask her about her menstruation. He asks when she will be starting and if she had tampons on her then insist she not get any ‘cunt juice’ anywhere in the house. Following that he tells a story of when he got his red wings for the first time. I bet this movie has pissed a lot of women off. I’m pretty laid back and find some of it to be quite comical. He is a sloppy killer though. She could of had many times to escape and does escape several times. One of those times he chops her toes off with an axe-that was painful to watch. He brings her into the shower and rapes her again. Running through the house there are many dead bodies and spoiled food. How you can live with that smell?? This guy is such a loser.

She was right about his penis too. He whips it out making her lick on it among other things and it looks really really small. Guess that’s another reason why he is so pissed off at women. It was hard to watch that scene. It’s such graphic nudity and just gross. Then this guy shoves a huge bottle up her vagina or butt hole I am not sure but there is blood coming out and filling the bottle. It looks painful and I bet that created some infections. So sick. I’ll admit my head turned for a second which I never do.

I wont spoil the ending but lets just say she gets her payback repeating almost the same acts he had acted upon her. Involving more duct tape, photographing, and another painful scene to watch that involves a knife being twirled and jabbed into the bottom of his feet. I’m stopping at that but yes sirs and ma’ams, I was very pleased with the ending. Overall, it wasn’t a terrible film. The acting was spectacular and bless Emily Haack’s heart, she was naked the whole time. Her cries and screams were so vivid and seemed real.

I would love to speak with her. Director Eric Stanz is one of the most talented filmmakers currently working in micro-budget cinema. This man does not play around. The actor Tommy Biondo, whom played the killer, was very good indeed. The man disgusted me and at the same time he had me feeling terrified if I ever ran across his path.

Unfortunately, the actor has passed. 26-year-old Tommy Biondo, who also wrote the script, died shortly after Scrapbook was completed. He never saw the finished film. In 2001 the film received four awards at the “B-Movie Awards” Picking up titles such as; Best Film, Director, Screen Play, and Best Villian. That’s a great handful of awards that they film earned. Also, Named Best Independent Movie of 2001 by Rue Morgue Magazine.