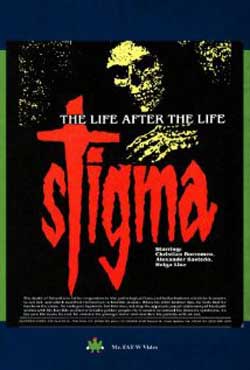 The death of Sebastian’s father engenders in him pathological fears and hallucinations. His death wishes seem to cause horrible accidents, which he is unable to control. When his older brother dies, he feels that he has caused it. He undergoes hypnosis, but his apparent supernatural powers continue. As his own life nears its end, he becomes even more violent and sadistic.

Stigma, the typical story of an incestuous sexist with a serious case of Oedipal complex (oh, and who also happens to be able to kill people with his mind). This film does possess a sense of allurement with its strange and absurd plot. But, like the 70s’ exploitation film it parades as, not much pivotal information is ever explained. And if you can get past the terribly awkward scene shifts that provide no segue whatsoever, you’ll only find yourself disappointed and thirsting for more gore—which in this movie, is probably by far some of the most pathetic attempts at prosthetics and fake blood I’ve seen in a while. 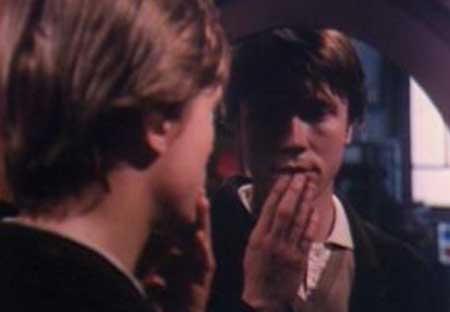 The movie begins with a car crash which ends with the death of a patriarch. His son, Sebastian, predicts his father’s death. Sebastian’s mother explains that Sebastian has always been clairvoyant. By the time all of this has been happened, you’ve already been exposed to three or four scene shifts that cut so quickly, they’ll make you feel as if you’re being violently thrown into the next scene. Scarcely is anything predicated or built to a head. In a way, Stigma violently throws you into its poorly constructed plot.

Fast forward. Sebastian’s mom is dating again, and Sebastian does not approve. In fact, right from the start, Sebastian’s attachment to his mother seems to be a bit bizarre. This bizarreness gradually intensifies and grows until the movie’s inconclusive ending. Sebastian’s vibrantly twisted personality and character complexity function as one of the sole components maintaining the allurement of this movie. He’s almost like a love child created between Norman Bates and Alex DeLarge—awkward with women, mommy-obsessed, and slightly aware of his capacity for depravity and evil. Frustrated and irate that mommy’s doing new men, Sebastian flies into a rage and screams at his mother, “You’re a whore! All women are whores!” —Sebastian, truly a keeper. 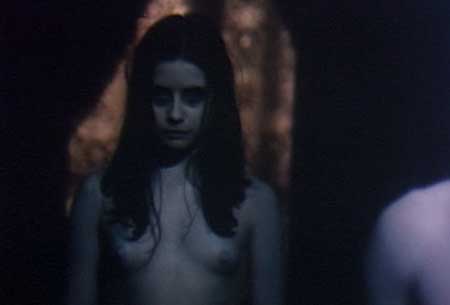 On top of all Sebastian’s serious issues, he doesn’t take rejection well. This, coupled with his ability to slay with his mind, explodes into a streak of impulsive murders, starting with a pretty classmate who doesn’t quite enjoy getting raped in high towers.

When Sebastian does will a death to manifest, his lower lip bleeds. It isn’t too profuse; it’s more akin to a strip of blood. Most of the terror and fear (if any) in this movie stems from the unpredictable mind of Sebastian. It isn’t a matter of how; it’s more a matter of who’s next? Even in the final scenes where the story’s escalated to a mass ax slaughter, the blood and gore are scant, cheap, and laughable. They don’t even make any sense. While slamming the ax down upon a hapless victim, the audience never sees the ax actually connect to anyone. In summation, the product results in what appears a half-assed mugging. 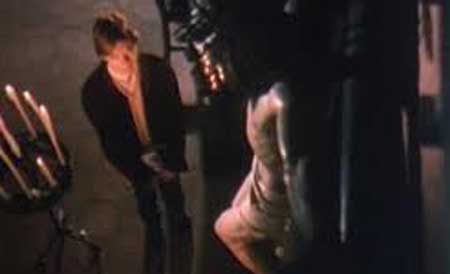 Speaking of things that don’t make sense (like a lot of Stigma’s plot), the characters and their intentions rarely connect, much like the connection between Sebastian’s uncanny ability to telepathically kill and his past life. Take for instance, Angie. When we’re first introduced to Angie, she’s preparing a dinner party for Sebastian’s brother and him. Her self-proclaimed psychic friend, Olga, assists her. Angie and Olga’s relationship is extremely ambiguous. When the four sit in the living room to talk, the camera gently glides and focuses over dubious pictures of Angie and Olga intertwined. The film never fully explains this relationship, leaving the viewer to assume Angie’s thoughts as “Hey, this is my friend Olga, we live together, decorate our home with erotic pictures of ourselves, and sometimes kiss on the mouth…but we’re totally not lesbians.”

And though she seems to genuinely believe in Olga’s abilities, she never once listens to her advice. But really, Angie never once listens to good advice in this movie. Surrendering to the fact that Angie is unwilling to eject Sebastian from her life (and intent on protecting Angie), Olga tries to help Sebastian discover the source of his darkness through hypnosis—where we learn that Sebastian has kept up the trend of incest for a couple of life cycles. Of course, it didn’t help, it only aggravated Sebastian’s propensity for evil. He returns to the place of his former life to retract forgotten memories, and in this moment we learn the truth. Reflective of his current life, Michael (Sebastian in his past life) is a lazy and spoiled young man with the hots for his sister.

Seriously movie, just because the mom and sister are hot does not mean it’s okay to form incestuous relationships. Michael falls in love with his sister, who visits him nightly to have sex and in her words “know her spirit” —couldn’t she just take a trip across Europe or something? Boinking my brother ranks pretty low on the list of activities I would choose to “find my spirit.” Basically, at the heart of it, Michael’s sister is telling him that she was just experimenting in preparation for her fiancé. This does not bode well with “Michael.” Add this to his father and mother sending him off to boarding school, and we end up with an ax murderer. What this has to do with Sebastian’s psychic ability, telepathic killing power, or his mommy issues, is far beyond me.

In her infallible stupidity, Angie meets and stays with Sebastian in the old, abandoned mansion where Michael murdered his entire family. After Olga’s warning and Sebastian’s confession of his incontrollable and compulsive power, her death was anything but unpredictable. In the end, we’re left with a shot of Sebastian glaring sinisterly at a mirror that cracks. The connections remain dismantled, and we wonder what the point exactly was. If it weren’t for the pretty boy, creepy, mommy-obsessed, and evil presence of complicated Sebastian, this movie would lack any vitality.