There are many things which I liked about the short film, Lucky, before I even sat down to watch it – it was actually part of a contest in Kentucky (called Unscripted: An Indie Film Xperience) where those that won would get to see their script turned into a short film by a local talent. Todd Martin was the lucky (pun intended!) winner here, and Jakob Bilinski was the local talent in this case. The film was shot in an astounding eight hours in a library that had dedicated itself to this special event. This is truly independent film at it’s best.

Anyway, onto the film itself…it opens with a girl in an empty library, frantically looking through books and jotting things down. She seems distressed – is it the anxiety of an impending exam, or perhaps something a little more sinister? Then in comes a rather dodgy guy who sits at her table and proceeds to talk about some killer that’s on the loose at the moment, with six women dead already. The girl gets annoyed with his interruptions and politely tells him to be quiet or go away, but he seems undeterred by this. He’s definitely a bit off, when suddenly he pulls out a knife and informs her that he is that killer. Naturally, she’s terrified. However, it quickly becomes apparent that this girl is not what she appears, and the killer greatly underestimated what he was dealing with. What he thought would be just another victim to add to his resume, turns out to be darker than even himself.

It’s the simplicity of the storyline that I like the most about Lucky. It’s set in one location, with just two actors and only the simplest of effects (some blood, some creepy contact lenses and some demonic sound effects). It was shot and edited well, just as good as any Hollywood, blockbuster affair that’s made for millions. The relatively limited space is used well too, with the emptiness of the library and loneliness of the girl emphasized with the long shots, and her desperation and anxiety highlighted in the intimate, close ups. So the acting feels a little awkward at times, but that is a drop in the hat compared to the high quality of the rest of the piece.

Lucky is an enjoyable little film, which is at a high standard for an independent film. I highly recommend giving this a go as it certainly won’t take up much of your time and it is a masterclass about how to do so much with so little. Taking the scale of the film into account, Lucky was absolutely phenomenal. 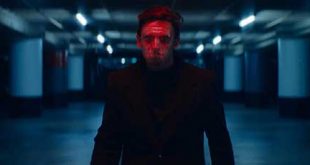