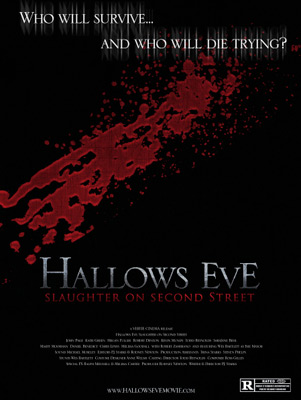 Days before the annual opening of Slaughter on Second Street, Owensboro’s premiere haunted attraction, a tragedy befalls one of their own. Despite pleas from the manager, Buck Masters, the attraction is shut down until the mystery is solved. In his frustration, Buck devises a plan to get the haunt back on its feet and make some extra money while he’s at it.

Greetings once again Boils and Ghouls, to yet another edition of Indie Scares. Today I’m going to be talking about a film from the folks over at Verite Pictures entitled Hallows Eve: Slaughter on Second Street.

When you read the synopis of the film, it sounds more or less like any other horror film that’s set in a haunted house attraction. I’d even go out on a limb and say that if you took Funhouse or Dark Ride and mixed in a bit of Session 9 and House on Haunted Hill you’ve pretty much got Hallows Eve. Despite what it borrows from those other films (and a bit of a Scooby Doo in places) its still a fun film with enough gore and solid acting to keep you interested for its entirety.

The story kicks off in the Slaughter on Second Street haunted house attraction (Owensboro’s Premeire Haunted Attraction as the sign outside says) with the security guard coming in to do a sweep of the attraction before locking up for the night. What he finds however is a mutilated young man with no eyes and blood all over his face.

We jump back two hours and the young man from the previous scene is very much alive and well, with a group of other members of the Second Street crew cleaning up and preparing for the opening in a few days. The security guard tells the group he’s got to run a few errands and to lock up if they leave before he gets back.

Through a bit of silly dialouge and someone appearing in a black robe, all of the poor bastards we just met end up dying in awesomely gorey ways. Every death that follows is due to twists of fate and accidents: one runs neck first into a hack saw, another gets a chainsaw to the body and none involve the robed figure.

The next day we are introduced to Buck Masters, the owner of the attraction, as he’s fielding calls from concerned citizens. His brother Daimen arrives and tells him the shows over, he owns the property and he’s shutting down Slaughter on Second Street until Buck can sort out the problems of the attraction.

Buck’s not happy about it, and decides that the best way to deal with this is to call in a paranormal investigation team to check the place out. It’s clear he’s got some sort of devious plan to scare the team to drum up some support for the attraction by claiming it’s actually haunted.

The investigation crew arrives the next day, Frank the stoic leader, Alma the researcher, Stephenie the psychic and the Scooby and Shaggy of the team, Doobie and Chevy. Frank pulls Alma aside and tells her that they’ve got to make this investigation count or else it’s the end of the line for their paranormal research.

Once inside, the team meet with Buck and Mr. Jenkins the grounds keeper informs the team of the buildings dark and evil past. Before he can lock the team in for the night, Mellisa, one of the former employees comes in to retrieve her stuff. She’s somehow trapped in the attic until the attraction is locked down for the night. But what’s this? Another group of former employees are locked in too? Why yes, it seems Buck’s plan involved a former employee named Elias (the brother of the poor bastard who got his eyes gouged out the day before) and two other old crew memembers who’ve got “Cannon Fodder” printed across their foreheads in giant letters.

I really dug this movie, despite its cliches and Scooby Doo ending (I swear to god, when the villian is revealed, they actually say “And I would have gotten away with it too if it weren’t for you”) because regardless of what I’ve described above, the film is a lot of fun. The cast is believable and in most cases really good. They reminded me of people I’ve known, and I think that’s why all of these characters work so well. They aren’t your standard horror movie cannon fodder, they seem like real people that you might know. Doobie and Chevy provide the comic relief by being both completely stupid and yet somehow charming and loveable.

The cinematography is clean, crisp and despite some occasional poor lighting, very clear. This isn’t your typical shot on mini-dv first time trying to make a movie type of film. It’s got a few ameturish moments here and there but over all its got a nice solid look and feel. PJ Starks, the director, uses the set to his advantage both as a setting for the story and as a prop to help build production value.

The music used throughout the film is a nice electronic orchestral style, reminiscent of an early John Carpenter movie, with a few non-orchestral songs thrown in for good measure. The gore effects are what stand out to me in this film. There are plenty of interesting death scenes most of them ending in a healthy gush of blood. My favorite gore scene takes place when one of the employees finds one of the first victims and slips in a puddle of blood, triggering a torrent of blood and organs from the hanging victim. It was brilliant.

Despite its cliches and sometimes silly dialouge, Hallows Eve: Slaughter on Second Street is a solid horror film that won’t scare most seasoned horror fans, and should elicit a good chuckle and applause from fans who love a twist on the typical slasher film.

Well, that’s all the time I have for this episode Boils and Ghouls, join me next time for Indie Scares Vol.4 I’m Cenobite Dave, and I’ll see you all the next time you venture into the Labyrinth.