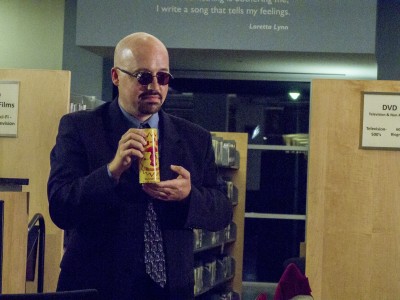 Jim O’Rear has been a fixture in the world of indie film for close to thirty years. He’s an actor, writer, stuntman, and director (I know I’m leaving some titles out) who has appeared in a countless amount films and television shows throughout the years. He’s even a accomplished magician who opened for the likes of people like David Copperfield, Harry Blackstone Jr., and Cheap Trick. He’s still slaving hard for his art and recently took the time out to speak with me about his latest project, the superb anthology horror film VOLUMES OF BLOOD, and this is what his diabolical mind came up with.

I’m really interested in your career as a magician. Can you tell me a bit about how you started and is it something you still practice today?

I had always been interested in the art of magic, as a child, and started studying how to be a magician while I was in kindergarten. It was Disney’s Haunted Mansion ride that sparked my interest in illusions. Before long I found myself traveling around the United States as “The Youngest Professional Magician” and working with people like Harry Blackstone Jr, David Copperfield, and The Great Tomsoni. Then, one night after a magic show, I was approached by a television producer who was interested in casting me in a television commercial. I turned him down because I was not interested in acting and really didn’t think I could do it. He was persistent, though, and after a week or two of begging me, my agent, and my parents, I finally caved in and did his television commercial. From there I started getting hired for other acting jobs in television, film, and live theater and that didn’t really leave much time to continue doing magic.

You lived every hardcore horror fans dream by being a zombie in a George Romero film, did the experience help start your career?

It didn’t really start anything, actually. It was, basically, just an extra role in an indie zombie film. I almost didn’t do the film. I was in Florida, at the time, preparing to start college and my agent told me that they were looking for zombies. She said it didn’t pay anything but it might look good to have the credit on my resume, since I had done very little film work at that time. I took the set location information from her but decided not to go. It wasn’t until the day of the shoot and I heard the film company’s desperate plea for zombies on the radio that I decided, at the last minute, to drive to Ft. Myers. They had planned on filling the streets with thousands of zombies but very few people actually showed up, so they contacted all of the radio stations to see if they could get people to come down there and participate. It was just another independent zombie film, as far as most were concerned. No one knew it would eventually gain cult status, but it’s still the least-liked of Romero’s original trilogy. I enjoyed it, though.

The amount of different tasks you’ve performed for a film is staggering (make-up, wardrobe, casting, etc), what is most rewarding for you?

I think the writing and the editing because that’s where the film is actually made. Writing is a great creative outlet because you are creating everything…. the characters, their words, their actions, their worlds, etc. In editing you’re putting all of those pieces together and giving it all a rhythm. There’s great satisfaction when those two things are going right. 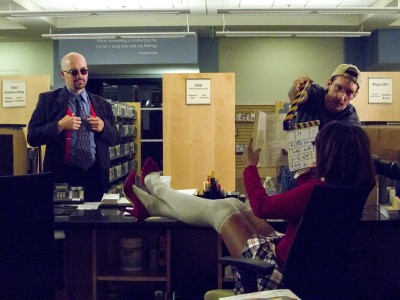 How exactly did you become involved the VOLUMES OF BLOOD segment “A Little Pick Me Up”?

P.J. Starks knew my work from some other films and came to meet me at a convention appearance. He told me that he was a filmmaker and that he wanted to work with me one day when the opportunity arose. When he started organizing VOB he sent me a message and asked if I would be involved. I liked P.J. and his spirit from the time that I met him, so I agreed without even seeing the script first.

What did you find attractive about your character Lucem Ferre and what do you perceive him to be?

Many would see Lucem as a villain, but he, actually, is just who he is… if that makes sense. Many actors would probably choose to play him as a villain, but to me he’s just a person being who he is (which is actually Satan in disguise). There’s no need to play him as a bad guy because, as far as he is concerned, he’s not. I like characters like that… people that just are who they are.

How long did it take to shoot and could you tell me a little bit about working with your co-star Alexandria Hendrick?

The shoot went really quickly, actually. I was probably on set for only about 4 or 5 hours. It was a smooth shoot. The cast and crew knew what they wanted and everyone just fell into the groove. Alexandria was a treat to work with… very natural, funny, and easy to play off of. It didn’t feel like work. 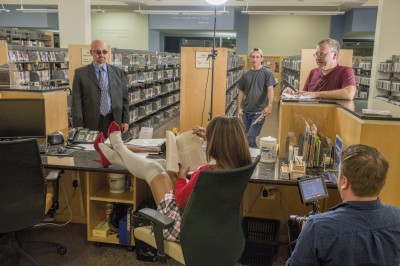 In that particular story you’re some sort of evil salesman but in another story we see his face and name as the author of a book. What could all this mean????

You’ve worked on big budget films, indie films, and popular television shows, what are some of the differences working within them?

I love working in indie films because of the creativity and freedom you’re allowed. No matter what your job is on an indie film, you are an important part of the process. On a big budget production, you are, basically, just meat. They call you “The Talent,” and that’s it. Everyone has a distinction and category, usually assigned by the union, and you shuffle around in your little categorical box like a trained monkey and then go home. Of course, the pay is MUCH better on a studio project. I make five-times what I normally make on an indie film working on a studio project, but the self-satisfaction from being a creative person is nowhere near as great.

A new project you’ve worked on is called DEATH METAL. Now I’m a nut when it comes to rock n roll horror films and I need to know more. What can you tell me and who should I talk to?

I haven’t actually worked on this film yet, but am supposed to pretty soon. It’s a mixture of monsters, music, and metal. Probably your best bet to find out more info about the film is on their Facebook page.

Any other upcoming projects you would like to talk about?

Be on the lookout for Don’t Look In The Basement 2. It’s an awesome sequel to the cult classic from 40 years ago. It’s a fantastic psychological thriller with some outstanding performances. Also, The Hospital 2 will begin screenings soon… the sequel to our controversial film from a couple of years ago that banned in several countries. I’m also about to start filming Truth Or Dare 5, the next installment in Tim Ritter’s cult series, with Scott Tepperman. There’s a TON more, so the easiest way to keep up with it all is through my website WWW.JimORear.com and my Facebook Pages JimORear and JimORearFanPage.