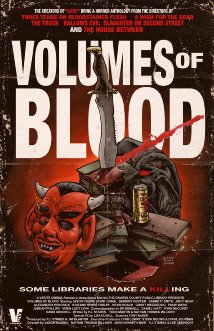 A sociology student gathers several friends at the local library on Halloween night to help him create a new urban legend with deadly consequences.

Among all of the varied sub genres to be found under the horror banner, the anthology is my favorite. Why? Because with a good (or even a not so good) anthology film, there’s always the possibility that at least one of the stories is gonna be a good to great one. That’s one of the advantages of having a film comprised of 3 or more short stories, odds are there’ll be at least one story that strikes your fancy. The best examples of horror anthologies are classics like Dead Of Night (1945), Dr. Terror’s House Of Horrors (1965), Tales From The Crypt (1972) & Creepshow (1982). Another example of why I love horror anthologies so much is that you don’t need a lot of money to make a good one. Actually, the very nature of the genre lends itself to low budget film making, you don’t need a lot of money to make a decent anthology film – but you do need some good stories. The latest anthology film to come across my desk is called Volumes Of Blood, and it has a fairly original setup to get it started: Four college students meet in a library to discuss their original ideas for creating their own “Urban Legends” – and each of their stories is a segment of the film. What’s interesting about their stories is that all of them take place in the very library they’re sitting in, and all of them offer a take on some very familiar horror tropes. 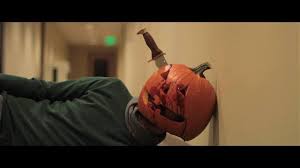 After a imaginative opening sequence (which turns out to be a film being watched on a cell phone by a student during class), and the introduction to our four storytellers, the stories begin. The first one is called A Little Pick Me Up, written by Todd Martin and directed by John Kenneth Muir. It’s a quick little ditty about a mysterious man offering tired students the chance to try out a new energy drink that’s guaranteed to blow their minds – literally. It feels a bit too familiar & ends very predictably, but it’s over quickly and offers a nice introduction to the proceedings. Ghastly, written & directed by P.J. Starks offers an interesting take on the classic ghost story and features a ghost haunting the aisles of the library after closing time. Ghastly is also shot in glorious black & white, which makes it stand out amongst the other offerings in the film. 13 After Midnight written by Todd Martin & directed by Jacob Bilinski is the most humorous tale in the film, and features the best performance in the film as well. Grant Niezgodski plays Norman, the wise guy boyfriend who keeps harassing his girlfriend as she’s trying to finish up her studies. He eventually agrees to leave her alone, but someone stays in the library with her – someone who has bad intentions on his mind. Encyclopedia Satanica, written by Todd Martin/Nathan Thomas Milliner & directed by Milliner, is about a woman being haunted in the library by her deceased boyfriend. He committed suicide after discovering that she had an affair with his best friend, and he wants his revenge. It’s a bit different form the other stories because it has a more adult tone to it, it’s played very seriously and has a satisfyingly gruesome finale that sets it apart from the other entries. It all ends with That’s A Wrap, written by P.J. Starks & directed by Lee Vervoort. Oddly enough, this is a bit of a departure from what preceeded it in both tone and gore quotient. It’s sort of a “Meta” take on the whole thing and while I understood the intention behind its inclusion, it felt a bit unfocused and stark as it began. Luckily, it all came together after a few minutes and ended up to be a nifty (if way overlong) finale. It’s not the usual anthology fare to be sure, and the fact that it’s here proves that the film makers had loftier ambitions in mind for their film. 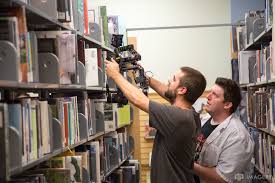 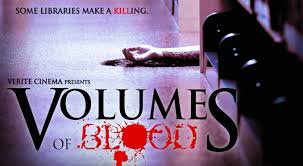 Volumes Of Blood is a decidedly low budget affair, and it suffers from a visual standpoint because of that. But there’s a sense of “We can do this!” that runs throughout the film which really enlivens the entire production quite a bit. The ultra low budget doesn’t drag the whole thing down nearly as much as you might think, and there’s a genuine good vibe that runs throughout the film – it’s hard to dislike it. But that isn’t to say that there aren’t problems besides the low tech look to it either. Although most of the actors comport themselves well, there are a few that could barely stand their ground in a high school play, let alone a full fledged feature film. Additionally, while the stories all offer nice variations on some well worn horror tropes, a few of them feel clumsily written. They all vary in both tone & substance, but they all succeed for the most part, save for A Little Pick Me Up, which opens the film well enough, but is too brief and predictable to make much of a impression. That’s A Wrap is a nice way to end the film, but it goes on for far too long and nearly loses the goodwill the film works so hard to earn from the viewer. 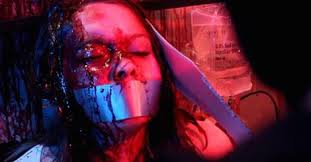 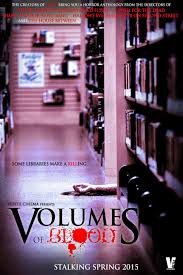 All in all, Volumes Of Blood is a good little horror film that will definitely keep you glued to the screen. It’s fallacies are ones that exist not from lazy film making, but from a low budget, and it can’t be faulted for that. Thanks to its denouement, it runs a bit longer than necessary, but that shouldn’t put anyone off from viewing it. It’s a excellent example of what can be accomplished on a low budget by dedicated film makers with vision & dedication to their craft. It’s currently making the festival rounds, where it’s sure to make some noise before it gets a general release – and it’s well worth your time to watch it when it becomes available.