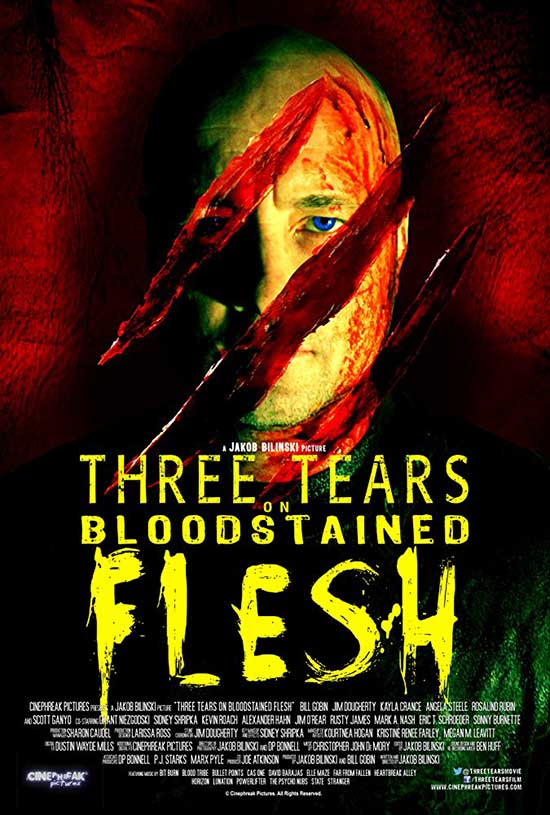 A modern, Midwestern spin on the Giallo about a man with a sordid past who returns to the small town he abandoned to bury his niece. Convinced she was murdered he begins uncovering the town’s dark secrets, racking up a very high body count.

Three Tears on Bloodstained Flesh might sound like the title of an Italian film from the 1970s directed by Dario Argento or Lucio Fulci, but nope, it’s actually a new Unearthed Films release shot in the southern tip of Indiana. Written, directed, produced, and edited by Jakob Bilinski (who also directed a segment of the locally-made anthology film, Volumes of Blood), Three Tears… supplies a good number of twists and turns, and has even been hailed as a modern-day Midwestern giallo. Quite a loaded description there, but a lot of people are brutally murdered by a mysterious masked killer wearing the requisite black gloves, so it’s certainly off to a good start. I wonder what bottle of booze would show up instead of J&B in the Midwestern giallo? Jameson? Or just a case of Pabst Blue Ribbon? 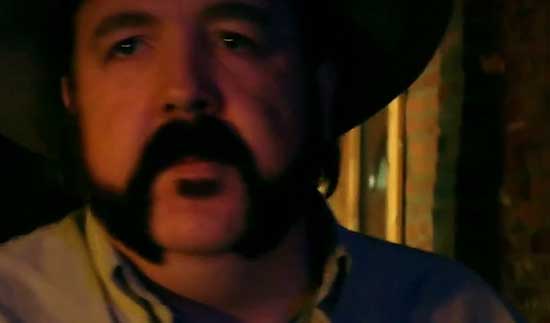 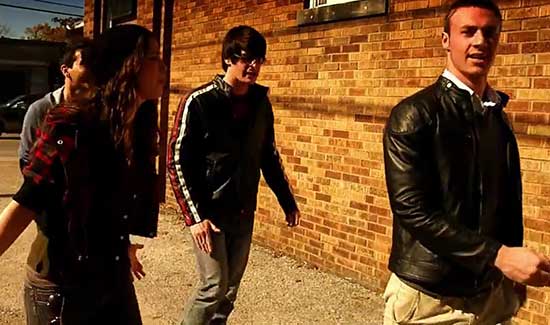 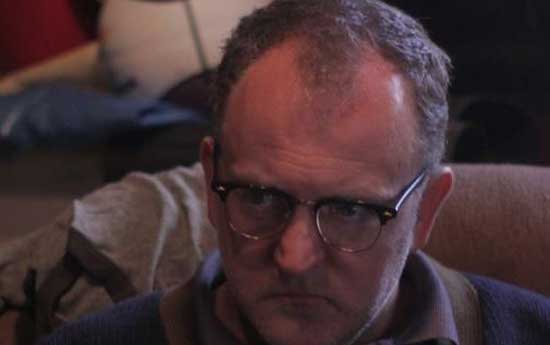 Bilinski’s film jumps right in, as a young woman (Lexi, played by Sidney Shripka) is chased into the woods by a man in a mask and trench coat. He catches her and stabs her with a knife (a key giallo touch) and she dies, her bright red blood against the deep blues of dusk a nice juxtaposition of vivid colors. Who was this masked man, and why did he kill this woman? These are the questions that Dominic “Nick” Merrick (Bill Gobin), Lexi’s uncle, plans on answering, no matter who he has to rough up in the process. When he and his angst-ridden daughter, Kendall (Kayla Crance), return to the small town where he was from for the funeral, they soon find themselves in the middle of a city with lots of dark secrets and lots of suspicious characters, any of whom could potentially be the killer. And then it all gets a whole lot stranger. 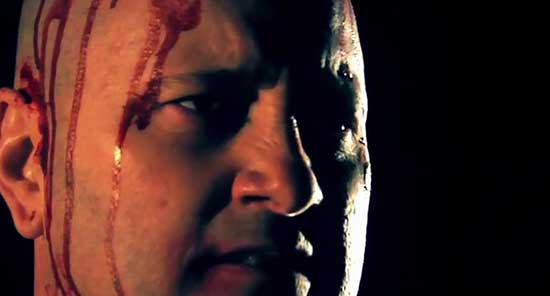 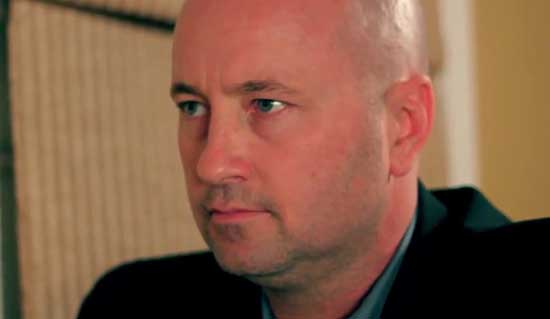 Three Tears on Bloodstained Flesh is a lot like manic depression: there’s some really good parts, and some really bad parts, and only a little bit of time spent in between the two extremes. If you demand a high body count in your horror films, you’ve come to the right place. As I mentioned before, we start off with a quick murder, and then after a little bit of time is taken to establish our characters, the bodies start to really pile up. And some of the kills are pretty brutal too. This isn’t an overly gory film, but instead picks its spots and hits you with some good blood and guts when it really counts. 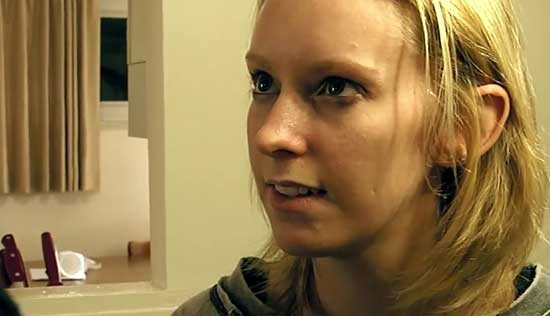 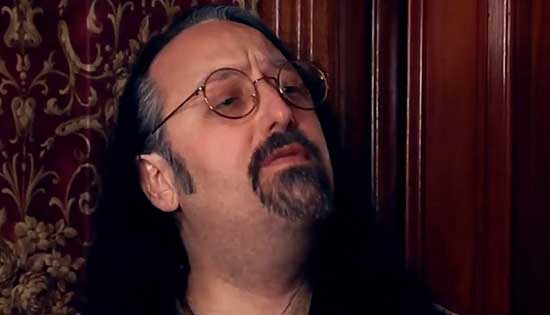 Three Tears… is a low budget, independent film, but it is shot nicely and looks pretty good overall. Unfortunately, it also suffers from some of the same things that so many other films of its type do. Bilinski’s story is great, but his dialogue is tough to swallow. Everyone talks in that tough, overly-crude, always angry voice that has earned filmmakers like Rob Zombie so many haters. And this gets doubled when the guy is talking to or about a woman. In small doses, a creative cuss or put-down can be great. When every character spouts them like they’re going out of style, they quickly do, and it becomes tedious to listen to their conversations. And tedium is not something that can be easily forgiven when you’re looking at a film that is almost 2 ½ hours long, something a tighter edit could have helped quite a bit.

All that said – and I can already guess that this will be a point of contention – it is the over the top story full of twists and turns that really shined here and kept me interested through to the end. The film starts as a crime story, a whodunit where Nick tries to find the killer of his niece, but then takes some absolutely wild and crazy turns. Soon, we have potential cult elements, maybe even supernatural elements, making their way to the forefront, and we can’t help but wonder if the murder spree isn’t something much larger than we originally were led to believe. 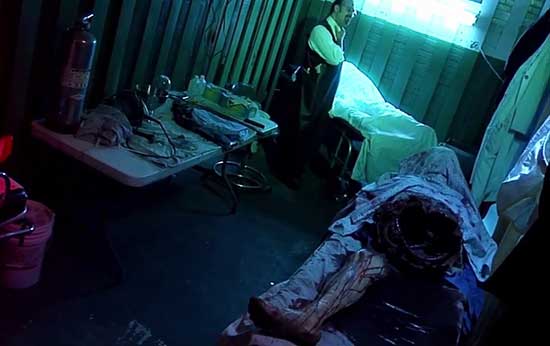 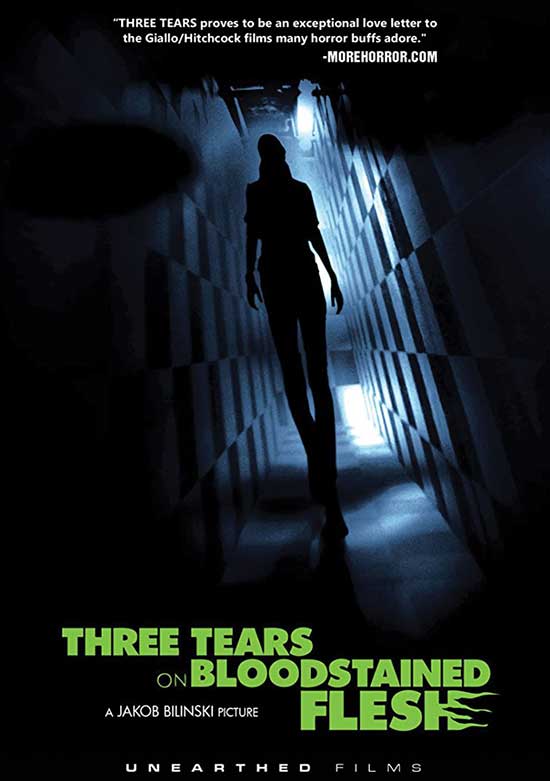 Next thing you know, Bilinski seems to channel the spirit of Michael Winner and goes Death Wish on our asses before throwing a couple of almost unbelievable twists at us to reveal the killer and close out the film. Some audiences (and critics) will no doubt point to this series of craziness as the movie’s downfall, and say that the twists were convoluted and the story “couldn’t decide what it wanted to be,” like that even makes any sense. But I’ll tell you right now, the very best part of the Three Tears on Bloodstained Flesh experience is the wild ride we get taken on, despite the (occasional) shaky acting and (almost constant) rough dialogue. This certainly isn’t the most impressive offering by Unearthed Films, but it is worth a viewing, and it shows us a young filmmaker with a good deal of promise and potential.