Home | 4 Toho Godzilla Double Features on Bluray! Count me in!

4 Toho Godzilla Double Features on Bluray! Count me in! 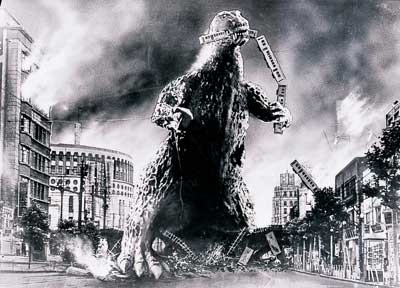 Beginning with the introduction of the original Godzilla film in 1954, and continuing through today, the King of the Monsters has entertained generations of movie fans through his big-screen adventures.  In celebration of the 60th Anniversary of the iconic franchise, Sony Pictures Home Entertainment will debut four classic Toho Godzilla Double Features for the first time on Blu-ray with Digital HD UltraViolet on May 6.

Franchise fans can also relive the original theatrical trailers and teasers from the series, included within these sets. Additionally, the Godzilla: Tokyo S.O.S Blu-ray includes a making-of featurette, while Godzilla: Final Wars includes a behind-the-scenes featurette.

One of the Most Iconic Monsters in Film History

With the Release of Four Toho Godzilla Double Features

Godzilla vs. King Ghidorah+ Godzilla and Mothra: The Battle for Earth

When a mysterious U.F.O. is seen flying over Tokyo, tension mounts, until the crafts occupants reveal themselves to be friendly aliens from the 23rd century who have come to warn mankind that Godzilla will soon awaken and wreak havoc upon the earth unless he is destroyed. Meanwhile, a double threat arrives in the form of King Ghidorah, Godzillas flying three-headed archrival and an evil and all-powerful android. The suspense builds to terrifying levels as the aliens sinister mission on Earth is gradually revealed and Godzilla must wage a solo battle against these evil forces who want to destroy mankind. High-tech special effects and awesome action highlight this present-day Godzilla epic.  Godzilla vs. King Ghidorah has a run time of approximately 100 minutes and is not rated.

Godzilla and Mothra: The Battle for Earth (1992)

After a series of earthquakes unearth a gigantic orb, a trio of Japanese explorers are dispatched to the mysterious Infant Island to investigate. There they discover the islands sole inhabitants, miniature twin women whose duty is to protect the mammoth ball, the egg of Mothra! When the explorers attempt to bring the egg back to the mainland, a furious Godzilla awakens from the depths and attacks the party, causing the egg to hatch and forcing its newborn larvae to fend off the gigantic monster. The humongous worm holds its own until help arrives in the form of Battra. When Mothra and Battra metamorphose into flying monster moths, the battle rages on land and in the sky. With two powerful foes to reckon with, has Godzilla finally met his match?  Godzilla vs. Mothra has a run time of approximately 100 minutes and is not rated.

Built with the utmost in 20th-century technology, Mechagodzilla is the ultimate in Godzilla-busting weaponry. Fueled by a nuclear reactor and sheathed in a synthetic diamond shield, the mammoth metal robot is Japans greatest hope for ending Godzillas reign of terror.  Meanwhile, on a remote island polluted by nuclear waste, a team of scientists discover a giant egg in a Pteranodon nest, and bring it home for study. When BabyGodzilla hatches, both Rodan and Godzilla return to claim the cuddly infant as their own. Will their monstrous maternal instincts cause a custody battle capable of destroying Mother Earth? Or will Mechagodzilla prove an effective eradicator, leaving BabyGodzilla an orphan for life? Godzilla vs. Mechagodzilla II has a run time of approximately 105 minutes and is rated PG for sci-fi monster violence and some language.

The powers of telepathy enter the ranks of high technology in this supernatural, super-powered Godzilla adventure! The military minds behind Japans special Counter G Bureau enter the New Age with Project T, in which a telepathic amplifier is implanted in Godzillas brain in order to bring the giant monster under control. And just in time! In a faraway galaxy, the mutant SpaceGodzilla turns its evil eyes toward earth, planning to terminate Godzilla and conquer the planet for its own. With the Japanese Mafia infiltrating Counter G, the Bureau needs all the help it can get. Will Japans greatest enemy Godzilla become its closest ally? Amid all the smoke and high-tech firepower, not even the psychics know for sure!  Godzilla vs. SpaceGodzilla has a run time of approximately 108 minutes and is not rated.

With a super-charged blast from his nuclear past, a new Godzilla emerges from his own ashes, radioactive and ready to take on Tokyo! The great monsters nuclear energy is increasing by the minute, and a monster meltdown threatens to vaporize the planet. But when mutant micro-organisms unleash a plague of destruction, Godzilla is Japans only hope to destroy them. This victory creates Godzillas deadliest challenge yet: Destoroyah. And with Godzilla Junior pulled into the ring, only the Super XIII can put the deep freeze on this three-way monster melee. The action is hot and the special effects are chillin in this high-tech, high-powered Godzilla thriller!  Godzilla vs. Destoroyah has a run time of approximately 103 minutes and is not rated.

Five years after Godzilla terrorized the city of Osaka, Japanese scientists have developed a sure-fire way to finally destroy Japans monster nemesis. They have created the worlds first man-made black hole, which will trap Godzilla for eternity! But during a testing of this new Dimension Tide, an insect caught in the hole mutates, producing gargantuan eggs that give birth to a new menace:  giant dragonfly monsters called Meganula. Meganula queen, the 50-meter Megaguirus, is also on a hunt for Godzilla, needing to steal his energy to survive. From the sky down to the depths of a citys underground sewer tunnels, Megaguirus, Godzilla, and humankind battle for supremacy. Who will prevail in this high-tech, three-way battle of terror and destruction?  Godzilla vs. Megaguirus has a run time of approximately 105 minutes and is not rated.

Mechagodzilla, the superior-armed, state-of-the-art, all-robot version of Godzilla, is undergoing repairs after his devastating battle against the worlds monsters.  Twin tiny women appear and warn scientists to stop rebuilding Mechagodzilla but their warning goes unheeded. As the great robot nears completion, a series of mysterious incidents rock the world and awaken Godzilla, who unleashes a reign of terror against Tokyo. Mothra joins him and Japans desperate Prime Minister has no choice but to launch the unfinished Mechagodzilla against Mothra and Godzilla.  But who will fight for whom?  And in the end — will the survivor be monster, robot or man?  Godzilla: Tokyo S.O.S. has a run time of approximately 91 minutes and is not rated.

Godzillas 50th Anniversary project and costliest adventure to date out of 28 films. Earth has been relatively peaceful since Godzilla was successfully buried deep in ice beneath the South Pole.  Then — sometime a few years hence — several of his old nemeses return to wreak havoc on cities worldwide. A huge spaceship suddenly appears and neutralizes all the monsters in a blink.  The visitors are Xiliens, who take human form and announce they would like to negotiate a peace treaty that would replace the United Nations with a United Universe.  They are indeed too good to be true, however.  It doesnt take long before their nefarious real purpose is exposed — conquering Earth.  Greatly outmatched, Earth officials decide to de-freeze Godzilla as mans only hope to vanish the invaders, as well as the monsters they control.  Only trouble is Godzilla is still mad at man for freezing him in the first place.  Godzilla: Final Wars has a run time of approximately 125 minutes and is rated PG-13 for intense sequences of violence.