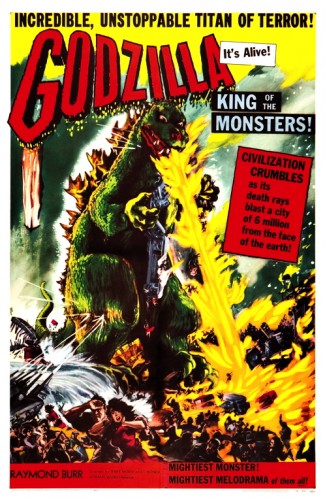 “Japan is thrown into a panic after several ships explode and are sunk. At first, the authorities think its either underwater mines or underwater volcanic activity. The authorities soon head to Odo Island, close to where several of the ships were sunk. One night, something comes onshore and destroys several houses and kills several people. A later expedition to the island led by paleontologist Professor Kyôhei Yamane, his daughter Emiko, and young navy frogman Hideto Ogata (who also happens to be Emiko’s lover, even though she is betrothed to Doctor Daisuke Serizawa) soon discover something more devastating than imagined in the form of a 164-foot-tall (50-metre-tall) monster whom the natives call Gojira. Now, the monster begins a rampage that threatens to destroy not only Japan but the rest of the world as well. Can the monster be destroyed before it is too late, and what role will the mysterious Serizawa play in the battle?” (courtesy IMDB)

1953 was a good year for archetypal science fiction films. It saw the arrival of the first film about a giant monster being awakened by atomic radioactivity and causing havoc before being finally overcome. Called The Beast From 20,000 Fathoms (1953) directed by Eugene Lourie, it obviously owed a lot to The Lost World (1925), King Kong (1933) and the Max Fleischer Superman cartoon The Arctic Giant (1942), but the topical gimmick of radioactivity made it seem fresh and new. The monster in The Beast From 20,000 Fathoms and subsequent imitations really represents the atom bomb itself as well as a form of divine retribution. The message is that mankind’s technology tampering with nature will only result in nature striking back and destroying mankind (the biblical connotations reached their extremes with another Lourie film, The Giant Behemoth (1959), which took its title from a passage in the Bible) – the same message propounded by the Mad Scientist films of the twenties, thirties and forties. The fifties, however, had the atom bomb itself to show what form that destruction might take.

Despite its small budget, The Beast From 20,000 Fathoms turned out to be one of the top moneymakers of 1953 and immediately began a trend. Soon atomic radiation was spawning all manner of monsters – giant reptiles, giant ants, giant spiders, giant praying mantises, giant scorpions, even giant people. Warner Brothers, who had made a fortune from The Beast From 20,000 Fathoms, followed it up with Them! (1954), the first of the giant insect films. Warner Brothers were accused of making a vicious allegory really calling for the extermination of communists. While the notion of giant Stalinist ants may be stretching things a little, the giant (and inevitably radioactive) monsters which spent their time knocking down cities in the fifties were euphemisms for the atomic bomb is a theory that has particular relevance in the case of Japan’s contribution to the genre: Godzilla (1954), the biggest euphemism of them all!

It seems oddly masochistic of the Japanese that they would, a mere nine years after experiencing the real thing, take so much pleasure in watching on their own cinema screens a vast monster with radioactive breath systematically leveling their cities. Called Gojira (1954) in Japan, it was directed by Ishiro Honda who also co-wrote the screenplay based on a story by Shigeru Kayama. The film launched Toho Studios on its long and sometimes laughable career of science fiction movies, mostly about giant creatures. Godzilla himself was the creation of special effects expert Eiji Tsuburaya, who made many more monsters before his sad passing in 1970, including Rodan (1956), the follow-up film that confirmed Toho had struck a rich vein. Like all subsequent Toho creature-features, the monsters were played by men in complex cumbersome rubber suits because stop-motion animation, the alternative technique for creating such monsters, was far too expensive and time-consuming. The characteristic sound of Godzilla’s roar, which is very rarely heard in the first film, was created by recording a contrabass (an extra-large double bass) and then distorting it electronically.

Godzilla is a 400-hundred-foot long, 200-foot-tall amphibious dinosaur with fiery radioactive breath (not too far removed from the traditional Japanese dragon) who makes a mess of Tokyo, munching on trains and creating the chaotic wasteland that is in fact the opening scene – most of the film’s story is told in flashback. Understandably grumpy from being woken up by the blast of an atomic test and leaving a trail of poisonous radiation in his wake, Godzilla makes his way from a fishing village across Tokyo Bay right into Tokyo’s most modern central district, the Ginza. While massive military mobilisation and high-tech electric fences around the city provide visual thrills to an enraptured audience, they do little to stop Godzilla. Only the personal sacrifice of a reclusive scientist (Akihoto Kochi) – who is revealed to be the very model of modern scientific ethics – makes it possible to defeat the monster, and finally eliminates Godzilla with an oxygen-destroying machine which, for some reason, disintegrates the creature entirely into its constituent atoms, and the scientist along with it. This leaves the survivors pondering the heavy burdens of the atomic age: Will mankind ever learn?

This didactic turn at the film’s ending also reveals another source of inspiration, the true story of a Japanese fishing boat named Lucky Dragon Number Five, accidentally exposed to radiation after a US nuclear test in 1954. In the opening scene of the film several boats are mysteriously lost at sea, a few survivors washing ashore days later. While this incident, ripped from the headlines, and other clues established the film as a key text in the history of Cold War science fiction, Ishiro Honda and his screenwriters enrich the nuclear theme with imagery that, for its original Japanese audience, harkens back to more complex historical trauma – the long special effects sequence of Godzilla stomping through Tokyo evokes the trauma of both the catastrophic Kanto earthquake of 1923 and, more urgently, the dropping of the atomic bombs on Hiroshima and Nagasaki, and the repeated firebombing of Tokyo by the US Air Force in 1945.

The movie began life as a 98-minute Japanese film called Gojira and won many awards and broke box-office records all over Japan. The Americanised version directed by Terry Morse eliminates a lot of Ishiro Honda’s material and introduces an American reporter by the name of Steve Martin (Raymond Burr) who serves as narrator and, in some cleverly edited scenes, appears to talk to the Japanese characters from Honda’s film. In this way it becomes reminiscent of the film Dead Men Don’t Wear Plaid (1982) coincidentally starring comedian Steve Martin. Raymond Burr had to react to people and events that were filmed two years earlier and, unfortunately, he’s not terribly convincing at it.

The film also gave American audiences one of their first opportunities to witness Japanese rage and disgust over what America did to them in August 1945. Morse’s version makes deletions to cover-up references to damage done by the atomic bomb but, ironically, he makes changes that further identify Godzilla with the atomic bomb. For instance, in his version the characters die from radiation poisoning. Director Morse has Burr tell us that Tokyo is evacuated before Godzilla’s attack, implying that the citizens of Hiroshima and Nagasaki were prepared for the attack. Knowing this wasn’t the case, Honda deliberately chose not to evacuate the city in his film, and inadvertently stuck Morse with a lot of footage that makes no sense in the US version: After Godzilla leaves, the hospitals are full of people who were supposed to be out of town. While the original version ends pessimistically, the Morse version ends optimistically: “The whole world could wake up and live again.”

Despite these alterations in order to make the film more palatable for Western audiences, it was an international hit, but what were the filmmakers going to do for a sequel after disintegrating their star attraction? Fortunately, a first cousin also by the name of Godzilla was revived to star in at least thirty sequels, some better, some much worse – like the deplorably lunatic Godzilla Versus The Smog Monster (1971). In most of the sequels Tokyo is squashed again but, as the years passed, Godzilla’s temperament softened until he became a Japanese folk-hero who grumpily defended them against the ravages of even more villainous monsters. The understandable Japanese sensibility to atomic weapons was quite an important factor in the making of the earlier films, but later the ‘Atomic Testing = Giant Monsters’ equation was not so prominent. The appalling innocence of these comic-book type Japanese monster movies has won them many devoted fans in the west.

As the fear of an imminent atomic doom has receded from the minds of most people, Godzilla has changed from being a threat to becoming Japan’s unofficial champion, defending the country against the threat of other giant monsters. The films became increasingly juvenile into the seventies, to the extent where Godzilla had developed a voice(!) and taken to conversing with his monster friends. He was a much more interesting character when he was knocking down Tokyo. Godzilla went on to acquire a reputation as pure camp among audiences due to four main reasons: Uno, it’s a man in a rubber suit. Duo, the poorly edited American version featuring Raymond Burr. Three-o, the increasingly juvenile tongue-in-cheek sequels, and four-o, they’ve never seen the original Japanese-language version. Measured against this undeserved reputation, the original film is surprisingly adult and serious in tone, competent in its special effects and convincing in its performances. It is certainly not ‘the guy in the rubber suit’ that many take it for – it warrants serious viewing. Hold that thought in mind – or between your knees – while I make my farewells and ask you to hit the highway to hell with me again next week while I drive you to delirium to witness another car crash on the boulevarde of broken dreams for…Horror News! Toodles!