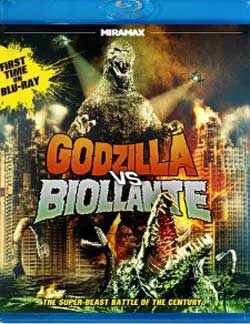 After rising from his volcanic grave, Godzilla is threatened by a mutated rosebush.

Oh man, is it just me or do some of these later Godzilla movies tend to veer towards some sort of statement about the ecological system and the crap they are putting in the water. Like the films: “Godzilla vs. the Smog Monster”, “Godzilla vs. Biollante” also adds this agenda to its script which in review had me getting sleepy-eyed thru alot of it. The movie is mainly in Japanese but also features a mix of English speaking Americans to its format. 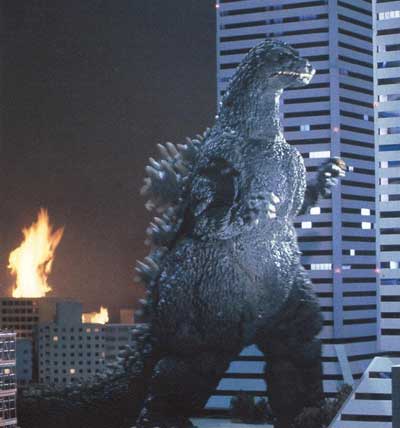 As we find Tokyo in ruins, a team of scientists pick thru the litter in search of Godzilla tissue samples. U.S. soldiers from a team called “Bio Major” make a run with a sample in hand only to be overpowered by a single mercenary. From here the script and premise starts to get a bit more complex with various subplots being thrown out. Dr. Shiragami has immersed himself in studying psychic energy after his daughter was killed in a bombing. 5 years later his research has been completed, with roses used as a focal point. Dr. Shiragami is aided by psychic Miki Saegusa.We also find the Dr. is being watched as he works on creating what they are calling ” Anti-Nuclear Energy Bacteria (ANEB)” to use as a weapon against Godzilla. The goal is to use the bacteria from this to kill off radiative materials (also in turn being a formidable weapon against Godzilla). 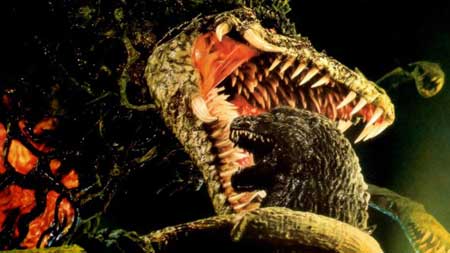 This continues with further chaos in the midst, but none as great as the creation of a new entity called “Biollante” which is seen as a giant flower at first in the lake. This thing or creature is laced with some human DNA (taken from Erika) creating this giant plant creature that now looms over the bay.

The odd thing here is that Godzilla is under government monitoring. Yep, they call it out in 4 stages I believe that ranges from sleeping to awake, to thrashing the city……etc. Godzilla hangs out in a local volcano and awakens when there is trouble. I’m never quite sure if he is officially a friend or foe, but he does tend to tear up the city every time he has to fight something. (note: by the end of the film, it was determined he is “indeed” a foe in this movie) 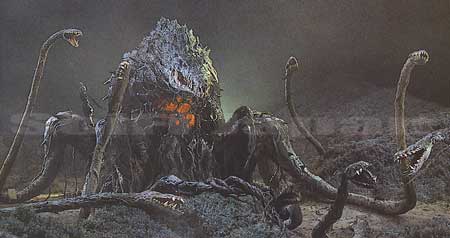 “Biollante” proves to be a worthy adversary with venus-flytrap-like tentacles popping out in a “snakes on the attack” manner. The creature (as we are told) is actually (sort of) another version of Godzilla due to its genetic makeup. So initially it calls Godzilla to the mainlands, but then attacks him when he arrives. In between all this we are shuffled back and forth between talks of organics testing, military planning and a bacteria made from the substance of Godzilla used to counter-attack him. “Biollante” (like in most of these Godzilla films) kind of puss’s out initially but is later reborn from its seedy materials. Traditionally Japanese films try to employ some sort of spiritual inclusion (which is seen later as the spirit of Erika raises to the heavens). Overall it’s a decent Godzilla film and stays within the guidelines out for his franchise. I was impressed that the military thought of creating a mirror reflection aircraft to zap Godzilla back with his own radioactive fire, though even with synthetic diamond-constructed materials, it can’t stand an onslaught of “zilla” fire power. 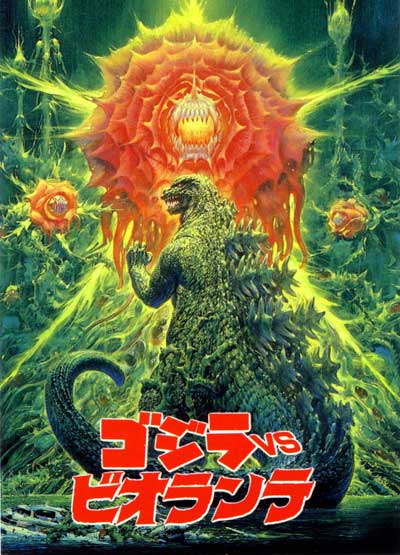 My takeaway here is that these films are still generated to mesmerize a younger audience. Godzilla is cool, but can get tiring and predictable. I suppose we’ve been spoiled with films like “Clash of the Titans” and “The Avengers”, however roots can be fun! 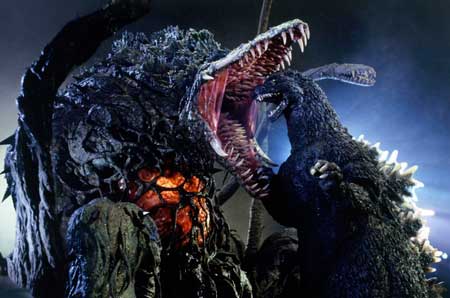 Quality: Godzilla vs. Biollante arrives for the first time in blu-ray from Echo Bridge Entertainment (and of course Miramax). The resolution appeared to work for my screen without pixelation, but also at a cost of being really grainy. My guess here is that the original film footage was rough to work with and had to be noised up to create a higher output. Fine and watchable, but be warned very grainy. Fans of the zilla frnachise will want to add this one right away!

Godzilla vs. Biollante is now available on bluray per Echo Bridge Entertainment