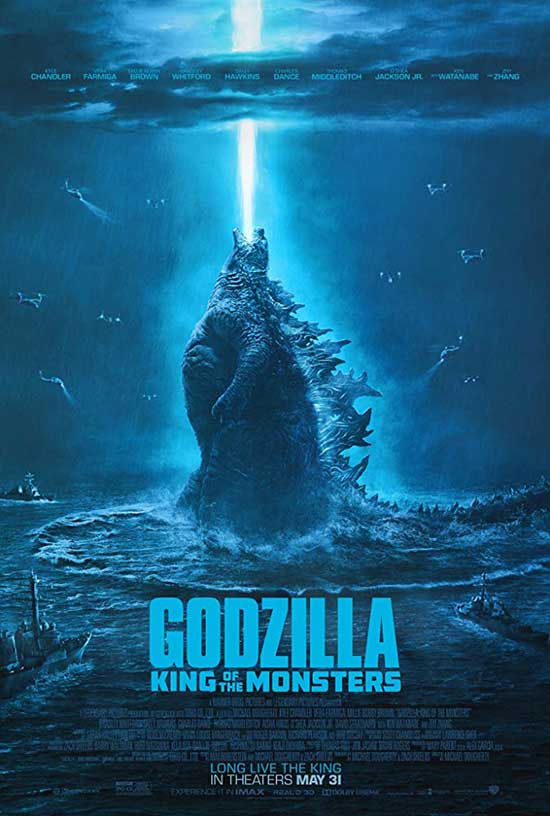 When a new threat surfaces, the King of the Monsters is forced to return yet again to restore balance. The King of Monsters will be back on the big screen in 2019, he’s rumored to be bringing a few friends. (Rodan, Mothra and King Ghidorah as potential future foes).

Godzilla: King of the Monsters (directed by Michael Dougherty), the sequel to the 2014’s Godzilla, is a fun and action packed monster movie that aims high, but ultimately falls short due to a lot of sub-par CGI, lack of character development, and a shaky plot. The overriding theme of the movie presents two sets of theories or beliefs regarding the re-awakened titans with one side believing they need to be destroyed and the other side believing that they can co-exist with them in order to restore balance to the Earth. While this narrative is pushed throughout the movie, the characters pushing these beliefs don’t really seem convinced themselves. To add, most dialogue is drenched in mythology or science lessons that give little depth to the characters, so that when they are killed off it is almost irrelevant. Couple this with some shaky and murky/dark scenes where the special effects were just not clear enough to capture the details of each titan battle and you get a film that is somewhat entertaining, but also rather forgettable.

The movie opens with a scene from 2014’s Godzilla where we see the three central characters of the film, Dr. Emma Russell (Vera Farmiga), Dr. Mark Russell (Kyle Chandler), and their daughter Madison (Millie Bobby Brown from Stranger Things) watching in horror as Godzilla destroys the city. Their son Andrew was ultimately killed in this first installment and this sets up a lot of the motive and tone for this 2019 sequel. Following up with the family we find out that Emma and Mark are now divorced with Madison residing with her mother and maintaining inconsistent contact with her father. Mark is an animal behaviorist who feels the titans need to be destroyed and blames Godzilla for the death of his son. Emma, on the other hand, is a paleobiologist who feels they need to try to co-exist with the titans and they may hold the key to saving the planet from human inflicted environmental destruction. We are led to believe this created some discord in their relationship, which ultimately led to their split.

In this installment, Mark has left Monarch, an organization tasked with finding and researching the titans, but Emma is still working for them. It’s here Emma and Madison witness the birth of Mothra and use the “Orca” (a device used to calm or control the titans) to calm the titan down when it starts flipping out and destroying the lab. A group of eco-terrorists then attack the lab, killing everyone except Emma and Madison, who they kidnap and take to Antarctica. Mothra escapes during the commotion and we don’t see the titan again until later in the movie.

Two Monarch scientists contact Mark Russell and enlist his help in tracking down his family. They find them in Antarctica, but quickly determine that Emma is actually helping the eco-terrorists and plans to release all the titans to help save the planet, starting with a titan nick-named “Monster Zero” encased in ice in Antarctica. The team travels to Antarctica to stop them and save Madison, but Emma releases Monster Zero and an epic battle with Godzilla ensues. Godizilla loses this battle and takes refuge in the bottom of the ocean to recuperate. Emma convinces Madison to remain with her and they flee with the eco-terrorists to a location in Boston. Emma then wakes another titan in Mexico named Rodan and communicates her plan to wake all the titans and restore the Earth’s natural balance.

It’s at this point that all goes to Hell with Monster Zero being discovered to actually be King Ghidorah, an alien who doesn’t belong on Earth and can command titans to do his bidding. Emma begins to realize that the Earth will face more destruction than she imagined and starts to have second thoughts about her plan. Meanwhile, Madison steals the Orca, fleeing to Fenway Park, where she activates the device to draw the titans to her location.

Mark and the team at Monarch realize they need to wake Godzilla in order to fight and defeat King Ghidorah. They detonate a nuclear device in his lair in order to speed up his rehabilitation. The plan works and Godizilla goes to Boston to fight Ghidorah. Ghidorah looks about to defeat Godzilla again when Mothra arrives to assist Godzilla in the fight. Mothra is fatally injured by the Ghidorah controlled Rodan in the process, but Mothra transfers her energy to Godzilla, which enables him to get back in the fight. It’s discovered by the remaining Monarch team members that Godzilla is about to go thermonuclear and they must flee the city. Emma grabs the Orca and leads Monster Zero away from the team and her family, ultimately sacrificing her life in the process. Godzilla goes nuclear, melting everything in his path, and kills Ghidorah. 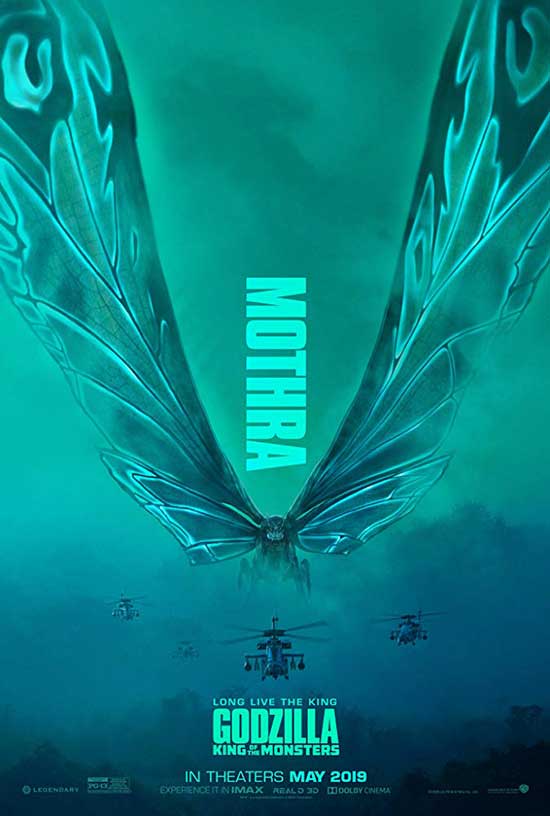 The end credits run through clips of news articles and report the titans making their way toward Skull Island, while their radiation heals the planet in their wake. This confirms that Emma may have been a bit mis-guided in her plan to wake all the titans and cause mass casualties and destruction, but she wasn’t wrong in her theory that the titans have the power to restore the Earth and ultimately save the human race from destroying itself.

The film is fun to watch and the battles between the titans are fascinating given the sheer size of the monsters and the destruction they cause, but the special effects could be better. Much of the movie had the monsters battling in the rain and dark. I believe this was intended to set the tone, but it also made it hard to see the details of the battle or see each monster in any great detail. At a time when you would just like to sit back and enjoy a battle scene, the background and camera angles make you work to understand what is going on just a bit too much, which for me kind of ruins the scene. However, the high quality sound effects used to display the massive size of these monsters coupled with the background music made these scenes more exciting. 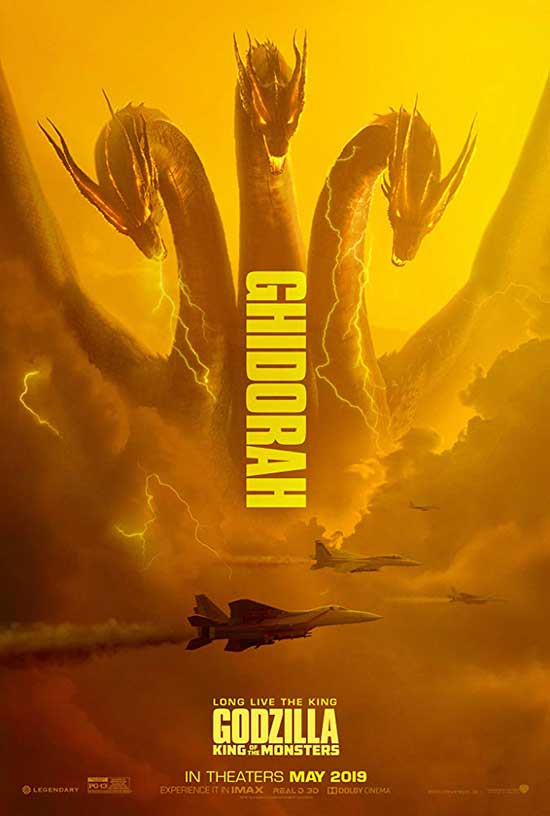 The acting and character development was also a bit weak for a big budget, Hollywood studio produced film. There was a lot of narration of events from each character and I didn’t ever feel like I really got to know any of them on a deeper level. For a movie that is meant to evoke a lot of emotion it mostly fell flat. I believe the characters would have benefitted from doing a lot more “show” and a lot less “tell.”

The plot of the movie and some of the story are also a bit confusing. Emma justifies her decision to Madison as a way to honor Andrew’s death. We don’t really get any explanation as to how committing mass murder by the way of rampaging titans avenges the death of her son, but there it is. Also, the story line is a bit hard to follow with so many characters exchanging long winded dialogue, several monster battles taking place in various locations, and characters being killed off without much notice. Finally, the ending was rather predictable from early on. (*Spoiler) As soon as it was revealed that Emma was running the show in releasing all the titans and takes on the role as a central villain, I knew she was going to sacrifice herself by the end of the movie. 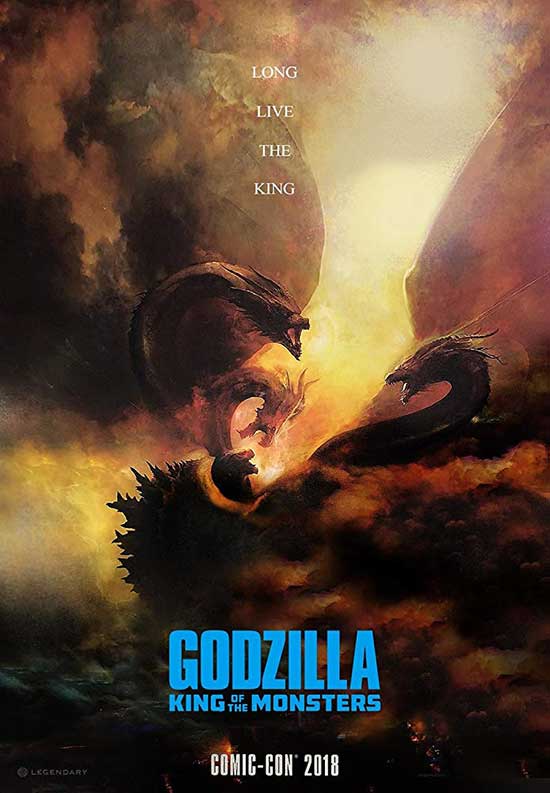 Overall, the monster battles are entertaining and I found the story of the titans existence and natural presence on Earth interesting, but the lack of character development was this film’s biggest flaw. However, I enjoyed most of the movie despite these flaws and I’m hoping they work out some of these issues for the next installment in the series, Godzilla vs. Kong.