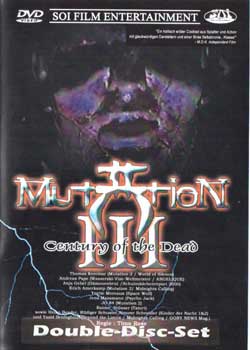 I’m going to start by saying that it is very telling that in 2007, Mutation 3: Century of the Dead (aka M III), with its 100 minute runtime, and Mutation 2: Generation Dead, weighing in at 85 minutes, got edited together to form one movie, Mutation: Annihilation, a movie that despite the added special effects ended up only 72 minutes long. What that means is there is a ton of extra, unnecessary fluff in both films that could be (and was) cut without ruining the story. Let me add on that these Mutation films are some of the earliest movies by writer/director/actor extraordinaire, Timo Rose. It is evident that he has grown as a filmmaker (see Game Over, Unrated: The Movie, and the TV series, Nature), so it’s tough to go back and judge his work as a beginner…but judge we will!

As you may remember from some of the other low budget German splatter/horror films, there are not always English subtitles available. Unfortunately, Mutation 3 falls into this category as well, so some slack must be given. But it doesn’t take an understanding of the language to notice that 25 minutes pass before we get a glimpse of anything related to a “mutation,” and it’s not until the 50 minute mark that we get some semblance of the dead rising from their graves. What we do have a plethora of, up until the halfway point, is various people getting phone calls, talking, walking, then getting another phone call. But we already know they chopped this movie up, so it’s a moot point to argue how it could have been fixed…it already was.

With part 3, we have the return of many familiar characters: Mr. Goldmann (Thomas Kercmar), Benny (Andreas Pape, director of Kettensagen Zombies), Tom Kaminski (Timo Rose), and the superhuman Erich (Erich Amerkamp). Unlike most part 3’s, this one doesn’t really jump the shark or change directions or even sub-out all the cast for new characters. It continues directly from part 2 and trudges forward, bringing us to an explosive conclusion to the story…if we’re able to make it to the end. Along the way, there’s lots of betrayal and backstabbing, lots of bullets to heads by lots of different shooters, and lots of wondering what exactly any of this has to do with mutations or super-soldiers or any kind of monsters that we saw in previous installments of the series.

Like I said, no English subtitles here, which causes us to lose a lot of the story. Luckily, special effects know no language barriers. However, unlike part 2 which featured the effects work of Olaf Ittenbach (director of Premutos and Black Past, to name a couple), here the effects are in Timo Rose’s hands. And he does a pretty good job, to be honest. There’s a weed wacker to the face, multiple crushed skulls and severed limbs, and lots of blown apart heads. And then, of course, we have the undead effects, which you can assume are gory and bloody and fun all around.

I can’t really recommend this movie. Of all the Timo Rose movies I’ve watched, the Mutation series come across as the least exciting and the most convoluted. Again, I have to assume that a big part of that has to do with the language issues, so I can only speak on the visuals and what I can piece together of the storylines. But it just seems like so much is packed in here, but still doesn’t really go anywhere. If I were to recommend a movie of Rose’s, it would not be Mutation 3: Century of the Dead or any of the series. Any of his more recent films, since maybe 2007 or so, would be a better place to start, plus most of those have subtitles for us German language-impaired viewers. There are some fun scenes here, but as a whole, Mutation 2 seemed the high point of the series. In the end, I’m glad I was able to see the finale of part 3, but I won’t be watching this one again anytime soon.