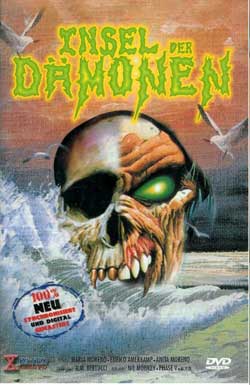 Sport diver Mario and his two women friends sail out to a small island off the coast of Italy. There he discovers an old wooden chest at the bottom of the ocean. In it he finds a knife whose cut releases the seed of a demon

This is classic gorehound fodder. We open with images of a castle overlooking a great body of water rotating on the screen as a deep, eerie German voice says something ominous sounding (here we also encounter a classic German horror trope: no English subtitles). We find ourselves peering into what looks like the torture chamber of the castle, and a bloody pair of hands reaches forward toward a lifeless body bound against the wall. Lifeless as in it is obviously a mannequin. Two fingers poke into the eye sockets, accompanied by loud squishy sound effects.

Blood pours down his face just before his head is sliced from his rubbery latex body. We see a knife with a skull on the tip set in the corner behind a small fire, then that image cut and interspersed with more images of the castle. Outside, along the rocks, we see a skull that resembles a funnel cake from the fair with too much sugar on it, then a severed hand in the ground, and another skull.

And so begins Die Insel der Damonen (or Island of the Demons), a shot on video movie by German splatter/p*rn director Andreas Bethmann, or as he goes by here, A. M. Bertucci. Unfortunately, that’s about as good as it’s going to get, at least for the next seventy minutes or so. We quickly realize that this idea would have translated so much better into a short film rather than stretching it out into, well, a very long short film.

We first start to cringe during the opening credits. At first glance, it seems like we are just watching an opening credit sequence set against the backdrop of some kinda fun, underwater camera work that ends in a skull against an underwater rock formation. When we see this exact same sequence two more times, each time seeming more drawn out, we have the perfect summary of our movie. Too little substance stretched out over too long a running time.

The storyline of Die Insel der Damonen doesn’t do itself any favors either. A woman in a short skirt is walking along the street. As the camera continues to focus on her legs, we realize that she is still walking. Eventually she hurts her ankle and stops. We get a slow-motion, Evil Dead/Raimi-esque camera approach right up to her, and we have to assume she is being attacked. Nope, it’s just some bro named Mario who helps her to her feet. They flirt for a couple minute, then walk off in the opposite directions. Apparently they plan to meet up, because eventually, after a drawn out conversation between hurt girl and a sun-bathing friend (Camilla), and after a three minute sequence of our boy Mario driving a boat toward a rocky looking island (for real, we see him at the control of a little motor boat for three full minutes), the three meet up for some nice sun-bathing on the sharp rocks of their chosen “beach.”

To make what shouldn’t be a long story but is short, Mario goes deep sea diving (without an oxygen tank), another sequence that is stretched out forever, and finally finds a crate which contains the same knife from the intro. He cuts himself on accident and transforms into a demon. His transformation reminds us how low, exactly, the budget must have been for this movie. Meanwhile, hurt girl (I don’t know what her character’s name is) has a sex dream about Mario, then wakes up scared and goes back to sleep. Another five or so minutes filled.

Mario ends up killing Camilla, maybe because she is walking around the rocky ruins of a castle and taking forever to do so. It is now that we see the demon Mario has become, a demon that resembles that of the one resurrected in Jochen Stephan’s Blutnacht 2, meaning a bad mask and a dab or two of makeup. Then he lies in wait for hurt girl. Blah blah blah, long drawn out scene after long drawn out scene, the end.

I would be more than happy to give another couple of Andreas Bethmann’s movies a watch. I’m always more than ready to give independent filmmakers the benefit of the doubt when it comes to bad acting, bad effects, bad whatever. But honestly, this movie, Die Insel der Damonen, pretty much has bad everything.

There are a total of four actors throughout the film (the fourth shows up near the end for a long, drawn out scene of jogging and slow-motion shadow boxing), and each of them could use some practice. The effects are mediocre, all very obvious and very amateurish. The story is horrible. There’s a knife that cut off a head long ago, and if it cuts you, you become a demon. If, as a demon, you hurt someone, they become a demon. The end.  So, if you’re looking for horror, and you’re insisting it be German, might I direct you to the Andreas Schnaas or Jorg Buttgereit or even Olaf Ittenbach section? 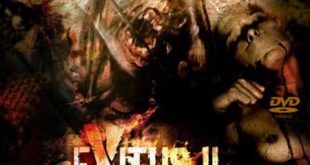 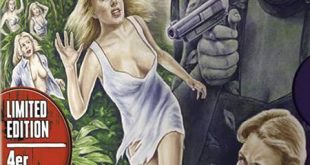 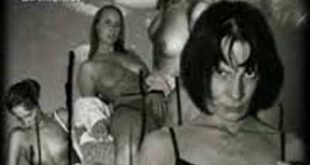 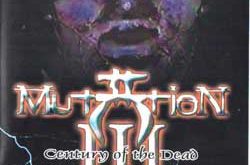