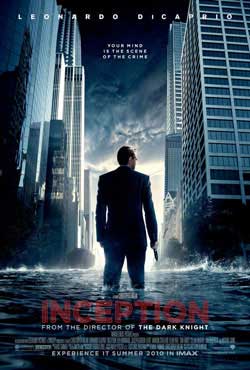 In a world where technology exists to enter the human mind through dream invasion, a single idea within one’s mind can be the most dangerous weapon or the most valuable asset.

All righty now acolytes ..listen up! Before I get to my impressions of “Inception” I wanna tell you a little story that fits into the what I’m going to say later on in this review. Way back in 68′ – 69′ (I don’t remember exactly which year it was) I was taken to see a movie called “2001, A Space Odyssey”. Now mind you I was but a Saint in training at that point & my heart was not nearly as Black as it is now. But I was a really intelligent little guy & my Science teacher at the time (Mr. Kest) thought that it would be a good idea to take me to see “2001, A Space Odyssey”. He thought that being as intelligent as I was I might get it. Now before you start drawing to conclusions that just ain’t so, Mr. Kest was no perv. There were no hands rubbin’ on my knees in the darkness of the Bijou. He was actually a very hip guy who believed I might get something from watching that f*cking movie… 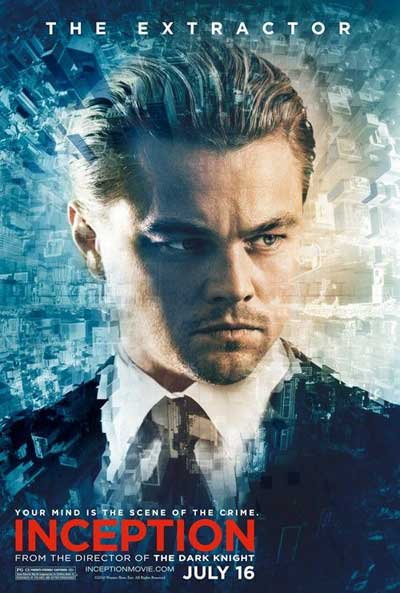 That was 4 decades ago & to this day I still don’t really know what “2001..” is about. I still watch it 2-3 times a year (Honestly) & I’ve read reams of material from people who know exactly what it’s about. Of course they all have different conclusions. Why wouldn’t they? I don’t think Kubrick really knew what it was about while he directed it. As a matter of fact somebody mentions that very same point on the Blu-Ray of the film. Films like these “2001”, “Vanishing Point”, “Renaldo & Clara”, “El Topo”, etc..are what I like to call “Mind Fuck” movies. Movies that start out either relatively straight & then devolve into something else altogether or ones that just start out all f*cked up & f*ck your head up more & more as you sit & try to decipher them. “Inception” might just be the best(worst) mind f*ck movie of all time.

The synopsis sounds simple enough: The time has come where the technology exists to enter the human mind through invasion of one’s dreams. Ideas in certain people’s dreams can become extremely dangerous or very profitable, depending of course on whose mind is being invaded & why. Sounds very straightforward right? It was in 1984 when Director Joseph Ruben created a film called “Dreamscape” which had basically the same plot. Except those who could go into people’s dreams did so to help them with their sleep disorders until one of them goes rogue & is sent into the dreams of the President to kill him in his sleep. But in “Dreamscape” you could turn into some pretty cool (for the time) monsters & do some real damage. None of that in “Inception” though.. 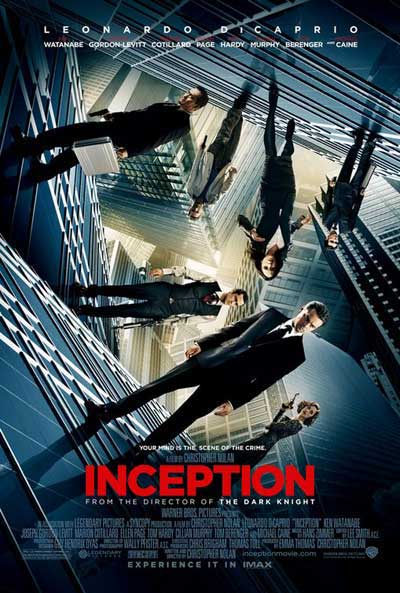 It’s impossible for me to really tell you what this f*cking movie is about. I was dizzy after 20 minutes, but I’ll give it a shot. Leonardo DiCaprio (Titanic) plays Cobb, someone who invades dreams for a living. He has a team of “Dream Invaders” consisting of Joseph Gordon-Levitt (Brick), Ellen Page (Juno), Tom Hardy (RocknRolla), Lucas Haas (Boys) & Dileep Rao (Drag Me To Hell) who all perform different functions whilst invading dreams. Sorta like “Mission Impossible” where each agent had a specialty.

Now here’s where it gets confusing for me. Dicaprio’s team has just blew a mission but an opportunity comes up for one more Dream invasion that Leo believes will get him right with his In-Laws & give him a chance to see his 2 kids again. Why can’t he see his kids? Because their mother is dead & it’s believed that he killed her. How does going into someone else’s dream for profit cure this situation? I don’t f*cking know. You see, this is the problem with “Mind Fuck” movies like this. The screenwriters think they’re smarter than we are so they throw everything & the kitchen sink into these scripts & pretend that we’re gonna get it when in fact I don’t think they even get it while they’re writing it. Now “Inception” was written & directed by Christopher “Director of the Dark Knight” Nolan as if that makes a f*cking difference. I’ve actually seen all of Nolan’s movies & liked every single one of them but every f*cking rose has it’s thorn & Nolan just pricked his finger with this stupid f*cking movie. 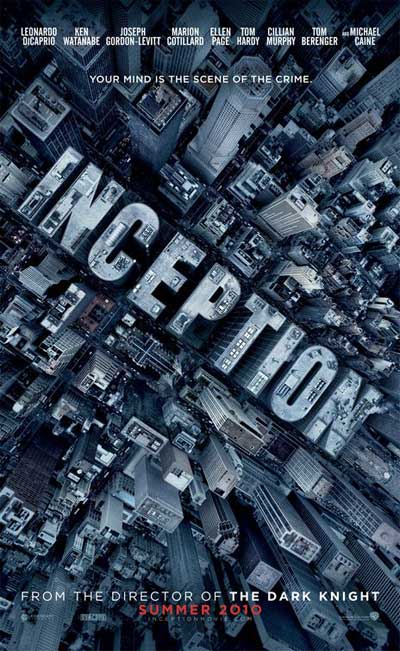 I really can’t tell you much more than that because I didn’t know what the f*ck was going on. There is a plan to insert themselves into “A dream within a dream within a dream” to get the combination to a safe that Ken Watanabe (The Last Samurai) believes has something in it that will save his business. That much I got…I think. But f*ck me sideways people from then on it just gets maddening. To make matters worse I couldn’t decipher most of what Watanabe was saying because of his accent & the fact that he seems to be muttering most of his lines. As a matter of fact there’s a lot of muttering going on in this f*cker which just adds to the confusion. I think the actors were muttering because they didn’t know what the f*ck was going on either. Ellen Page was the only character whose lines I understood completely. And I’m not even going to get into what Marion Cotillard who plays Leo’s dead wife is saying. She not only mutters but she’s also got the thickest accent of anyone in the movie so her lines are totally incomprehensible. And she’s f*cking dead ain’t she? So why is she even in the f*cking movie? I don’t know!

But what does it matter if I still don’t know what the f*ck she’s talking about? You know, critics are falling over themselves praising this movie & I think they’re all full of sh*t. I defy any one of them to give me a satisfactory explanation of what’s going on in this f*cker. As a matter of fact I defy them to translate some of the muttered lines in this movie. I’m sure they can’t. But this is the great Christopher Nolan!! Anything he puts to film must be a masterpiece…right? Fuck no! This movie is a muddled mess that’s nearly 3 hours long & to top it all off ends on a “is it or isn’t it” theme. WHY?? Fuck Chris Nolan, I don’t think he knew what was going on half the time & he wrote this cinematic piece of sh*t. 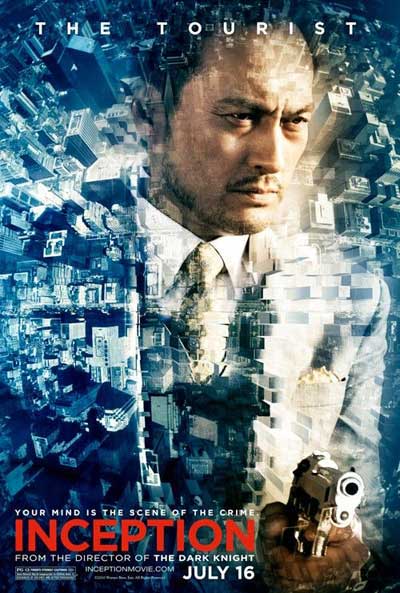 I will say that it looks great though & the effects are wonderful. Entire landscapes fold before your eyes & there’s a whole lot of M.C. Escher staircases to run around on. They even end up on a snow covered mountain in camouflage battling troops that are protecting the safe. Again I ask…WHY?? It’s straight out of “On Her Majesty’s Secret Service”. The one James Bond film that starred George Lazenby way back when. I will say that there is a fight sequence in a hallway with Levitt fighting off a bunch of goons while the entire world he’s in is spinning around which meant that they were spinning around as well. It’s the best part of the film. Sort of like “The Matrix” on steroids. It must’ve been hell choreographing those scenes & Levitt deserves praise for pulling it off wonderfully.

So where are we right now? I don’t f*cking know! All I can tell you was that The Black Saint was in a tizzy throughout most of this film. I consider myself a very intelligent Saint & I usually can get through a movie like this with an idea of what was going on but not this time. Sad to say but I just didn’t get it. I almost felt physically ill at one point when sh*t started spinning around & people are falling in slow motion in the rain & so on. Damn, I hated this movie. 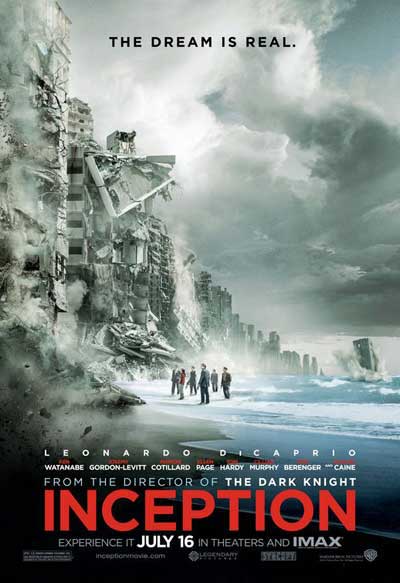 I’m not going to tell you not to go see it, according to the weekends grosses a lot of people did. I’ll bet that 95% didn’t know what the f*ck was happening & the other 5% fell asleep. Don’t buy into the hype people. There might be a good movie somewhere deep inside “Inception”..Maybe it’s in one of Nolan’s dreams somewhere in a safe that only he has the combination to, or maybe he was just making it up as he went along but I will say that if you go see this cinematic abortion, go in with an open mind cuz’ your head’s going to be spinning after about 30 minutes or so & it only gets worse from then on. 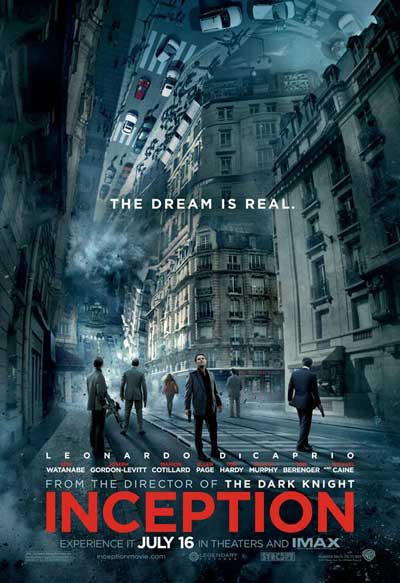 The Black Saint is giving “Inception” one Shroud & that’s mainly for the visuals. There was nothing particularly bad about the acting but I can’t rate what I don’t understand. As for me..I’m going back into my Mausoleum & try to regain my balance & the part of my brain that this f*cking movie killed off…might take awhile. So until then children, eat your breakfast every morning, Wash your hands & face before every meal, & of course pray before every meal you eat & before you go to sleep as well. And who is it that you’re all praying to? If I have to keep repeating this I might just pay you a midnight visit & trust me, once I get my equilibrium that this f*cking movie stole from me back you won’t want to meet me…but just in case you’re a new reader who doesn’t know yet. PRAY TO ME!!!!