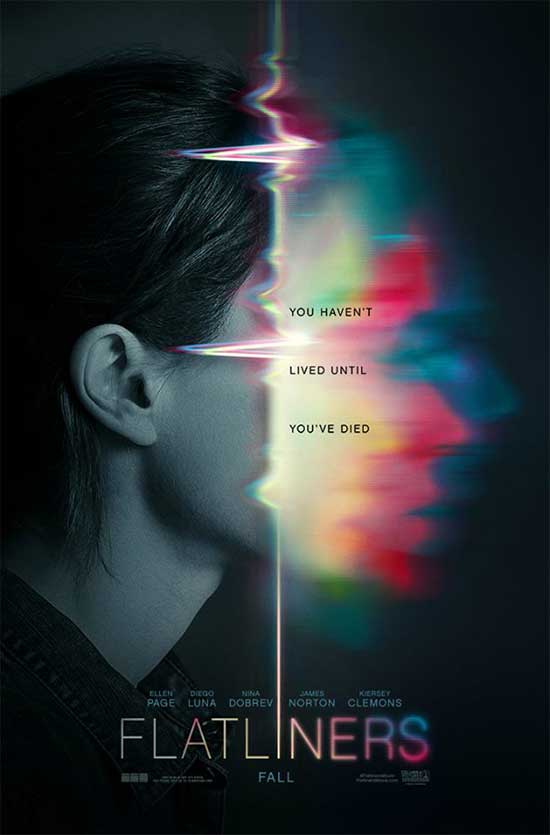 Five medical students, obsessed by what lies beyond the confines of life, embark on a daring experiment: by stopping their hearts for short periods, each triggers a near-death experience – giving them a firsthand account of the afterlife.

Sony Pictures, sigh.  I have zero faith in Sony Pictures.  More than half of what it peddles out is unwatchable, a truly miraculous feat when one considers the budgets of some of these films.  Sony’s been on a sling-crap-against-the-wall-and-see-what-sticks campaign for a while but unfortunately that wall is almost spotless.

Things are even worse, if you can believe it, when Sony tries to reboot its own intellectual properties.  Original scripts used to the be the norm in the industry, but today, in an age when there’s a damn parade every time a major studio develops an original screenplay because it’s so rare, your reboot/remake game needs to be on point…that and/or your superhero game.  Sony seems to be playing the crap-slinging game with both and, at least recently, that wall is so clean you could eat off it…if you could eat off a vertical surface.  Maybe you could in space if you…never mind.  You get the point.

But we’re not here to talk about those masterpieces of modern cinema, it’s Flatliners (2017) we are worried about.  I was intrigued after seeing the trailer in the movie theater; it looked like it had potential.  I even watched the original Flatliners (1990) in anticipation, and then immediately remembered that the original is one of those movies that’s like an old relationship: you only remember what was good about it, when in reality it really wasn’t what you hoped for.

The movie opens with Ellen Page [Hard Candy (2005), The Cured (2017)] driving with a young girl, but you can feel that tragedy is about to strike.  They crash and the young girl, her sister, ends up dying. Nine years later, now with an interest in what happens after death, Courtney (Page) is a medical student who recruits two other students, Sophia and Jamie, to help her stop her own heart for one minute and then resuscitate her to investigate the afterlife.

Luckily for these medical students, there just happens to be a brand new fully functioning but deserted hospital in the basement of the hospital that they all work in.  That’s right, a hospital is stacked on top of an empty hospital, conveniently supplying these students with a vacant and isolated location with the thousands of dollars-worth of equipment they need to pull this off, what are the chances!

Not surprisingly, Sophia and Jamie have trouble bringing Courtney back to life while Courtney has an outer body experience.  Adding to their ineptitude is that fact that a lot of the equipment needed to resuscitate Courtney isn’t set up.  They are still connecting tubes and hoses as their friend lays on a slab lifeless.  Your friend’s life is on the line, wouldn’t you verify that everything you might need is affixed and ready to go?  I sure would.  But not these med students, so Diego Luna [Rogue One (2016)] has to come save the day.  Cassian Andor and his hair, in all its flowing glory, runs down and brings Courtney back to life.

The young cast did a fantastic job during the medical scenes; they really acted their asses off.  The audience can feel the urgency and gravity of the situation when trying to bring a person back to life, so hats off to them, but much of the rest of the dialog felt like the hallow banter of a teen movie.  This is unfortunate considering the heavy and meaningful topics addressed throughout the film, mainly death, the afterlife, self-worth, forgiveness, soul-searching and self-scrutiny.  It seems like a missed opportunity.

Courtney not only feels a sort of “high” from “flatlining,” she’s now more intelligent, evidenced by her answering difficult questions correctly in class from her professor (Kiefer Sutherland, who was the lead in the original film), she is more athletic, evidenced by the audience being told she ran 12 miles that day in this same 45 second scene, and she got a jolt to her culinary abilities, evidenced by her baking six loaves of bread.  (I’m not kidding).

Now everyone wants to flatline, obviously because they all want to perfect that pumpernickel bread recipe, except for Diego Luna’s character who is on Atkin’s…and because he thinks it’s unsafe.  Jamie, the rich womanizer, flatlines next and he also receives a jump his abilities.  Marlo, Luna’s love interest, flatlines after Jamie however she stays under too long resulting in her experience starting to turn bad for her.  Immediately after her turn, Sophia, who is controlled by her mother, wants to go in an act of defiance and for the academic edge.

But there’s trouble.  There’s always trouble.  While Sophia is under, someone actually comes down to the brand new fully functioning super-secret basement hospital and before Sophia is completely conscious, they all have to run to their car while being chased by security and drive away, smashing through gates in the process.

So, what do they do then?  They don’t go home and lay low; they go to a massive party.  The unauthorized use of tens of thousands of dollars of school/hospital property.  Almost guaranteed to be on security camera.  Security guards have seen you, your faces and your car, a red Mini Cooper, which is not only impossible to miss, it’s probably registered with the school.  What should we do?  Just party and go to school and the hospital the next day like nothing happened, I guess.  Right?

But the night of the party, Sophia, in another act of defiance of her mother combined with the flatlining high, has loud intercourse with Jamie while her mother knocks on her bedroom door.  When they’re done knockin’ boots, Jamie opens the door and introduces himself to Sophia’s mother.  The whole scene was most likely supposed to be comical, but it mostly came off as cringy, partly because James Norton (best known for British TV) who plays Jamie just didn’t come off as a suave playboy at really any point in the movie.

The movie then switches into basically a teen horror movie with all the usual horror clichés, including but not limited to: blurry movement in the dark, a possible person moving in negative space, all the drawers and cupboard doors opening at the same time, and it goes on from there.  Like the original, each of the four flatliners have a lingering sin from their past coming back to haunt them which they all have to face, but I won’t ruin everything for you.

The movie ends with an obnoxiously happy ending, wrapping everything up way too neatly, robbing the audience of any of the terror built up over the last 45 minutes.  It wraps up so neatly, in fact, that it reminded me of a 90’s sitcom.  I thought Joey Gladstone might pop out and go “cut, it, out” with the hand motions.  And that brings me to my next point.

Sony played it too safe with the tone and the changes they made in an effort to keep the movie PG-13 when it would’ve been much more effective as rated R.  Because the original came out 30 years ago, anyone who would remember it would obviously be an adult now.  But Sony most likely wanted to target a wider, younger audience, which prevented the film from addressing anything really meaningful despite the film’s heavy themes, leaving us with a commercialized version lacking any depth.

One of the changes the film makers made was to the major sin that haunted Marlo.  In the original, one of the characters, played by Julia Roberts, felt guilt about her father’s suicide her whole life which is lifted when she learns through flatlining that he was addicted to heroin.  This was most likely changed for the PG-13 rating, which could’ve brought a deeper more profound element to movie.  This is just one of a few examples which we don’t have time to discuss here, this is already way too long.

The film also failed to say anything substantial regarding its main topics of death, the afterlife, self-reflection, and forgiveness which, like the film itself, was definitely a missed opportunity.

The film was disappointing but not terrible, and at the same time exactly what you think it is: the complete commercialization by a major production company of a darker more meaningful film, with cheap cliché scares completely missing the opportunity to do and say something significant in order to appeal to larger younger audience.