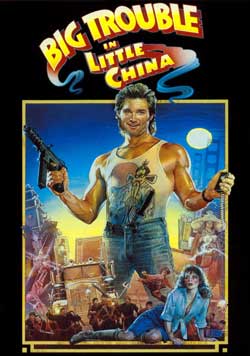 An All-American trucker gets dragged into a centuries-old mystical battle in Chinatown.

“This is Jack Burton in the Pork Chop Express, and I’m talkin’ to whoever’s listenin’ out there.”

Sandwiched between the sweet science fiction of Starman and the dark, quantum horror of Prince of Darkness, Carpenter’s 1986 film presents a happy medium blending more genres than most filmmakers cover in their entire careers. Poorly received by critics at the time of its release for its subversion of the American protagonist and capacious assault on the senses, the film is one of the most well-regarded cult films in recent cinema history. At the box office, the film performed poorly as well, having not been marketed with its satire intact. It also served vital in Carpenter’s transition from Hollywood films to independent features. 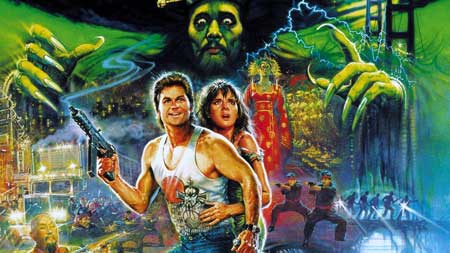 The aforementioned quasi-protagonist is Jack Burton (played by Kurt Russell in John Wayne mode), an overconfident loudmouth who drives a truck emblazoned with the name Pork Chop Express. He is visiting his friend, Wang Chi (Dennis Dun), the real protagonist of the film. At the start of the film Burton challenges Wang that he can’t cut a sake bottle in half with a butcher knife.

Wang makes an attempt and the bottle hurtles towards Burton’s face, he catches it and uneasily replies, “It’s all in the reflexes.” Once again, the American reality: an approach ill-conceived and reactionary. It is an approach that often fails Burton throughout the film (it is a clever setup for the ending that it doesn’t fail him in this instance) and yet, Burton is nonetheless full of wisecracks, “Just remember what ol’ Jack Burton does when the earth quakes, and the poison arrows fall from the sky, and the pillars of Heaven shake. Yeah, Jack Burton just looks that big ol’ storm right square in the eye and he says, ‘Give me your best shot, pal. I can take it,’” and insight, “Well, ya see, I’m not saying that I’ve been everywhere and I’ve done everything, but I do know it’s a pretty amazing planet we live on here, and a man would have to be some kind of fool to think we’re alone in this universe.” It is this understanding of the Burton character that makes the film’s prologue (demanded by the studio at the time to “elevate” Burton’s role) such an ironic, yet half-true, exposé.

So after that portentous scene, Burton and Chi visit an airport to pick up the latter’s fiancé but she is kidnapped by a gang called the Lords of Death, overseen by Lo Pan (James Hong), a 2000-year old man who is attempting to lift a curse (one of an ethereal existence) set upon him by sacrificing a woman with green eyes to a deity. From one misadventure to another, Burton and Chi track him down, with Chi proving to be a much more indispensable than Burton who somehow manages to incapacitate himself at the beginning of every fight. Among their assemblage is lawyer, Gracie Law (Kim Cattrall), who also bears green eyes and banters back and forth with Burton for most of the film. 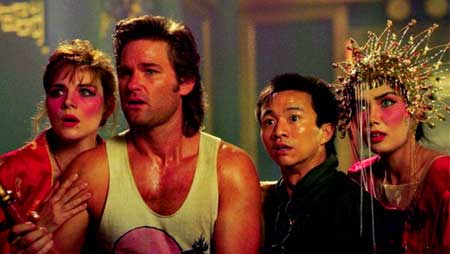 Eventually, she is also kidnapped because of her green eyes. There is Egg Shen, tour bus driver by day, resourceful mystic of Chinese black magic by night (or whenever the need arises really). He and his Six Demon Bag prove formidable against his arch-nemesis, Lo Pan and his minions.

Russell’s performance is the perfect balance of macho arrogance and endearing incompetence – a major problem for critics at the time. It was a counter to the typical American conceit that the star must do everything right and do it with swagger (well, the swagger was retained in this film). Burton does everything wrong and is always outmatched, yet he is never discouraged which is perhaps why the film ends the way it does: with Burton obliviously rambling into his radio as a hairy demon creeps behind him. Is this his/America’s comeuppance for the prideful view they have of themselves and the vague, belligerent view they have of non-Americans? To digress, it’s a wonderful character and Russell deserves enormous respect for taking on the role.

In the end, it’s a film that is both entertaining and seditious, showcasing Carpenter’s ability to bring a colourful world alive. Chinatown is depicted with a vast assortment of environs: underground passages, ancient temples, seedy brothels, and authentic restaurants. The soundtrack (composed, as it typically was, by the director) conveys that classic Carpenter vibe of inevitable conflict but with a bit more of a rock sensibility (the theme song is, in fact, sung by Carpenter himself). The film is sharply edited (characteristic of the director) and fluidly shot (by frequent Carpenter collaborator, Dean Cundey). While The Thing may be Carpenter’s masterpiece, this film shows the breadth of his talent in fine form.