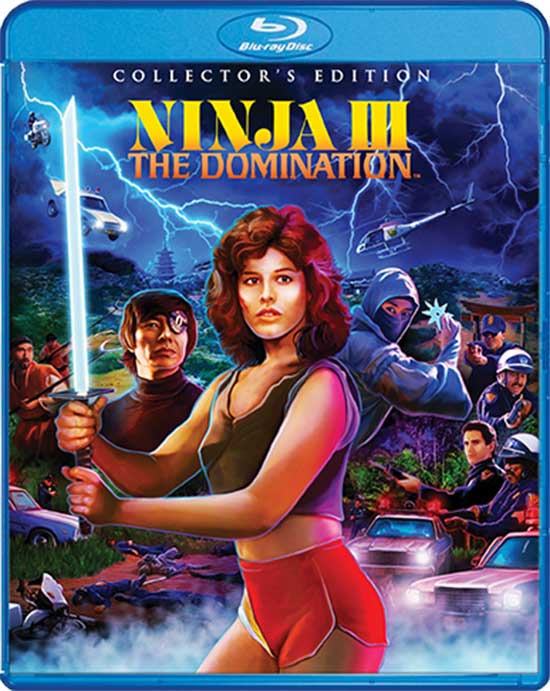 An evil ninja attempts to avenge his death from beyond the grave, by possessing an innocent woman’s body.

For those too young to remember, ninjas were incredibly popular during the 1980s to the point that one could say media was oversaturated with them. They were showing up in comic books, toy lines, television shows, and movies. It felt like you couldn’t turn a corner without seeing someone either dressed up like Don Johnson from Miami Vice, Michael Jackson, Madonna, or see something ninja related. Sometimes all four at the same time. As one might expect, B-grade cinema jumped on the ninja bandwagon faster than someone could say “Michael Dudikoff.” 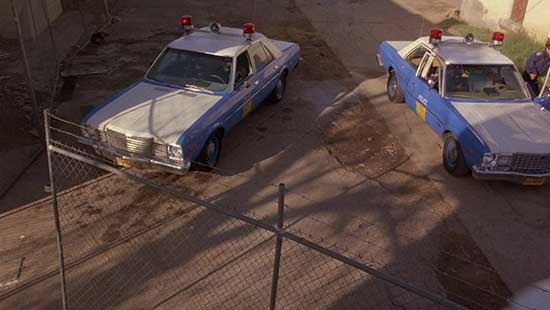 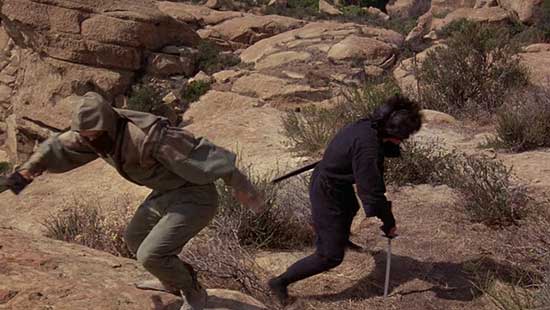 Ninja III: The Domination is the story of Christie, a telephone linewoman and part-time aerobics instructor, who comes across a ninja bleeding to death in the desert. Unaware that said ninja just killed a bunch of people on a golf course and got shot like a bazillion times by the cops before making his get away, she tries to assist dying man. After he first attacks her, but then has a change of heart and gives her his sword. For reasons unknown, she doesn’t hand the sword over to the cops when they arrive on the scene and question her. Christie tries to go back to her life, but finds that things aren’t so simple because the ninja’s spirit has been taking possession of her body to kill the cops that gunned him down. It’s up to a detective that’s she’s dating and a another ninja to try to get the spirit out of her body and defeat it once and for all.

Ninja III is one of those films where it seemed like it was trying to be three different things at once. You have your basic ninja movie filled with martial arts mayhem and ninja trickery. Then you have the storyline of the main character starting a relationship with a cop after he keeps showing up to her aerobics classes in an attempt to win her over (some people might call what he’s doing stalking). Finally, you have the possession by an evil spirit storyline. So, you have ninja movie, a romance movie, and an Exorcist inspired horror movie all melded together in a mishmash of genres that doesn’t quite work. The film feels somewhat disjointed as it tries to balance all of those elements. 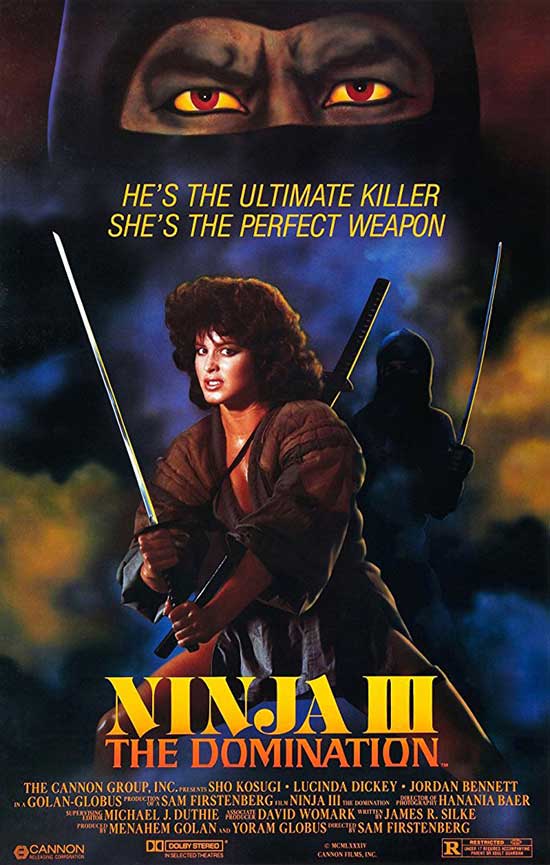 That’s not the least of the problems. The acting for the most part waivers between bad and terrible. The majority of the characters are unbelievably dumb to the point I began to wonder if they’re able to tie their shoes without suffering severe nose bleeds from the mental strain. The romance between the cop and the main character feels forced and unbelievable, particularly when you consider that’s he’s essentially stalking her. He’s not particularly bright, charismatic, or good looking (dude looks like a sasquatch when he takes his shirt off!). Yet somehow we’re supposed to believe that this guy is able to win over someone as pretty as Christie. Ninjas also don’t behave like ninjas in this movie. Don’t get me wrong, but they do all the martial arts pseudo-mystic bull crap one would expect. However, they are operating IN THE MIDDLE OF THE FREAKING DAY! I was always told that ninjas are supposed to be assassins that strike from the shadows and operated during the night when to best use the cover of darkness. Not here. Apparently fighting under the glaring light of the desert sun is how these guys go about their business.

I also dare anyone to not laugh whenever the supernatural aspects show up. When the spirit of the evil ninja starts taking control of Christie’s body, we are subject to some of the hokiest effects. You get to see a katana “floating” in the air, and you can see the string it’s hanging off of. The rest of the “spooky” elements are provided by trick lighting and a fog machine on overdrive. Despite it looking hokie as heck, however, there’s a certain charm to it all. 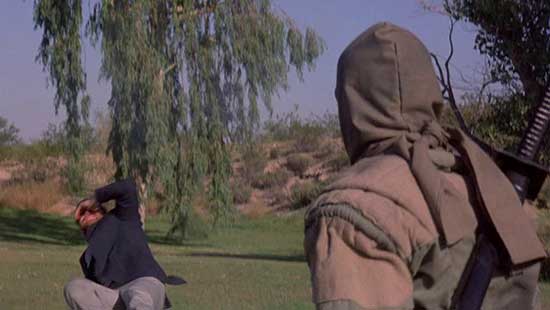 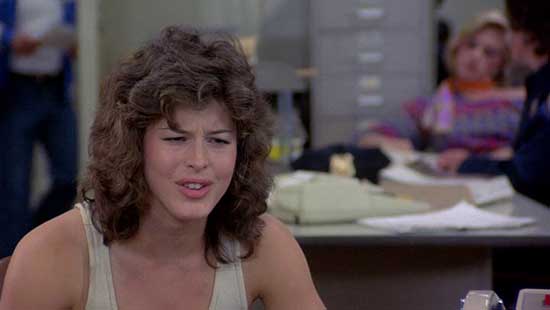 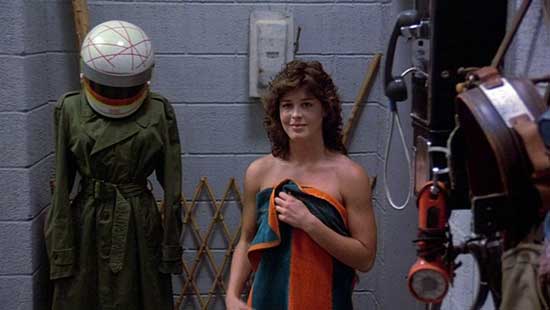 Actress Lucinda Dickey played Christie, and I’m not going to attempt to say that she’s a good actress. However, she wasn’t as terrible as some other members of her cast. To her credit, she did do some of her own stunts and did show a certain aptitude for action despite having only one week of martial arts training. She didn’t get to do all of her own stunts, and some of the more intricate fights required they have someone stand in for her. I think if she trained in martial arts some more after the movie, she could have found a niche in making action flicks.

The best thing about Ninja III was actor Sho Kosugi, who was trained in Ninpo and has starred in several ninja movies over the years. He was not only a fairly decent actor but a gift martial artist. Whenever he showed up, the film improved dramatically. His fight scenes were dynamic, exciting, and just fun to watch all around. Plus his character was so badass that he used a tsuba from a katana as an eyepatch. Practical? No. Awesome? Yes! Kosugi also worked as the movie’s fight choreographer, and his expertise in that field really elevated the action scene. He made such an impact that this film wouldn’t have been as entertaining without him. 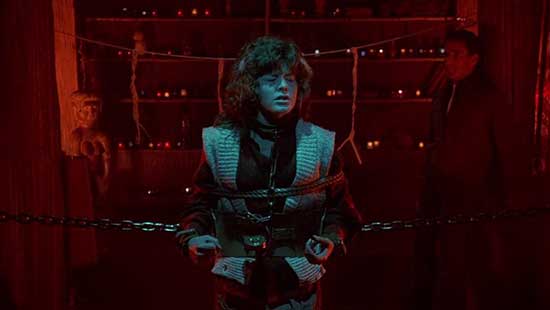 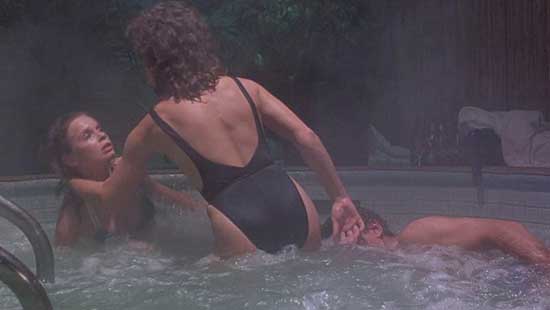 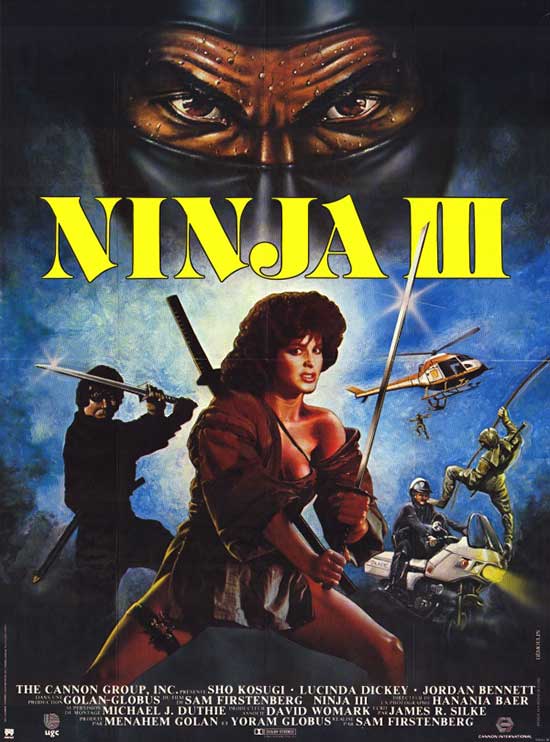 To close, Ninja III is a fairly bad movie that manages to be entertaining and charming enough to overcome its problems. It’s fun, which sometimes all a film needs to be at the end of the day. Check it out!

Ninja III: The Domination (1984) is now available on bluray per Shout Factory