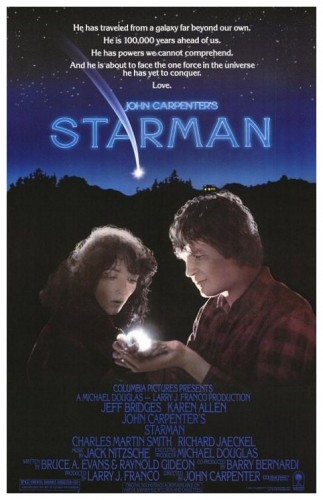 SYNOPSIS:
“Having accepted an invitation to visit Earth (sent in the one of the Voyager space probes in the 1970s) an alien receives a rude reception when his ship is fired upon and disabled. He has only three days to get to the giant crater near Winslow, Arizona where he will be rescued or else he will die. Taking human form, he seeks the assistance of the recently widowed Jenny Hayden. Initially terrified, she comes to care for the alien visitor. All the while, government agents seek to track them down.” (courtesy IMDB)

REVIEW:
Back in the late seventies, Columbia Pictures optioned two science fiction films with similar themes. One was a Michael Douglas production called Starman written by Bruce A. Evans and Raynold Gideon, and the other was a Steven Spielberg project entitled Night Skies. Columbia decided to abandon Night Skies, which was similar in plot to Starman, on the grounds that the former story was geared towards children more suitable to a Disney production, whereas Starman was for more mature audiences. Night Skies was eventually retitled E.T. The Extra-Terrestrial (1982) and became the highest-grossing film of all time, which only goes to show how wrong one can be in the film industry. 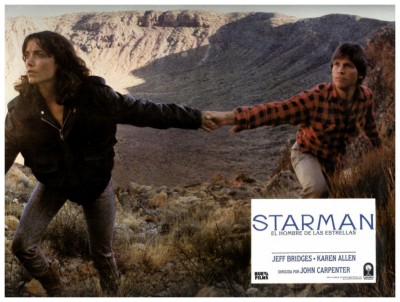 The original director assigned to Starman (1984), Mark Rydell, resigned from the project in 1981 due to artistic differences with Michael Douglas. Then screenwriter Dean Riesner was brought on board, who worked on seven different drafts of the script with two other writers, Edward Zwick and Dane Thomas, and six different directors: Adrian Lyne left to direct Flashdance (1983); John Badham left to direct WarGames (1983); Tony Scott; Peter Hyams; and finally John Carpenter. Whereas Scott was more interested in style than narrative drive, and Hyams wanted a more conventional science fiction approach, Carpenter wanted to emphasise the cross-country rapport that develops between the two leads like It Happened On Night (1934) or The Thirty-Nine Steps (1935) or The Defiant Ones (1958). 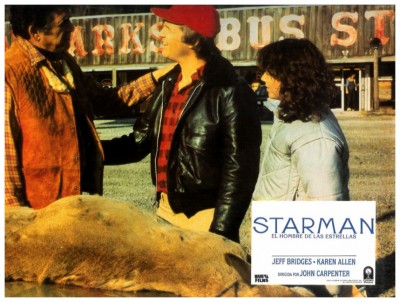 Around the same time, Carpenter was also acting as the executive producer on The Philadelphia Experiment (1984), about a man from the past who gets help from a modern-day woman in his attempt to elude authorities. Very soon after, Carpenter followed through with this other couple-on-the-run science fiction film. It’s a big improvement because Carpenter directed (he wasn’t directly involved with the making of the earlier film) and it contains much more sympathetic characters, but the story itself is still familiar and predictable. Much like Steven Spielberg‘s Close Encounters Of The Third Kind (1977) and E.T. The Extra-Terrestrial (1982), Starman presents a scenario where the middle-class of America is touched by a celestial being.

The story begins back in 1977 when NASA launches the Voyager II probe containing a greetings from planet Earth and an open invitation to visit any time. Journeying through outer space, the probe enters an unknown planet (or dimension, it’s not exactly made clear) where the inhabitants discover the message and decide to take up our invitation. A reconnaissance spaceship is dispatched to Earth, but is shot down by the United States military, crashing down in upper Wisconsin. A ghostly orb exits the scene of the crash and enters the home of the recently widowed Jenny Hayden (Karen Allen). Using DNA from hair found in a scrapbook, the alien entity takes the form of Jenny’s deceased husband Scott Hayden (Jeff Bridges). Kidnapped at gunpoint, Jenny is forced by this duplicate of her husband to drive him to his preordained destination in Arizona. 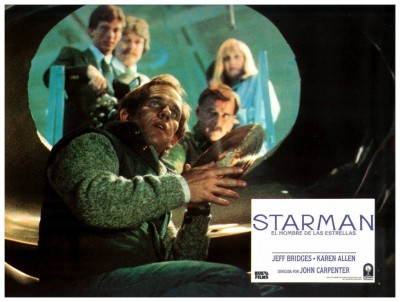 Meanwhile, hot on the trail of this ultimate illegal alien is merciless military man George Fox (Richard Jaekel) and empathetic S.E.T.I. (Search for Extra-Terrestrial Intelligence) researcher Mark Shermin (Charles Martin Smith). Over the three-day journey, the alien visitor is privy to the American way of life through truck-stops, gas stations and motels, where ordinary Americans seem more than willing to lend a helping hand. Jeff Bridges is most appealing as the gentle alien, and is most convincing and amusing as he picks up human characteristics. Highlights include learning local vernacular (“Take it easy! Up yours!”), how to drive (“Red light stop, green light go, yellow light go very very fast!”), learning how to kiss by watching From Here To Eternity (1953), an altercation with a group of deer hunters after the alien brings their kill back to life, and a Las Vegas detour where he manipulated the slot machines to accommodate their penniless plight. As they elude the police and government officials, they eventually fall in love. 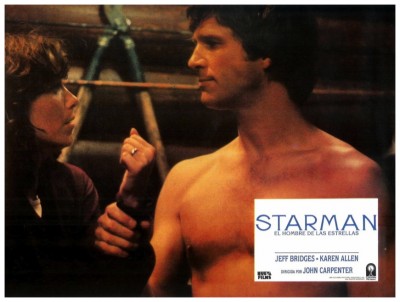 This becomes still another early eighties film in which women decide to have the babies of men whom they’ll never see again, from The World According To Garp (1982) to The Terminator (1984). Before the eighties, a decision by an unwed character to have a child was considered idealistic, even rebellious, but in the era of Ronald Reagan such a decision is a conservative one, usually tantamount to anti-abortion statement. At least in The Terminator, unwed Linda Hamilton chooses to have a baby as much for political reasons (he will grow up to be a military leader) as for her love of the father. Also troublesome is the alien’s conclusion that human beings are at their best when things are at their worst. This is not only trite but makes no sense, considering that when the alien says it, he hasn’t yet seen any evidence of this. 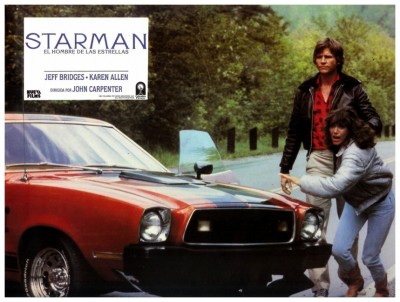 Yet, despite my reservations about its themes, this film is the first indication that Carpenter actually cares about the characters he helps to create and obviously wants the best for them, which is apparent in all the truly sweet scenes between Jeff Bridges and the underrated Karen Allen, who shows here that she is more comfortable than any other contemporary actress at playing love scenes. Bridges was nominated for both the Golden Globe and Oscar for Best Actor that year, making Starman the only Carpenter film ever to receive an Academy Award nomination. The film itself was nominated for the Saturn Awards Best Science Fiction Film, and composer Jack Nitzsche received a Golden Globe nomination for his score but, despite all his diligence and hard work, screenwriter Dean Riesner didn’t even receive a screen credit, because the Writers Guild strangely decided that he contributed less than fifty percent of the finished screenplay. 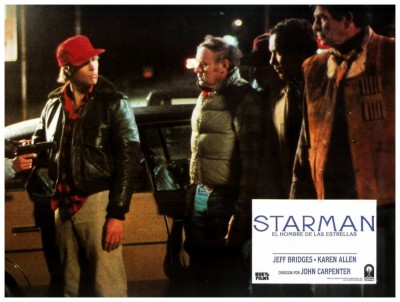 Although Starman barely made its US$22 million budget back, the powers-that-be at ABC decided it worthy enough to green-light an ongoing television series to be produced by Michael Douglas starring Robert Hays as the returned alien in the body of photojournalist Paul Forrester, to spend time with his now-teenaged son Scott Hayden Junior (Christopher Daniel Barnes) as they try to find Scott’s missing mother Jenny (Erin Gray) and avoid government UFO investigator George Fox (Michael Cavanaugh). Fox refuses to tolerate Starman and Scott running free in society, however Starman holds no malice toward Fox, and even treats a life-threatening injury before he and Scott make their escape. Unfortunately, the series bore far too many similarities to other man-on-the-run television shows such as The Fugitive starring David Janssen and The Incredible Hulk starring Bill Bixby and, after only twenty-two episodes, was cancelled despite having a minor cult following.

John Carpenter, on the other hand, had arguably reached his peak as a filmmaker, and produced Starman as a way to prove to Hollywood once and for all that he could make a family-friendly film and bring it in on-schedule and under budget, after the production problems that plagued his real masterpiece, The Thing (1982). Following the box-office failure of his misunderstood action-comedy Big Trouble In Little China (1986), Carpenter struggled to find finance. He returned to making smaller budgeted films such as Prince Of Darkness (1987) and, although films like They Live (1988) picked up small cult followings, he never again realised his mass-market potential. His career during the nineties is characterised by a number of notable misfires like Memoirs Of An Invisible Man (1992), In The Mouth Of Madness (1994), Village Of The Damned (1995), Escape From L.A. (1996) and Vampires (1998). On this rather sad note I’ll politely request your company next week when I have the opportunity to give you a swift kick in the good-taste unit with another terror-filled excursion to the backside of Hollywood for…Horror News! Toodles! 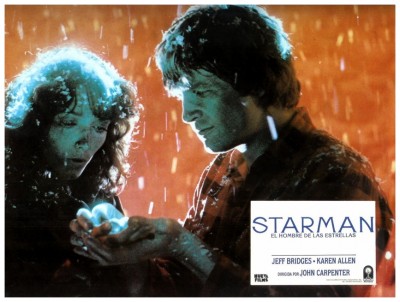