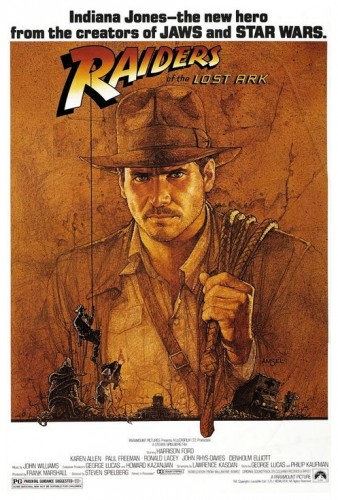 SYNOPSIS:
“The year is 1936. Archeology professor Indiana Jones narrowly escapes death in a South American temple with a gold idol – by poison dart, fall, and finally a giant boulder that chases him out the front. An old enemy, Rene Belloq, steals the idol and then orders Hovito Indians after Indy. Indy, however, escapes back to the USA, where Army Intelligence officers are waiting for him at his university. They tell him about a flurry of Nazi archaeological activity near Cairo, which Indy determines to be the possible resting place of the Ark of the Covenant – the chest that carried the Ten Commandments. The Ark is believed to carry an incredibly powerful energy that must not fall into Nazi hands. Indiana is immediately sent overseas, stopping in Nepal to pick up an old girlfriend (his old professor’s daughter) and then meeting up in Cairo with his friend Sallah. But danger lurks everywhere in the form of Nazi thugs, and poisonous snakes in the Ark’s resting place. After Belloq, hired by the Nazis, makes off again with the Ark, Indy and Marion are determined to get it back, and they overpower the pilot of a German plane. But Indy finds himself confronted with a giant German thug, and after a frightening hand-to-hand fight Indy and Marion blow up the plane. Now the Nazis must drive the Ark to Cairo, but Indy regains control of the Ark after running the convoy off the road, one vehicle at a time. Once again the Nazis recapture the Ark and Marion, heading for a Nazi-controlled island. There, Belloq will open the Ark, to demonstrate the horrific power it can unleash upon the world!” (courtesy IMDB)

REVIEW:
Produced by George Lucas, directed by Steven Spielberg, based on a story by Lucas and Philip Kaufman, and scripted by Lawrence Kasdan, Raiders Of The Lost Ark (1981) stands as one of the best swashbuckling adventure movies ever made. The interesting thing about the film (apart from its intrinsic merits) is that the filmmakers seem to have taken it on almost for fun, as a kind of therapy after more elaborate productions. One can easily imagine Lucas, Spielberg and Kasdan hysterically tossing ideas into the pot, and this is what they came up with – a dazzling and genuine partnership. Planned as a kind of B-grade movie in memory of the great serials of the past, it wound up being comparatively expensive at US$18 million (together with films like Star Wars IV A New Hope (1977) and Alien (1979) before it, Raiders Of The Lost Ark helped initiate the ‘B-movies with A-budgets’ movement still evidenced in Hollywood today). 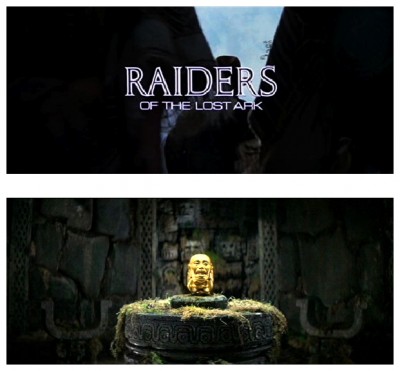 The result is an informed, brilliantly executed tribute to the sort of ultra-exciting movies we all remember from our childhoods, but which oddly seem less impressive when revisited in the cold light of adulthood. The trick here is that the filmmakers have taken all the ‘good’ bits and sewn them together in a cavalcade of excitement. The hero is established within the first few minutes: Handsome know-it-all maverick archeologist Indiana Jones (Harrison Ford) is capable of tracking down and retrieving ancient Andean treasures, as well as escaping ingenious traps and hostile local tribes to within an inch of his life. His preferred weapon is a whip. Shortly after returning to Marshall College where he teaches archaeology, Jones is interviewed by two government agents who inform him that the Nazis, in their quest for supernatural power, are searching for his old mentor Abner Ravenwood, who is the leading expert on the ancient Egyptian city of Tanis and possesses the headpiece of the Staff of Ra. 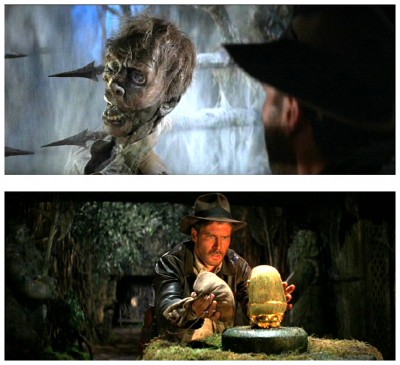 Tanis is believed to be the location of the Ark of the Covenant, which the Nazis believe will make their armies invincible, and the Staff of Ra is the key to finding the secret chamber in which the Ark is buried. The agents want Jones to recover the Ark before the Nazis, so he travels to Nepal to discover that Ravenwood has died and that the headpiece is in the possession of his daughter Marion (Karen Allen), Jones’ embittered ex-girlfriend. Marion’s Tibetan tavern is suddenly raided by a group of thugs commanded by a Nazi agent named Toht (Ronald Lacey). The tavern is razed in the ensuing fight, and Toht burns his hand on the searing hot headpiece when he tries to grab it. Jones and Marion escape with the headpiece and travel to Egypt, where they learn from Jones’ old friend Sallah (John Rhys-Davies) that rival archeologist Belloq (Paul Freeman) and the Nazis are digging for the Well of Souls with a replica of the headpiece modeled after the scar on Toht’s hand. 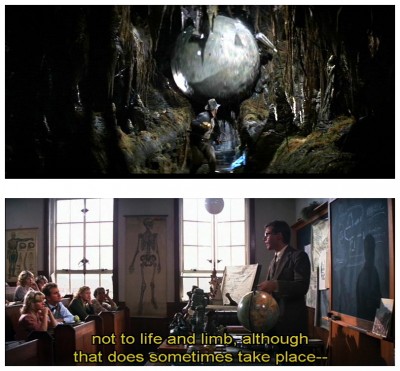 While walking through a marketplace, Nazi operatives kidnap Marion and Jones believes she’s died in an explosion. As he deciphers the markings on the headpiece, Jones realises that the Nazis have miscalculated the location of the Well of Souls. Using this to his advantage, he infiltrates the Nazi camp and uses the Staff of Ra to uncover the Well of Souls, which just happens to be filled with snakes. Despite his intense fear of the reptiles, Jones fends off the snakes and acquires the Ark, but Belloq and the Nazis arrive to take it from him and toss Marion into the well with Jones. They manage to escape, fight a musclebound Nazi mechanic, blow up an experimental flying wing aircraft and chase down a convoy of trucks, one of which contains the Ark. Jones and Marion manage to recapture the Ark and jump on a tramp steamer headed for England with their prize. Unfortunately, their boat is soon boarded by Belloq and the Nazis, who once again steal the Ark and kidnap Marion. 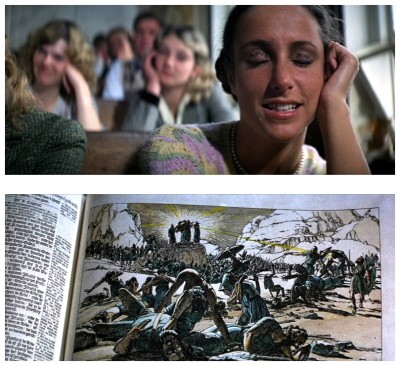 Jones stows away on their U-boat and follows them to an isolated island in the Aegean Sea, where Belloq plans to test the power of the Ark before presenting it to Hitler. Jones threatens to destroy the Ark with a bazooka, but Belloq calls his bluff, knowing Jones cannot bear to destroy such an important historical artifact. Jones surrenders and is tied to a post with Marion as Belloq performs a ceremonial opening of the Ark, which seems to contain nothing but sand. Aware of the supernatural danger of opening the Ark, Jones tells Marion to keep her eyes shut. Beautiful wraith-like spirits suddenly emerge from the Ark, which soon turn into horrifying angels of death and destroy Belloq and his Nazi friends – heads explode and faces melt. Returning to Washington, the government agents who recruited Jones tell him that the Ark has been taken somewhere safe to be studied by top scientists. Jones wins a hollow triumph, and the Ark is crated up to be stored forever in a gigantic warehouse among thousands of similar crates. 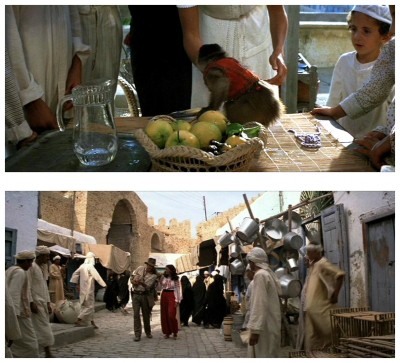 Taking a page out of Erich Von Däniken‘s book, Lucas envisaged the Ark of the Covenant as the repository of occult (maybe even alien) electrical power, although the climactic scene in which these powers messily dissolve a slew of Nazis is not the best part of the film. Television actor Tom Selleck was originally cast in the lead but dropped out at the last minute, forcing the filmmakers to find someone to fill the role fast. Fortunately, Harrison Ford is supremely well cast as the unshaven tough-guy hero, quick-thinking and unscrupulous, but his part would not have worked so well without Karen Allen, whose spunky heroine precisely balances it. Ford’s intense dislike of snakes only added to the tension of the snake-pit scene (protected by a pane of glass in which the reflection of the snake could be seen, one of several pre-digital flubs later repaired by computer generated imagery for its DVD release). 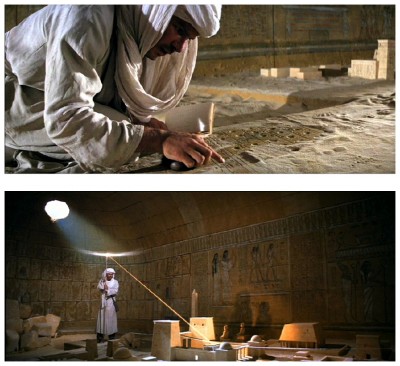 Placing Indiana in dangerous predicaments regularly throughout the film keeps the tension high, and exotic sets and archaic mysterious settings became hallmarks of the Indiana Jones cycle. The film is an abject lesson in pacing and editing, piling incident upon incident with superb precision so that the audience would positively gasps at the snowball effect, which continues just long enough to go beyond excitement into wit. The film works so well because it goes very close to being over-the-top but carries off its balancing act and never sinks into parody. Like Star Wars IV A New Hope (1977), Raiders Of The Lost Ark caught everyone by surprise, no-one had ever seen anything quite like it before, and it was truly breathtaking. From Aztec treasures to Egyptian snake-pits, the film remains a wonderfully good-humoured recreation of the pulp adventures of the past, renewing all their fabulous absurdity for another generation. Perhaps Lucas’s greatest strength (maybe Spielberg’s too) is that he’s never really lost touch with his own adolescence. 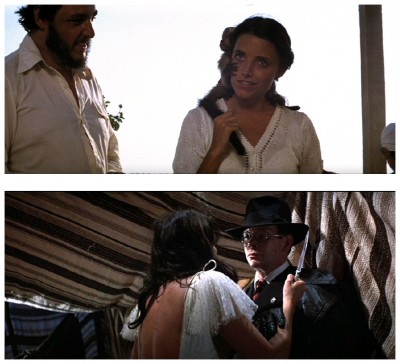 It quickly became one of the highest-grossing movies of all-time and was nominated for nine Oscars, winning four: Best Sound, Best Editing, Best Visual Effects, Best Art Direction, plus a fifth Special Achievement Award for Sound Editing. Some critics raved, like Vincent Canby: “One of the most deliriously funny, ingenious and stylish American adventure movies ever made.” Roger Ebert: “Two things, however, make Raiders Of The Lost Ark more than just a technological triumph: Its sense of humour and the droll style of its characters. We find ourselves laughing in surprise, in relief, in incredulity at the movie’s ability to pile one incident upon another in an inexhaustible series of inventions.” Bruce Williamson: “There’s more excitement in the first ten minutes of Raiders than any movie I have seen all year. By the time the explosive misadventures end, any movie-goer worth his salt ought to be exhausted.” 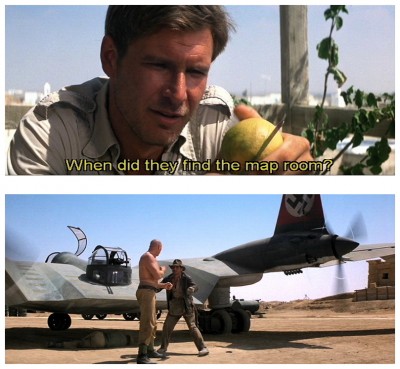 The film, however, was not universally popular. Rolling Stone called Raiders Of The Lost Ark an expensively gift-wrapped Saturday afternoon pot-boiler, and Pauline Kael dismissed it as, “A machine-tooled adventure from a pair of creators who think just like the marketing division.” On one hand, yes, Raiders Of The Lost Ark can be considered as a careful string of effects designed by a couple of knowing millionaires but, on the other hand, it is a film of glowing pristine innocence. This is not really a paradox – with Lucas, the knowingness goes into the craftsmanship, but the innocence resides in the love of the myth itself. The film adventures were expanded with the prequel Indiana Jones And The Temple Of Doom (1984) which disappointed many fans but actually seems to improve on second or third viewings, and the sequels Indiana Jones And The Last Crusade (1989) with Sean Connery as Indy’s grumpy old man, and Indiana Jones And The Kingdom Of The Crystal Skull (2008) but, by then, Harrison Ford was beginning to look rather tired. 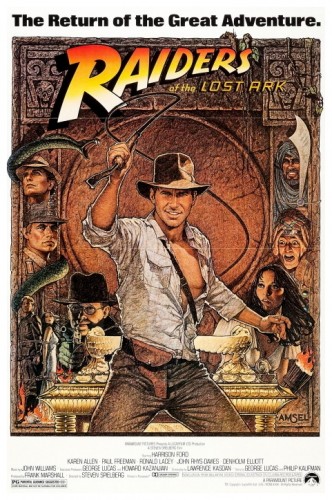 Also worthy of note is the early nineties television series The Young Indiana Jones Chronicles, providing extremely high production values for one of the best television series ever made. Experienced filmmakers like Vic Armstrong, Ben Burtt, Terry Jones, Mike Newell, Nicolas Roeg and Simon Wincer directed scripts by Frank Darabont, Jonathan Hales, Jonathan Hensleigh, even Carrie Fisher, but that’s another story for another time. Right now I’ll bid you a good night and look forward to your company next week when I have the opportunity to put goose-bumps on your goose-bumps with more ambient atmosphere so thick and chumpy you could carve it with a chainsaw, in yet another pants-filling fright-night for…Horror News! Toodles! 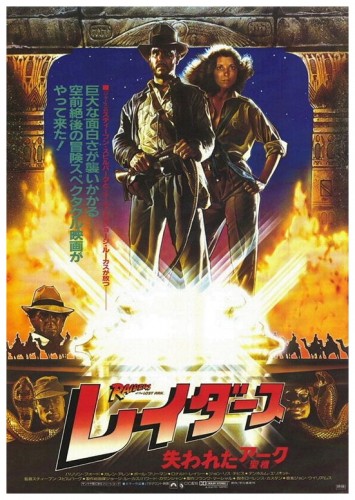