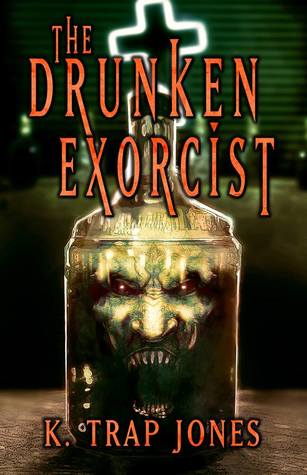 I usually have some snarky lead in, but could not come up with one here that did not come across as completely dickish. Make up one of your own, then place it here in your mind.

The Drunken Exorcist is the incredibly short tale of Father Schnitt, an exorcist who is drunk. I know, who could have seen that coming, eh. He found out early in his career 1.) that gentle, talk-based exorcisms don’t really work and 2.) that demons suffer much more under the touch of whiskey than they do holy water. Explains why I’ve been demon free since 2004. Give the man some firearms, his trusty machete and a bottle of amber delight and he’s ready to tear some soulless freaks apart.

The premise here is fun enough. Remove all the prissy elements from exorcism stories and replace them with ass kicking and guns and liquor and anger and awesomeness. You had me at the bad pun on the back page description. I was expecting raucous rock n’ gore with maybe a bit of religious background to give it heart. Hell, throw in a noirish broken and bitter main character and I could cream my pants just thinking about it.

Unfortunately, I couldn’t maintain my excitement while reading. It became incredibly clear three chapters in that Jones was falling into the common trap (see what I did with the pun there?) of the journal format: a series of events that don’t quite constitute a story. Too many of the chapters are simply a description of a demon the good father fought. Coming in at a scant 90 pages, it really could have been cut down by half with no one noticing the difference.

Maybe this structure could have worked better if the demons were given more personality, but they were nothing more than one note jokes outlined in the title of the chapter (The Fat One is gluttonous, The Shitty One is fought in a bathroom, etc.). Even the main character is kept pretty thin, and you spend most of the time in his head. He comes across as nothing more than a guy who kills people to get demons out because demons are bad. We also aren’t really given a reason to believe that last statement, besides the fact that they take over people who have no life beyond becoming possessed. The professor could have been interesting, but he spouted some rhetoric and was torn up too quickly to find out.

Then there are the more nit picky things. I usually don’t gripe about editorial concerns but there were far too many downright weird choices in wording that turned the prose clunky and completely pulled me out of the tale. “I awoke by the sound of tapping on glass” may not be grammatically abhorrent, but it hits the ear all wrong. There are also a few factual problems. The one that killed everything for me pops up near the end, with the mention of “Father Christopher, leader of the church.” That’s his title. We’re all pretty comfortable in the knowledge that the Catholic church is the only one that has traditionally believed in exorcism. I’m sure we all know what the title of the head of the catholic church is, and it isn’t “leader”. That proved too much for me.

Okay, so I skipped the usual intro because I usually try to find a relatively even slant to my reviews and everything I started with was just plain mean. Then I managed to say a bunch more mean things in the rest. If you look at it as a collection of tiny vignettes of a man who kicks ass for the lord (glory be to St Peter Jackson), then you’ll probably have a decent time. I just couldn’t find it for myself here.

Buy it directly from Necro.