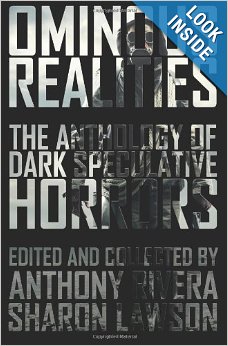 A collection of sixteen tales with a common theme surrounding the twisted, macabre and often sinister tendencies in post-apocalyptic times:

How To Make A Human By Martin Rose-A robot named Romeo Dyer learns there are consequences to playing God even after Armageddon.

On The Threshold By William Meikle-Two researchers Connon and John discover the atrocities of pushing science too far.

Doyoshota By Ken Altabef- A team of scientists embark upon an investigation to determine the cause and effect of an infinite humming sound within the Nevada desert.

Metamorphosis By J. Daniel Stone-Delilah and Rez find a healing purpose in their music.

We Are Hale We Are Hole By Eric DelCarlo-Tatum and Debkowski, two ripjacks vie to stay alive and research reach retirement before their high risk employ terminates them first.

Pure Blood and Evergreen By Bracken McLeod-Pyotr cel Tinar dwells in the shadows between block A and B hidden from the ruthless New Republic.

John, Paul, Xavier and George (But Not Vincent) By Hugh A.D. Spencer-Under palliative care a terminal patient may be the missing link to stopping the world from destruction.

Born Bad By Jonathon Balog-Lucien has an unexpected revelation about morality thanks to Father McCarthy.

The Last Bastion of Space By Ewan C. Forbes-Ania and Noah will do anything to make ends meet in a world few on jobs less on space but will their recent discovery come at a cost to their relationship?

Every Soul Is A Grimoire By Alex Griffen-Harvey and Cameron two special agents watching a surreal novelist Pallentine realize his body is void of soul.

From The East By Alice Goldfuss-One woman’s primal fear of c**kroaches becomes a game in survival of the fittest.

Deciding Identity By Paul Williams-Robert Norton Maskina has a dual reality in a parallel universe. Each identity must decide what is best for all humankind.

The Last Elf By T. Fox Dunham-Two German soldiers realize there are consequences to hunting creatures of folklore.

Every now and I again I tend to reflect upon why it is that we read. In an age where children can navigate an IPad before being fluent in tying their own shoes it’s a marvel unto itself there is a market that remains for creative literature. Despite the information highway and plethora of technological gadgetry it is refreshing to see the horror genre in print is arguably more popular than ever. Publication houses are keeping with the times mind you, diversifying in an assortment of eBook formats. With the advent of new formats is also the number of new publication houses spawning all over the globe. Grey Matter Press is no exception with its inaugural release Ominous Realities.

The short story module is a lost art form unto itself. Not every author who has celebrated success in the novel sector can boast the ability to pen a brief tale. Ominous Realities boasts a formidable array of talented writers. The diversity of voice, style and prose is extraordinary and truly has something for everyone.

A common thread of dread and despair often setting in post-apocalyptic era transcends unto a massive market in commercial fiction. Where the horror genre not only in film but in literature is more popular than ever, its crucial to have a firm grasp upon the market place. The fine people at Grey Matter Press know their market well and exploit their collective audiences’ primal fear of the unknown.

Often created with a Sci-Fi flavour, these tales translate well unto a readership both new and seasoned alike. As I’ve often struggled with science fiction forever spiralling down the abyss of exclusive jargon and inconceivable concepts I can honestly state that Ominous Realities stands on its own in terms of appeal, allure and integrity. One does not have to be a literary major and biophysicist to truly appreciate the adventures within.
Each author preys upon the subconscious forever moulding and sculpting our primal fears of the unknown.

Many of the stories are versed in first person perspective to best harness emotion and illustrate the senses. I’ve always been a fan of first person persona as it places the reader in the helm of each creepy voyage.

It’s equally refreshing and encouraging to see the tales transposed in shades of Twilight Zone or The Outer Limits type aura. Each of these serials were proven effective blueprints for success for decades and generations among enthusiastic fans. Any of sixteen stories within Ominous Realities would translate brilliantly in a television format as the reading experience of each is eerily similar to a movie reel rolling within our imaginations. A spectacular introductory edition from Grey Matter Press and I highly anticipate further odysseys.