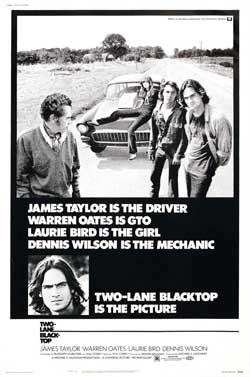 Story of two men drag racing across the USA in a primer grey 55 chevy. Wilson is the mechanic, James Taylor is the driver

Directed by Monte Hellman, “Two-Lane Blacktop” is regarded as one of the earlier 70’s car based cult classics. It’s most recognized trait is that is one of the only films from that era that features singer/ songwriter James Taylor (playing the character simply titled “the Driver”). Riding co-pilot through the film is the famed Beach boys drummer Dennis Wilson as “the mechanic”. 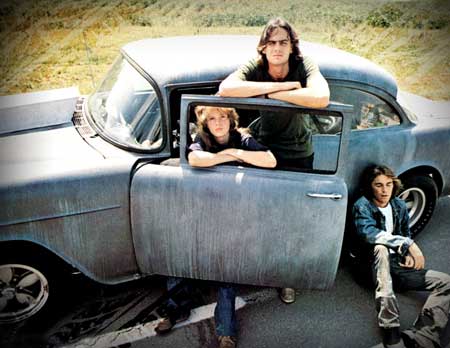 Fans of 70’s cinema would also become familiar with another car racing based film that same year by the title of “The Vanishing Point”. The 2 films were most likely influenced by the film “Easy rider” which debuted 2 years earlier. Despite eras and influence, it was clear that car films were at the height of “film themes” during that time. “Death Race” and the film “Eat my Dust” would arrive a few years later.

“Two-Lane Blacktop” is not the kind of movie that present day fans might completely feel at ease with. The film employed minimal use of dialog keeping much of its action at bay seemingly more comfortable with presenting to its viewers a somewhat boring road trip movie. 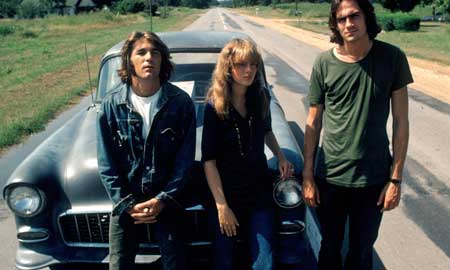 Even the characters were given generic names that seemed more like nicknames than anything. Warren Oates plays an on-road owner of a GTO who’s confidence seems to blanket his otherwise drab and troubled life. We become so familiar with his storytelling that in the first instance he actually repeats it word for word to the same passenger twice. GTO, as he is called during the film changes his road story with every new passenger in an effort to impress them.

The heart of the film stays consistently-focused on Taylor and Wilson who seem to live their life for the moment from town to town challenging locals to drag races. Much like the techniques of a street hustler, the 2 of them manage to make enough $ just to last them up to the next race. Along the way they pick up a hitchhiker simply named “the girl” (Laurie Bird). While the credits do also list her as “the girl”, at one point she is called by her real name “Higgins” (for those who chime into the subtitles). The 3 of them spend most of the film within a gray ’55 Chevy. “The girl” becomes a central connection within the story as she hops from car to car and back again often sleeping with the drivers while staying pretty un-emotionally attached. 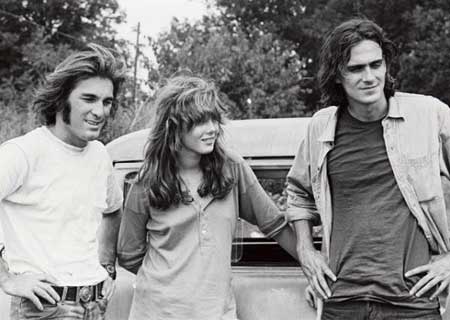 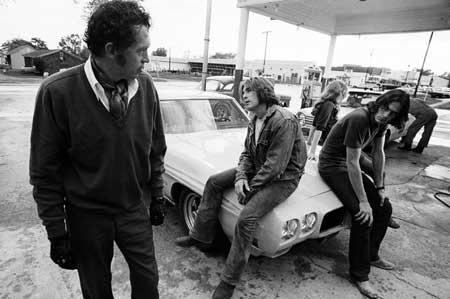 As the film reaches its middle point, a challenge is introduced between the Taylor, Wilson and the GTO driver. Pinks slips to whoever makes it to Washington, DC first. This race actually becomes more of a social road trip as the drivers continue to bump into each other along the way and become acquainted thru the various towns. The movie is rich in car dialog exchanges often referring to such things as carburetor jets and model specifics that could only appeal to auto fans.

Since its inception, the film has managed to receive favoritism among the critics as being more metaphorical than anything. Its final scene never resolves and ends on a filmstrip being burned further adding a dark disassociation to the production. For many this film may sit poorly with its tired and confusing narrative that is so bland at times it can only serve as an intended point for self-interpretation. 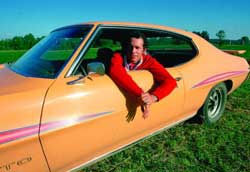 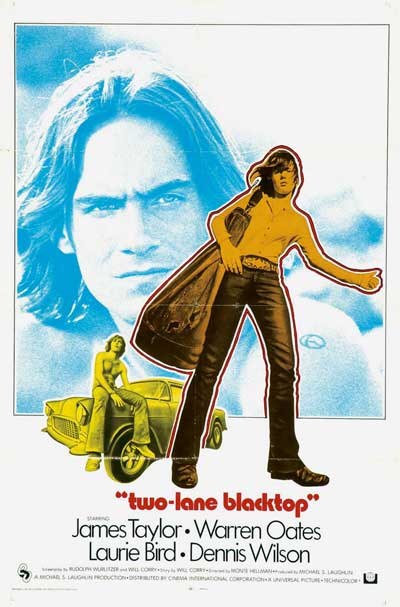 The film bombed at the box office but has achieved cult status over the years. The irony of the film arrives in its slow moving architecture. On one hand we have 2 drivers who seem more disinterested in racing than what should be their passion. Both Wilson and Taylor barely communicate and yet are together throughout the whole film in a unconnected manner. The irony here is the unremarkable performance that taunts its audience with a series of un-resolves. By the 3rd act even the “grudge match” seem pointless positioning the characters in a obvious loss of interest. This is reinforced by the remarkable absence of a music soundtrack which seems more comfortable over the sounds of engines than energizing its scenes. What music we do get is curiously hillbilly and country rooted rather than a rock fueled base you’d come to expect.

To this day “Two-Lane Blacktop” is regarded as bleak and non-traditional delivering characters who are void of any real purpose despite being ironically disinterested in everything that we’d expect to arise out of a road film. Perhaps it was Monte Hellman who delivered a unsung hero of brilliance at the cost of deceiving everyone. For this and all these reasons, “Two-Lane Blacktop” is uniquely culty and in a world unto itself. 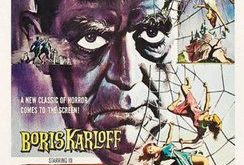 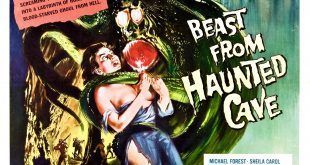 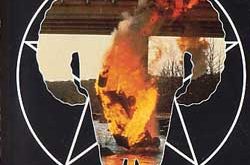