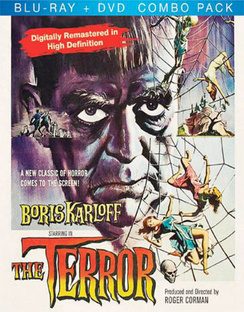 “France in the Eighteenth Century. Lieutenant Andre Duvalier has been accidentally separated from his regiment. He is wandering near the coast when he sees a young woman and asks her for directions to Coldon, where he hopes to rejoin his regiment. But the woman doesn’t answer, doesn’t even greet him and walks away. Eventually she takes him towards the sea, where she disappears in rough water. Andre loses consciousness while trying to follow her, and is attacked by a bird and awakes in a house where an old woman claims never to have seen the woman. After he leaves, he sees the woman again, and while trying to follow her, is saved by a man from certain death. Andre learns that in order to help the girl, he must go to castle of Baron Von Leppe, and when he arrives, Andre sees the woman looking out of a window. However, Baron Von Leppe is old and seems reluctant to let Andre in. He claims there’s no woman in the castle, but shows Andre a painting which does indeed portray her. Andre learns that she is the Baroness, who died twenty years ago. What is the baron’s secret?” (courtesy IMDB)

REVIEW:
Once upon a time, the world’s second cheapest producer Roger Corman had horror film legend Boris Karloff and a leftover set for a weekend, and, not being one to miss an opportunity to avoid spending money, he made a feature film appropriately called The Terror (1963). Actually, he made a mess, wasted Karloff’s time, captured Jack Nicholson‘s worst screen performance ever, and puzzled movie audiences for decades. Now it’s your turn.

There’s an interesting tale behind the making of this cinematic fiasco, and we all know how a little trivia can brighten our lives. The story begins when the filming of The Raven (1963) was wrapping up, and Corman was looking at the Gothic sets thinking that it was such a shame to let them all go to waste. The cogs in the director’s mind were grinding over what to do with that creepy castle set, when he realised he could film the castle interiors over the weekend and other scenes later. It seemed so simple! The only tiny problem with this plan was that he didn’t have a script or even a story, so he called Leo Gordon, genius behind The Wasp Woman (1959), and explained that he needed scenes to shoot immediately and the rest of the plot could be sorted out later. Now all Corman needed was actors for this evil experiment. He already had Boris Karloff handy, and a name like that was sure to attract a stellar cast.

Dick Miller may not be stellar, but he was available and agreed to play Walter Paisley…I mean the servant, Stefan. We’ve seen him before in A Bucket of Blood (1959) and The Little Shop Of Horrors (1960), so if you don’t know everything about him down to his shoe size by now I can’t help you, except to say that he’s been a taxi driver or shopkeeper in just about everything. And he directed an episode of Miami Vice, but if you can’t say something nice about someone…

Gustav the part-time mute was Jonathan Haze, another Corman regular who was in The Little Shop Of Horrors (1960), Teenage Cave Man (1958), The Saga Of The Viking Women And Their Voyage To The Waters Of The Great Sea Serpent (1957) and Not Of This Earth (1957). He was last heard as a voice actor in the cartoon series The Angry Beavers. Dorothy Neumann, who first met Corman playing Meg Maud in his take on reincarnation, The Undead (1957), here plays the crone Katrina, only this time she’s not so good a witch being all out for revenge. All of this is great fun for absinthe-guzzling film fans like yours truly. 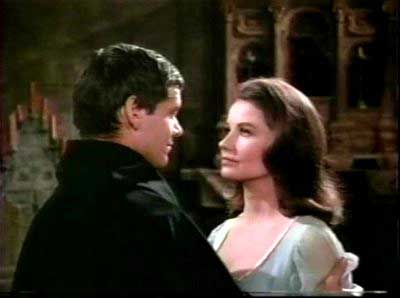 The lead role, Lt. Andre Duvalier, is played by a young Jack Nicholson, who Corman managed to convince to hang around after also appearing in The Raven. He was still about a decade away from making his first really good dramatic film, Five Easy Pieces (1970), but you can see flashes of the talent that would make him the megastar he later became. Jack Nicholson is perhaps the coolest man in the world. Let’s face it, anyone who can make love to a young woman while her father photographs the event, has got to have something. John and Angelica Huston did manage to save face to an extent by hiding the scene in a feature film cunningly entitled Prizzi’s Honour (1985), while Jack was always under the impression he was making a short film called Jack’s Oats. After Richard Dreyfuss won the Academy Award for best actor in the seminal chick-flick The Goodbye Girl (1977), he encountered Jack in an elevator, who simply said “You’re lucky I didn’t make a film this year.” There’s no denying the fact that Jack has It. It’s difficult to find a chink in his armour. For instance, to criticise him for having won only three Oscars out of twelve nominations would seem, at best, churlish. What do you say to the one actor who refuses to work with master director Francis Ford Coppola, a seemingly natural block-busting combination. “Why do you refuse to work with Francis Ford Coppola?” would seem like a possible opener. 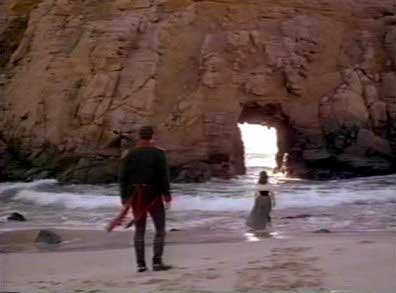 Although Jack refused to comment, Francis told me it was he that refused to work with Jack, a decision he made half a century ago while filming the Roger Corman montage The Terror. Francis had conceived a simple but beautiful scene of Jack walking over a hill disturbing a swarm of butterflies. The film crew spent almost the entire day collecting butterflies for a once-only take. The sun was setting, Jack came over the hill, the butterflies were released then Jack, ever the professional, starts flapping his arms like an idiot and says, “Oh, was that a take?” Despite Coppola’s opinion, many people believe Jack to be the Son Of God. This belief was fueled when Jack took on the role of McMurphy in One Flew Over The Cuckoo’s Nest (1975). It later transpired, however, that the name McMurphy said backwards did not, in fact, sound like ‘Jesus’ at all. Jack himself refutes the idea totally. As he put it, “Well, perhaps I am, I don’t know. I’m certainly related to God, I think he’s my nephew.” This obviously upset God, who has refused to speak to him ever since, a fact that hasn’t bothered Jack in the slightest. In point of fact, it is Jack and not God who continues to land starring roles in major motion pictures, whereas his nephew (if indeed he is) has made infrequent appearances since his embarrassing and somewhat grandiose performance in the arrogantly titled The Greatest Story Ever Told (1965). But again, I digress. Back to The Terror.

Only lacking an actress for the role of – well, it’s a bit ambiguous really – Jack suggested that his wife might now have a free weekend. She was Sandra Knight, a bit-part actress in many television shows of the sixties and a few horror films including Corman’s Tower of London (1962). Not long after this her career went into a sharp decline, which oddly enough coincided with her divorce from Jack. To say the two-day shoot was a challenge to everyone involved is an understatement. The actors were not sure of their character’s motivations due to the roughed out story line, so nobody knew what was going to happen to them. Corman kept shooting through those two days on that castle set not even bothering to slate some of the shots or cut the camera. However, he eventually came to the realisation that he needed more of a movie.

So Corman hired an obscure young director by the name of Francis Ford Coppola to shoot some scenes around the beach for a couple days, which in true Coppola style turned into eleven days. Coppola then had another job offer from Ray Stark’s company Rastar, which he wisely accepted, so Corman had to find someone else. Coppola suggested film student Dennis Jakob. Jakob filmed some shots that would be used at the film’s finish, and in exchange then used Corman’s equipment to film a Civil War movie for his thesis. Since Jakob had to go back to his studies and the film still wasn’t fitting together properly, or indeed at all, Corman got Monte Hellman to shoot some scenes on the cliffs in Palos Verdes, changing some things in the script along the way. However, before long Hellman was offered a better job, so Corman brought in Jack Hill to film some scenes to bring the movie together. With just one day of shooting to go, Hill left. By then, Nicholson had requested to direct part of the film and Corman, probably out of sheer frustration, granted his wish.

Gee, so much work for a so-called quick and easy movie! Here we have a hodgepodge of directors and their different interpretations of a script being written as the footage was shot. Somehow something had to be done to make some sort of sense to it, so a plot twist was created. Does it work? Wait and see. There are many confusing things, too. What about the cradle in Ilsa’s room? Why did mute Gustaf speak? Why did Mrs. Bates make a cameo at the start of the movie? Why on Earth am I discussing this movie? Well, I should know the answer to that last question by now, shouldn’t I? In its own way this was a template for recent cinema: A mix of grand visual styles without a decent script or plot. If you’re confused, don’t feel bad, it’s a natural consequence of watching The Terror. It saddens me to hear people straight out of Film Appreciation school trying to say something sophisticated and intellectual about a Roger Corman movie. That’s not what they’re for. What they were for was fun. They were for Drive-In Movies in their heyday, and late-night community television fare now that nobody else will play them. What they were was absurd, escapist entertainment.

All things considered, The Terror turned out much better than it had any right to, which is to say that it’s not totally unwatchable. By this point in their respective careers, Corman and Karloff could do this sort of thing in their sleep, and possibly did in this case, and their unshakable self-assurance goes some way toward making up for the movie’s almost innumerable faults. They can’t disguise the complete lack of a pre-planned story, however, nor paper-over the fact that none of the pieces of what eventually came to pass for The Terror’s script quite fit together. I’ll try to discuss something a bit better thought-out next week (but no promises) as we expose you to another lethal dose of schlock for…Horror News! Toodles! 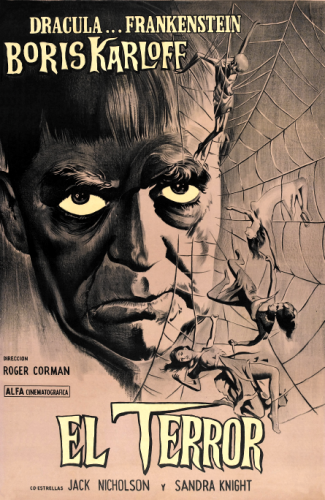