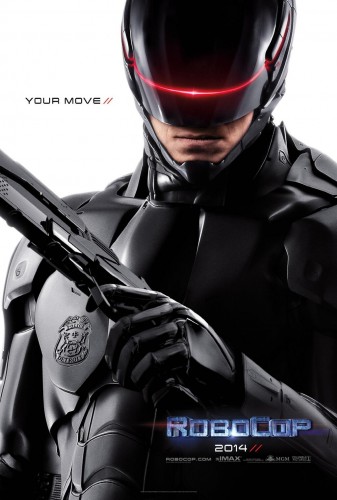 When Detroit police officer, Alex Murphy, is critically wounded by a criminal mastermind his only hope of survival is the experimental robo-program at OmniCorp led by Dr. Dennett Norton. CEO Raymond Sellars sees Murphy as an opportunity to introduce his “robot soldier” technology to U.S. soil by putting a man into the suit making him a RoboCop.

Robocop (2014) succeeds in making its own film while acknowledging and respecting its cinematic origins. Writer Joshua Zetumer and director Jose Padiha cast aside the campy, over-the-top aspects for a more human and action oriented retelling of Alex Murphy’s story. But for a film that has a lot of heart, it seems to lack its own distinctive beat. The direction is sharp, the acting is thoroughly enjoyable and the robot effects are a blast. It has all the right ingredients for a great sci-fi action film. But it never achieves that bite, the satire, the commentary that the original did. That being said, Robocop is a terrific film, a fun, energetic, thrilling movie with Joel Kinnanman giving a winning performance and Gary Oldman providing a complicated, rich supporting performance. Paired with Michael Keaton and Samuel L. Jackson chewing on the scenery and Jackie Earle Haley having a fun as Rick Mattox, OmniCorp’s military tactician, the cast of Robocop make the film. 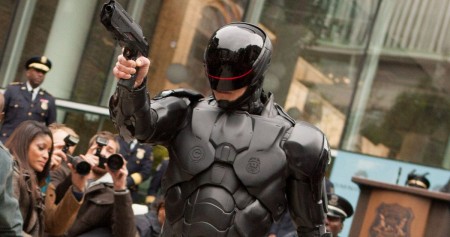 “Dead or alive, you are coming with me.” is one of the many fondly remembered lines from the original Paul Verhoeven film from 1987. Robocop (2014), as do many modern remakes, strives hard to keep these signature lines in the film and manages to fare far better than many recent examples. While they provide a smile on those who remember, they also serve to remind the same individuals of what is lacking in this version. The question becomes does the rest of the film’s assets, which are thankfully many, make up for the missing socials stings and comical highlights. The presence of Samuel L. Jackson as Pat Novak pick up much of the slack balancing the more straightforward core narrative with the media’s exaggeration of each event. In these moments, Robocop sizzles and stings especially when Michael Keaton’s Raymond Sellars appears on the show opposite Senator Dreyfuss (Zach Grenier). Jackson’s dialog is sharp, satirical and delivered in a style only Jackson can. The film even exploits the PG-13 restrictions on the film and Jackson’s famous use of colorful language with the best use of censored “bleeps” in a good long time. 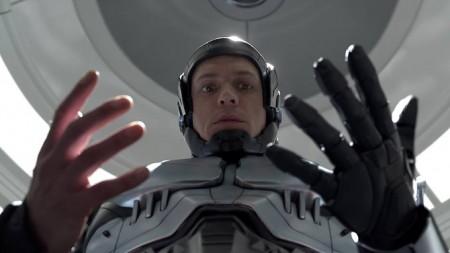 It may be Joel Kinnaman – who has made a name for himself with the popular TV show, The Killing – who has the largest challenge in Robocop with the starring role as Alex Murphy. Peter Weller is identified with the role, the delivery and emotion behind the original character. Can he match “Dead or alive, you’re coming with me” in the same manner? Kinnaman brings his own unique qualities to the role, more down to Earth, more of a family man and equally honorable. As a police officer in this future Detroit, his Murphy is determined to bring down a local crime lord struggling with corruption within the force taking risks and working outside the rules; as a family man, he is a loving father and husband, charming and passionate. When he finally sees what he has become, not just the machine, but what lies underneath the robot exterior, the impact is felt by the character and the audience alike. It is not just a visual jolt, which is shocking enough, but an emotional gut punch to the character and the audience. There is not much left yet OmniCorp and Dr. Norton continue to toy and tinker with what is left, the brain, the personality, the man inside. But what makes him a man? What makes up his soul? Can Murphy recover when Dr. Norton is directed to hide Murphy’s personality, desires and fears under a stream of technology and drugs? What kind of Robocop will he become?

As Dr. Dennett Norton, Gary Oldman brings a surprising amount of depth and complexity to the role. Oldman is always a highlight of any film in which he stars, but he is rises above the material. Norton’s struggles, while not as emotional as Murphy’s, are as interesting as anything else in Robocop, topping the effects and action. Sellars and OmniCorp are presenting the Norton character with an opportunity that challenges his morals against unmeasurable benefits and potential for bettering society. This gives Oldman the perfect mixture of modern scientific marvel and a mad Dr. Frankenstein to balance his performance. Each decision takes a toll on Norton with Oldman painting every success and consequence on his face, in his eyes, his voice. The more he buries Murphy’s humanity, the more Norton chips away at his own soul. It is fascinating and could be a film on its own thanks to Gary Oldman’s terrific performance. 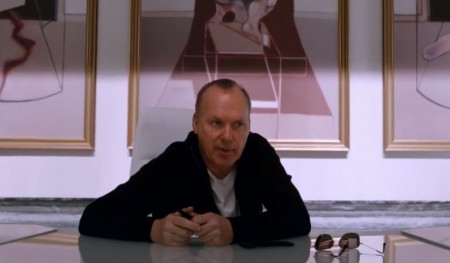 While it has been a while since Michael Keaton has had chance to show off his timing and talent, Robocop offers him the perfect scenario with CEO Raymond Sellars to remind everyone. He gets to chew on scenery with Samuel L. Jackson and show off his best Bruce Wayne as he constructs his master plan alongside his head of legal affairs Liz Kline (Jennifer Ehle) and his head of marketing Time Pope (Jay Baruschel). He breathes a lot of life and fun into the film with his lively character relishing in the manipulation and power the role holds. It is great to have Keaton back, especially the fun Keaton with the playful wink in his eye and sly smile, even his most scowling of grimaces. 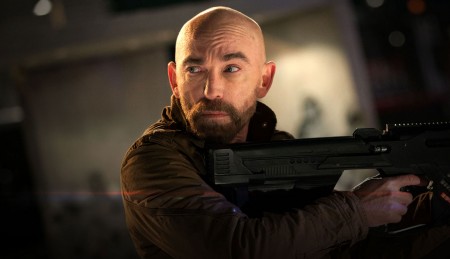 The entire cast brings a lot to enjoy in Robocop elevating the film above its sometimes pedestrian PG-13 low notes. Even though the aforementioned Ehle and Baruschel are frustratingly underused, others get their moments to truly shine in supporting roles. Jackie Earle Haley is superb as the military technician Rick Mattox brought in to train Robocop. Mattox does not like the idea of putting a man into the machine in the slightest and Haley gets the chance to bring a ferocity the role and a clever sense of humor. It what could have been simply the butt of a later joke in the film, Haley brings so much than that single note to the role, the film could have benefited with more of Haley and his character. Abbie Cornish is equally successful in making more of her role than the situations might suggest. She is not given nearly enough screen time, but when she is on she brings an emotional bond to the lead character and the heart of the film. She is torn between losing her husband or signing him over to an experiment that could miraculously save his life or tragically sign his soul over to the corporate devil. The loss she deals with is there just below the surface, a little more of that would have gone a long way. 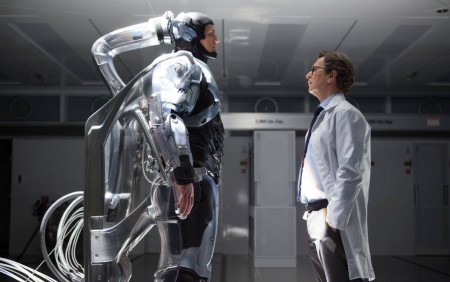 The visuals in Robocop are modernized a great deal for today’s audiences, benefiting more than many recent remakes from added dependency of CGI. Much like Rise of the Planet of the Apes, the passing of the effects torch from practical to CGI is successful due to keeping the actor in the mix. The quieter moments with the character work in a far more interesting way especially when the mechanic and the science behind it all is pealed away. This Robocop ends up feeling more like a man in a machine than a man in a costume the original often felt like. Combined with the sounds of gears and machinery moving with every step, this Robocop steps up to a monumental FX comparison brilliantly and completely. He is faster, slicker, more aggressive. Within the confines of its PG-13 rating, the film focuses more on the metal where the original was more gooey, bloody and gross. A for this version, within the context of its own story, the lack of graphic gore works just fine; however, by comparison – which is both unavoidable and unfair – the 2014 version feels watered down, held back from digging into the true consequences and destructive nature of the character’s actions. Where the original displays an insatiable appetite for the gruesome side, Robocop (2014) casts that aside for a more straightforward sci-fi action presentation; this leaves the film just missing its mark – it is entertaining but not entirely a solid hit. 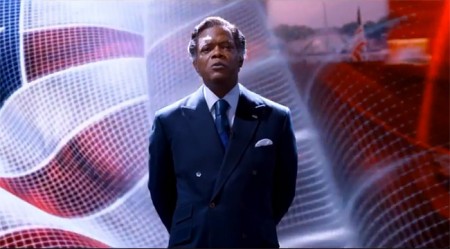 Robocop (2014) is an entertaining re-imagining of a campy classic. Action packed, the film contains great performances and a fun sense of humor in its bookend Samuel L. Jackson set pieces. Not as wicked and gory as its source material, this version is more focused on the characters and the science of it. For much of the film, this approach works extraordinary well, especially when it involves either Gary Oldman or the mechanics that make up Robocop himself. The approach however lacks when it comes to the villains in the film such as Antione Vallon (Patrick Garrow) the gun /drug kingpin who is responsible for Murphy’s initial demise. Jackie Earle Haley almost makes up for it, but is not given enough to affect the entire film. The updated suit works far better than early trailers and promotional material suggested with Kinnaman giving the role a healthy dose of humanity. Robocop is worth it for the performances alone, the robo-action backs that notion up. While it will not have a lasting impact as the original did, it is a far better example of handling remakes than recent disasters have been.