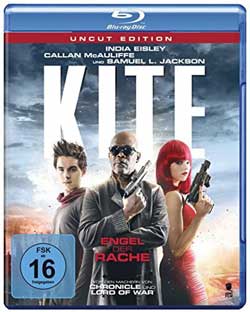 In a dystopian future, a young girl seeks revenge on the men who killed her father

Kite tells the story of Sawa (India Eisley), a young girl living in a city where crime and gangs rule the streets. After Sawa’s mother and father are found murdered, she desires nothing more than revenge against the killers. Karl Aker (Samuel L. Jackson), her father’s ex-partner on the police force, assists Sawa with her vengeance. Sawa becomes a deadly assassin, violently killing those that would harm others as she searches for her parents killers. Along the way, she finds a mysterious stranger (Callan McAuliffe) from her past who also aides her in her pursuit to find the killers.   As Sawa blasts her way throughout the city she makes her way through criminal after criminal she finds a world of human trafficking only to uncover a horrifying truth.

Kite is based on a fairly popular cult manga that was also turned into an anime movie of the same name; although the manga is much more graphic in nature. The manga involves much more violence, blood, rape, nudity and pedophilia. This movie is rather toned down for an American movie audience. Kite is supposed to take place in some dark future, but honestly looks more like modern day Detroit. Had this movie been made 20 years ago, then it would have looked more futuristic.

Let’s go over some of the good things about this movie. This is a pretty decent action movie. The fight scenes are numerous and enjoyable and the cinematography is quite good.

The music is good as well. The acting, while nothing Oscar worthy, is not any worse than what you would see in any other big budget action movie. The actors are all pretty decent with what they were given and they managed to pull off some good chemistry together. India Eisley shows off some decent action moves, but nothing quite like Chloe Grace Moretz’s character, Hit Girl from Kick Ass, but she certainly tries. Samuel L. Jackson’s performance did not disappoint me other than he pretty much played the same character that he does in several other movies, but that is ok, because hey, it’s Samuel L. Jackson.

Now let’s discuss the bad. Most notably would be the writing. I don’t know if the writers ever really read the manga or seen the anime movie, but they could have taken quite a bit more from that original work and added to this movie. This goes for the plot as well. There is quite a bit missing from this movie where if you are not familiar with the manga, you miss out on some more minor information that actual could clear up some of the plot holes.

I do understand that the director could not make this very much like the manga because the movie would have had to been rated NC-17 and it may not have made it past any distributors, but I feel the lack of certain details does keep the viewers in the dark regarding some of the plot. This flaw also keeps Eisley from really bringing her character more to life than she could. Sawa, in this movie version, has been stripped down and you are not given a true feeling of how damaged she is and why she is compelled to see her revenge. You know what happened, but you are never given a clear showing of just how emotionally and psychologically damaged her character is since they leave those parts out. 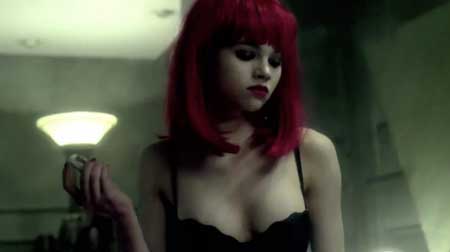 To be honest, the things that are bad in this movie are nothing more serious than what you would find in any other big budget movie. I would rather watch Kite than say, another Expendable movie, or Die Hard, or anything by Michael Bay.   This movie is far from perfect, but I did find it enjoyable for what it was.