When Zoe Benson, a young teen, accidentally awakens hidden powers genetically handed down from the time of Salem and before, she is whisked away to Miss Robichaux’s Academy for Exceptional Young Ladies. The academy is run by Cordelia Foxx, the daughter of the supreme, Fiona Goode. Along with her fellow classmates, Nan, Queenie and Madison, Zoe suddenly finds herself immersed in a world of witches, voodoo and the supernatural.

With two distinctly different seasons in both content and tone of FX’s television program American Horror Story in their back pockets, show creators Ryan Murphy and Brad Falchuk guide the third installment into the world of witchcraft, voodoo and supernatural mayhem with Coven. Most of the regular cast members are back: Jessica Lange, Sarah Paulson, Frances Conroy, Evan Peters and Lily Rabe. Taissa Farmiga, Jamie Brewer and Denis O’Hare return from the first season while Emma Roberts, Kathy Bates, Angela Bassett, Gabourey Sidibe, Danny Huston, Patti LuPone and Lance Reddick make their first appearance in the delightfully deranged American Horror Story world of insanity and horror. It is an incredible and exhausting cast. And, oh, yeah, Stevie Nicks gets to join in on the fun. The show is defined by its characters and the impossibly grotesque situations they find themselves in. For a change, the main characters are as steeped in the supernatural, most of them being witches, as the past characters were “normal” only to be affected by the unnatural. This makes for a plot rich with possibilities and surprises, which is, in part, why the end results are more lackluster than ever before. 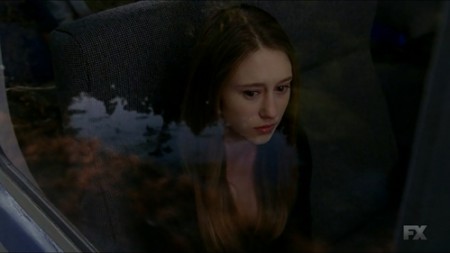 While American Horror Story Coven is full of horrific events and shocking visuals and plots twists, it is the sheer amount of varied plots and motifs that weaken the third season – a lack of focus. Most of Coven’s story deals with who will become the next Supreme. The current Supreme, Fiona Goode (Jessica Lange), finds herself knocking at death’s door as she begins to realize that one of the witches at Miss Robichaux’s Academy for Exceptional Young Ladies is gaining her powers in order to take the reign of the Coven. While she discerns which witch is which, the Coven has other problems to contend. The biggest threat is the continuing war with the voodoo queen, Marie Laveau (Angela Bassett), who reignites her attacks on the coven with Fiona’s return. There is also the unearthing of Delphine LaLaurie (Kathy Bates), a murderer/mad-woman from the 19th century who was given immortality only to be buried alive. The Academy is also home to a rampaging ghost of an infamous New Orleans serial killer, known as the Axeman (Danny Huston), who is given corporeal body once again by Zoe (Taissa Farmiga). In addition there is a bit about a gaggle of Witch Hunters (Josh Hamilton), a bible-thumping neighbor (Patti LuPone), a swamp witch (Lily Rabe) with a passion for Stevie Nicks music and poor, poor Kyle (Evan Peters) who dies early on only to be resurrected as a boy-toy Frankenstein. It all circles (a number of times) back around to who will survive the Seven Wonders to become the new Supreme. 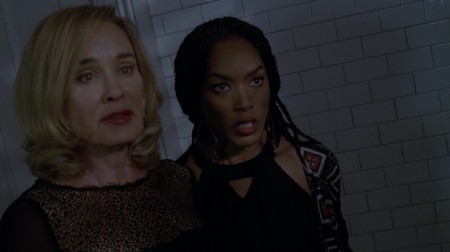 Coven starts out on a high note by focusing on Zoe in the opening episodes. She has just learned of her witch heritage and is carted off to Miss Robichaux’s Academy for Exceptional Young Ladies ala a classic entry into Marvel’s X-Men comic books. It serves as a terrific introduction to the main storyline and the “world” that Coven inhabits. The show quickly introduces Cordelia Foxx as the Dean of the Academy, establishing that witch-dom is on its way out of favor; there are only four young students: Zoe, Madison Montgomery (Emma Roberts), Queenie (Gabourey Sidibe) and Nan (Jamie Brewer). It is not long before Fiona Goode returns to the Academy to uncover who among the students is poised to become the next supreme. Will she train them? Or kill them? The first few episodes are centered around establishing the Academy and its characters, both within its walls (the help, Spalding played by Denis O’Hare and Fiona’s arch enemy, Myrtle Snow as essayed by Frances Conroy) and beyond the stone fences bricking in the yard (Marie Laveau, Delphine and Joan Ramsey). Things start off incredibly strong with creepy scenes including manufacturing Minotaurs, cutting out tongues, rebuilding Kyle and the discovery that Delphine is still alive. 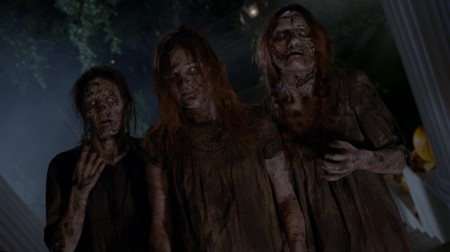 The following three episodes show quite a lot of promise as well, but they begin to reveal the show’s ultimate contrivances and downfall. Thankfully, at this time, those weaknesses are difficult to uncover with all the fun, horrific moments stacked on top of one another. Kyle, the boy stitched together from parts of his dead friends, is returned to his mother’s arms only to be reminded of the pain she caused him when he was…alive. Misty Day, who was burned at the stake, brings herself back from the dead and assists Zoe in attempting to repair the fractured Kyle. The Axeman is revealed and Delphine’s past is disgusting and pathetically vile. Capping everything off is an all out assault on the Academy by a swarm of voodoo zombies. Zoe, who had quickly become a wall flower, steps up to wield a chainsaw cutting through the stumbling corpses, dispatching them in a bloody mess. And these are only the highlights, other atrocities include murder, mayhem and Spalding’s secret passions. Oh, and the decapitation of the aforementioned Minotaur, spoilers. But, something is missing. 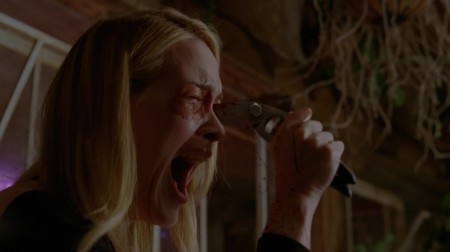 While the show is seemingly on a rush, it begins to lose its focus, the little witches of the academy are easily and quickly becoming over shadowed by the more seasoned cast: Jessica Lange, Kathy Bates and Angela Bassett. Zoe is the worst of the bunch, she falls into the background almost immediately, stepping up briefly only to step back farther into the shadows of the other plot points. In addition, resurrection becomes a too often used gimmick. What was shocking and curious with Delphine, and insane with Delphine’s immortality angle, becomes tired and groan-worthy as most every other character returns in one form or another. It seriously undermines all levels of consequences. It is a theme that persists to the very end of the season. Repetition is another detriment the show falls victim to as the episodes continue. The audience is treated to three witches burning at the stake and two of them are the same witch! Twice! Cordelia looses her eye sight only to regain it…only to lose it once again. And she is not the only one to lose body parts only to have them reassembled later. By the middle of the season, it all becomes trite; even Fiona is questioning her plight, her character, to show great character development and growth only to return to her former self twice fold. It exhausts all that was right thus far. 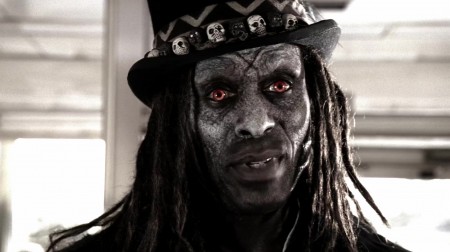 The final episodes sadly meander around with the surviving characters struggling to wrap up their story lines and character arches in a fascinating fashion. Some succeed, most do not. Ugh. Many touch on their themes but end up feeling forced and inadequate, weaker in their conclusions than in their introductions. The later shows also introduce the closest thing Coven has to a true overarching villain, Papa Legba, the voodoo king/demon responsible for Maria Laveau’s immortality and a huge threat to everyone in the show. With all the Vitalum Vitalis rampant within each episode, it seems that only Papa Legba can deliver the true death, to borrow a phrase from True Blood. With him comes brief glimpses into various versions of Hell for many of the characters that provides Murphy and Fualchuk a last minute hail Mary saving grace to hinge rushed meaning and depth to many of the supporting cast. But, in the end, it is the Seven Wonders that rules the roost, that become the ultimate, final story line. Each of the surviving Coven members is up for the title. Who will become the next Supreme? And what will it mean to Fiona Goode? In the show’s final moments it delivers the poignant character development the previous two seasons weaved into the horror, nightmares and screams. 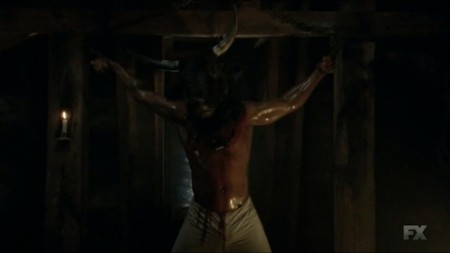 Outside of the famously fabulous acting from Jessica Lange and friends, the monsters and horror are Coven’s highlights and strengths. Delphine and The Axeman, killers both, show the ugly side of humanity, desires and obsessions and uncontrollable carnage. Marie Laveau leads in New Orleans Voodoo with Minotaurs and the living dead. Zoe and Madison reassemble the decapitated Kyle into a teenage Frankenstein. And Spalding, who has his tongue cut out early in the show and then has it hexed back into place, returns from the dead as a ghost with a curious hobby skirting on the more disturbing, dark side of humanity. Eyes are scooped out of their sockets. Victims vomit up deadly bleach c**ktails. American Horror Story Coven does not disappoint in pushing the boundaries and coloring its themes and plot with gruesome details and dark twists and turns to the delight of every horror fan. 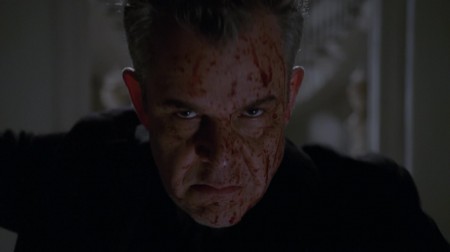 American Horror Story continues to pave new ground with its third season American Horror Story: Coven. It breathes fresh life into horror television (recently, thankfully a very crowded floor) with its unique approach to each season being its own set of characters and story lines with recurring actors in new parts. It allows the show to be familiar yet shockingly fresh and explore new, exciting ideas and themes. Coven is no different than the Asylum and the first season in its embrace of the horrific story-lines and gory details and promises more of the same with the next seasons to come. Coven, however, is less successful than its predecessors in that it allows itself to entertain the less important tangents more than its core, crucial plots. This results in the later half of the season becoming very confused, misguided and meandering. Many key plot points are repeated over and over again with each iteration losing impact and shock value: the same witch is burned at the stake twice; Cordelia loses her sight, to have it repaired, only to lose it again; one of the more vile characters approaches self retribution only to embrace her sordid past and desires at the last moment. American Horror Story Coven is not a failure, not be any stretch of the imagination, it still reigns as some of the more impressive and captivating horror on television today. The season is easily remember and enjoyed for its high points and maintains its momentum to each successive season.