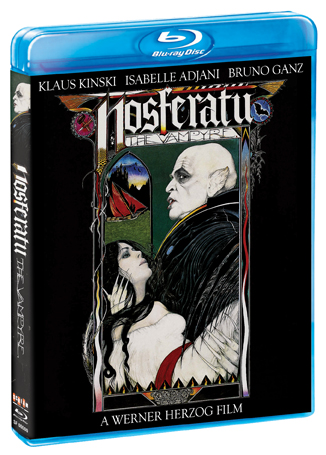 Since its release in 1979, Wener Herzog’s Nosferatu the Vampyre has not only become one of the director’s most acclaimed films, but one of the most compelling and visually-striking interpretations of the Dracula story ever committed to film. In his haunting interpretation of F.W. Murnau’s 1922 classic, Herzog eschews the popular conception of the vampire as confident and alluring, and instead focuses on the tragedy of the creature: doomed to immortality, weary, and disgusted at his own existence. A must for both cinephiles and horror-fans alike, the award-winning Nosferatu the Vampyre makes its Blu-ray debut on May 20th, 2014 from Shout! Factory.

Starring Klaus Kinski, Isabelle Adjani (Camille Claudel, Possession) and Bruno Ganz, Nosferatu the Vampyre comes loaded with extras, including audio commentary with Werner Herzog, a vintage featurette on the making of Nosferatu, theatrical trailers, as well as both German and English versions of the film.

Set in 1850 in the beautiful town of Wismar, Germany, Nosferatu the Vampyre tells the story of Jonathan Harker, who is about to leave on a long journey, despite desperate warnings from his wife Lucy.  Upon his arrival at his destination, he is greeted by Count Dracula: a pale, wraith-like figure with deep-sunken eyes. The events that transpire convince Harker that he is in the presence of a vampire, but what he doesn’t yet know is the magnitude of danger the creature poses to him, his wife and his town.