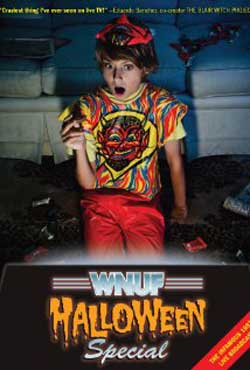 Originally broadcast live on October 31, 1987, the ‘WNUF Halloween Special’ is a stunning expose of terrifying supernatural activity that unfolded at the infamous Webber House, the site of ghastly murders. Local television personality Frank Stewart leads a group of paranormal investigators including Catholic exorcist, Father Joseph Matheson and the prolific husband-and-wife team Louis and Claire Berger. Together, the experts explore the darkest corners of the supposedly haunted Webber House, trying to prove the existence of the demonic entities within. Did they find the horrific truth or simply put superstitious rumors to rest?

WNUF Halloween Special had the potential to be one of the scariest movies that I had seen in a while, the plot is simply enough, a camera crew goes to investigate the vile Webber House, where Donald Webber was told to kill both of his parents by a Ouija board (Yes this sounds a lot like The Amityville Horror). And I feel that if it would have kept on this track that it would have been a great movie, but a few flaws turned an aspiring underground film, into another “watch only one time” films.
The main thing that made me very interested in this film was that it was made in the fashion of an old newscast. You’re probably wondering how that’s different from a few other movies that are made in the “found footage” category. Well first they went to the trouble to make up their own commercials, and since this movie is supposed to take place in 1987, they did a very good job making the commercials true to the style and content of the time period, not advertising the newest laptop or the difference between cell phone providers. Also they have previews for new episodes of some of the channels favorite television shows, also with the same detail to content of the 80’s. 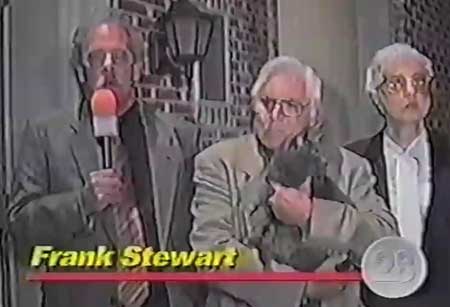 I know that might seem like something simply to be impressed by, and that a few other films have done the same thing, but it just feels different. The way they filmed everything, they didn’t use any CGI, making it looks true to its decade. The film is somewhat grainy, and the lighting is poor, but that’s what makes it look authentic. Not since The Blair Witch Project have I seen a found footage film that felt real. It’s all the things that make this movie look bad that helps make it feel real. It’s all the small attention to details that add up and make it feel legitimate. They even made the DVD cover reflect this, with a child in a plastic devil costume, and the endorsements on the cover try and play up the reality factor to the point where you start to wonder if this movie was a real broadcast.

I guess I should go back and explain what the movie is about. It starts with the evening newscast, where news anchors Gavin Gordon (Richard Cutting) and Deborah Merritt (Leanna Chamish) are giving a recap of the days stories. This goes on for the first half hour of the movie, once again trying to play up the reality angle. Once they wrap up and the suspense is starting to build, we switch over to Frank Stewart (Paul Fahrenkopf) on scene at the Webber house.

He talks a little bit about what had happened in the house and tries to talk to the audience, getting a little chippy as the audience members seem like morons, and then introduces the people who will be joining him inside the supposedly haunted house. We have the married paranormal hunters Louis (Brian St. August) and Claire (Helenmary Ball) Berger and their cat Shadow, who can sense spirits. Also with them is Father Joseph Matheson (Robert Long II). They all go into the house to start the investigation, Shadow runs away giving them their first ominous sign. A couple of other unexplained incidents happen, but they all sit down to have the first ever live séance, where Claire is going to ask the questions from audience members as they call in to the spirits of the house. Once again, Frank can’t trust his audience, since none of the questions have anything to do with the house or its ghostly inhabitants. Things start going very wrong and as everyone tries to escape the house, they encounter something they didn’t expect. 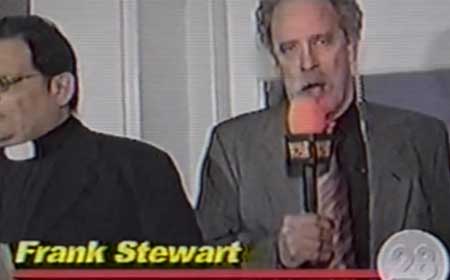 So it sounds promising right? Well it does, but they did a couple of things poorly. First I know that in an hour and a half of television there are a lot of commercials, but it feels like they took this to the extreme. Also they might have thought the placement might have been in the right spots to keep the suspense building, but it does the opposite and kills any momentum that you start to feel. The one other thing that they really screwed up is when the movie comes to a commercial that you have already seen it fast forwards itself past that commercial, killing any thought that this is the true copy of the original broadcast form the news. But the worst is the twist ending, the movie had a very simply plot and you really don’t see the twist coming, but it’s not scary and it feels like a cop out. If they had just focused more on the haunting parts they could have made a great movie.

The one true reason to see this movie is actor Paul Fahrenkopf as Frank, they way he interacts with the Bergers, Father Matheson, and the audience is just amazing. He brings a sarcastic wit that makes him the focal point of any scene in the movie.

If you’re a fan of all things 80’s then this is one you might want to watch, but it’s not going to be easy to get your hands on it. It’s not on Amazon, or EBay, the only place that I have found to buy the DVD is from Alternativecinema.com. They did have a special edition VHS tape, limited to 300, but as of the time of this writing it is sold out, sorry all you VHS collectors, this might be one that you really have to search for. I do hope that they release more of the VHS copy; it just feels like the right format to sit down and watch this movie on. In the end, I feel that this movie will find its niche, and has the possibility to become a cult classic.