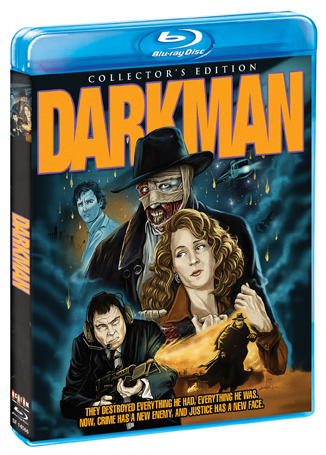 LEAPS ONTO HOME ENTERTAINMENT SHELVES EVERYWHERE OWN IT ON FEBRUARY 18, 2014 FROM SHOUT! FACTORY

***Avid fans and collectors please take note: those who order DARKMAN COLLECTOR’S EDITION Blu-ray from ScreamfactoryDVD.com will receive the exclusive 18”x24” poster featuring the newly commissioned artwork!  These are only available while supplies last.***

In the darkest hour, there’s a light that shines on every human being, but one….

Liam Neeson and Frances McDormand star in this explosive, action-packed thriller from director Sam Raimi. Dr. Peyton Westlake (Neeson) is on the verge of realizing a major breakthrough in synthetic skin when his laboratory is destroyed by gangsters. Having been burned beyond recognition and forever altered by an experimental medical procedure, Westlake becomes known as Darkman, assuming alternate identities in his quest for revenge and a new life with a former love (McDormand).