Film Review: The Hobbit: The Desolation of Smaug (2013) 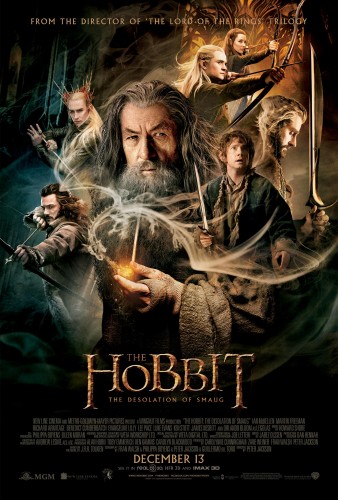 Gandolf the Grey continues to lead Bilbo Baggins, Thorin and the band of dwarves to reclaim Erebor from the fire breathing dragon, Smaug.

With The Hobbit: The Desolation of Smaug, director Peter Jackson continues the adventures of the courageous Hobbit, Bilbo Baggins, in the second in the trilogy of films adapting J.R.R. Tolkien’s iconic fantasy novel. There is no doubt Jackson is a master story teller, film maker and director with this film being a brilliant, gorgeous example of scenery, epic scope and imagination. The action scenes alone are amazing to witness and experience, especially in its high frame rate, 3D presentation.

The effects are marvelous; the variety of fantasy characters entirely fascinating and bewitching, hobbits, dwarves, elves, orcs, spiders and, of course, dragons; and, the landscapes, locations and sets are breathtaking. Even with all this at his hip, the maverick director lets character development, emotional arcs and pacing slip through the cracks preventing the audience from becoming fully engulfed in the story, except for those who are already invested in the source material. It has its moments, such as the elven archer Tauriels’ decision to persue the violent band of orcs or stay and save a single dwarf, a dwarf for which she may or may not have affections, but the major beats with Bilbo and Thorin get buried under the scope, the action and the effects – no doubt left to the next, final installment of the trilogy. By no means a failure, The Hobbit: The Desolation of Smaug is a visual triumph, a monumental achievement in presenting a fully realized, living, breathing fantasy world, Middle-Earth, that is only slightly marred by odd pacing, too many characters with not enough emotional investment and a frustrating cliffhanger. 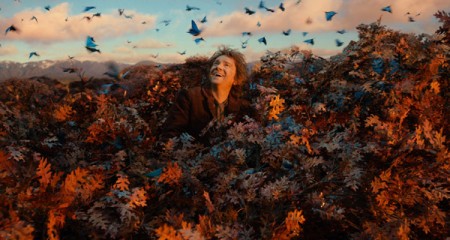 Peter Jackson is one of the most influential, talented and successful directors in the business at this time. The New Zealand director, for which most horror fans remember his gory horror films such as Bad Taste (1987), Braindead (1992) and The Frighteners (1996), is now widely recognized as a cinematic genius having brought to screen the Lord of the Rings trilogy and, now, The Hobbit to delight Tolkein fans and movie fans alike. Those early influences are long gone as the driving factor in his current films; but, every so often, they reappear in astonishing and graphic ways. In The Hobbit: The Desolation of Smaug, Jackson takes pleasure in abusing, punishing and decapitating the Orcs are every turn and with every whim. In one scene, set in the human village, Laketown, the director has an fallen Orc resting in a small boat below the home in which a frenetic battle between the Orc and Elves continues only to be propelled up to the window by another falling Orc landing in bow which results in his being decapitated by Legolas in the process. It’s thrilling and astonishing to watch, for certain, with comical results. But when it comes time for Bilbo to come face to face with Smaug, we see a director that has learned from his King Kong (2005) effort brilliantly handling the threat, scale, action and adventure. In these moments, Jackson shines unlike he has before; it is a memorable, awe-inspiring extended scene.

The Hobbit: The Desolation of Smaug continues Bilbo’s (Martin Freeman) journey with Thorin’s (Richard Armitage) band of dwarves to the Lonely Mountain to reclaim Erebor. Along the way they avoid capture by the orcs by taking refuge with Beorn, the “skin-changer” who thankfully hates orcs more than he despises dwarves. Next they face the giant spiders hiding in Mirkwood, the black forest in a genuinely thrilling and frightening battle for their lives. They are rescued, and subsequently taken captive, by the wood-elves, including Legolas (Orlando Bloom) and introducing Tauriel (Evangeline Lilly). They barely escape the dungeons of the elf King Thranduil (Lee Pace) and the orcs after their heads with the help of Tauriel, Legolas and the human merchant, Baird, who escorts them across the lake to the human village, Laketown. Leaving the wounded Kili (Aidan Turner) behind, Thorin, Bilbo and the remaining dwarves make way to Erebor to face Smaug.

Martin Freeman stars as the titular hobbit, Bilbo Baggins bringing a whimsical charm and innocence to the role, an innocence that is quickly being sacrificed bit by bit with every battle and every use of his mysterious ring which can hide his presence with invincibility. In one key scene, he briefly realizes the ring’s influence after he slays a spider that stands atop the fallen treasure. “Mine” he calls out before gasping in horror at his actions. Freeman’s talent is at its best when he comes face to face with Smaug with nothing but his wit, charm and fleet feet to save him. In contrast, the film sadly has less of Gandalf the Grey (Ian McKellen) in this chapter of the trilogy as the character leaves the adventurers to explore the what is going on at Dol Guldur where he come face to face with Sauron and a growing legion of orcs. McKellen’s best scenes are with Freeman as the hobbit struggles with the decision to reveal discovering the One Ring. “What did you find?” Gandalf dramatically asks the hobbit. “My courage.” Bilbo response after a long, contemplative pause, hiding his true answer.

Some of The Hobbit: The Desolation of Smaug’s lighter, high-action moments come with the return of Orlando Bloom as Legolas who was featured prominently in The Lord of the Rings and is a fan favorite. Combined with the introduction of Evangeline Lilly as follow elven archer, Tauriel, the film gains a pair of heroes to aid the adventuring dwarves and the story mid film. Their inclusion also provides some emotional tension as Tauriel faces her place in the wood elves kingdom, her place in Legolas heart and her place in Middle-Earth as well desiring to see the world outside the forest. Tauriel becomes an interesting, captivating supporting role in film with Lilly bringing that unique charisma she exhibited in LOST. Tauriel’s plight contains the immediate effects of the story and the journey upon Middle-Earth as she has to make life affecting decisions challenging the authority of her king, leaving her forest to save and protect the dwarves on their plight and to leave Legolas to fight the orcs alone as she remains behind to save the life of a single dwarf, Kili. In a story filled with large, grand moments, events and huge character arcs, her smaller moments ring loudly in their brief screen time. Lee Pace briefly impresses as well as the cold hearted Thranduil, king of the wood-elves.

In a film titled, The Hobbit: The Desolation of Smaug, it is the dragon Smaug most audience members are anticipating and waiting for, longing to see the the creature’s reveal. As voiced by Benedict Cumberbatch, Smaug is an astonishing cinematic achievement, a beautifully rendered beast with a fully developed, orchestrated and realized personality. Smaug is beyond words, a brilliant CGI character that is jaw-droppingly amazing the instant he is revealed on screen. Once he speaks to the frightened, cornered Bilbo, the dragon becomes a rich, dynamic character in the film – a thinking, calculating, thrilling villain. He toys with the hobbit, attempting to draw out details of Bilbo’s company, story and plan. Cumberbatch emotes an arrogance and an intelligence to the dragon that makes Smaug a instant iconic creature in all of cinema. Smaug is an important element of The Hobbit and Jackson delivers, beyond expectation. 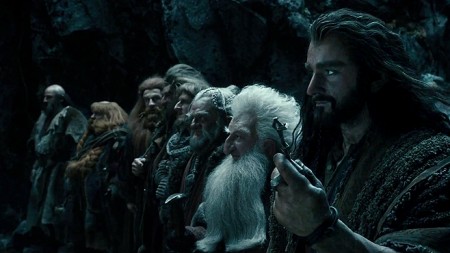 The Hobbit: The Desolation of Smaug is very similar to The Empire Strikes Back and The Hunger Games: Catching Fire being the middle story in a fantasy trilogy that is basically the second act of a larger story ending on a cliff hanger. The other films benefit from being designed as such a beast at the time of their creation while The Hobbit: The Desolation of Smaug is a product of dividing a single story. The film suffers from that manufacturing providing an uneven pace and a divisive conclusion. 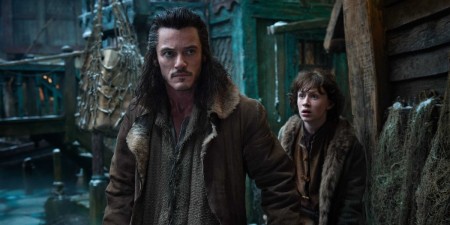 It also has to hold much of its emotional weight and character arcs to the next and final film in the trilogy leaving the film a tad dramatically hollow. Tauriel fills in the gasps some, but only as much as a supporting character can in the grander scheme of things. However, the film is a thrilling adventure, a miracle of technical achievement. It is rich and beautiful, amazing to behold bringing to life a fully realized Middle-Earth as much or perhaps more than Lord of the Rings with elves, orcs, hobbits, dwarves, wizards, humans, spiders and dragons. It succeeds in drawing its audience into its fantasy world leading them along an adventure with Bilbo, Thorin and the other 12 dwarves as they encounter challenge after challenge in their quest to recover the Archenstone from the fire-breathing dragon Smaug so that an entire race of dwarves can recover their lost homeland.