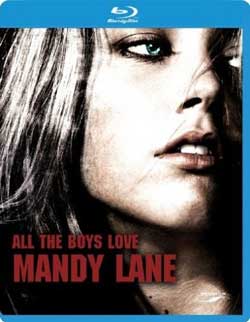 A group of high-schoolers invite Mandy Lane, a good girl who became quite hot over the summer, to a weekend party on a secluded ranch. While the festivities rage on, the number of revelers begins to drop quite mysteriously.

Created in 2006, “All the Boys Love Mandy Lane” finally arrives onto bluray almost 8 years later. This horror thriller “teen slasher” directed by Jonathan Levine stars Amber Heard in the starring role of Mandy Lane. Despite its festival run receiving mixed reviews, it was the ill-fated distribution that kept this one shelved for so many years. Reports of bankruptcy and “rights” acquirement seem to complicate matters as it was eventually bought back by the Weinstein Company. 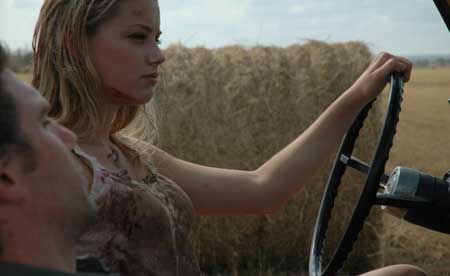 As a film it did receive accolades for some of its cinematography work, though many dubbed the film not fit for mainstream. Regardless it features a confused final act that while different does tend to feel a bit misplaced.

The story is rooted in and obliviously geared towards the teenage market with its high school antics, partying and tired “get laid” antics. To horror fans, it may at first seem a bit too cookie cutter scripted to even work for its intended audience. Amber Heard gets the front runner spot here as a young attractive high schooler who everyone seems to take extra notice of.

The script sticks with this aspect making it the center of every male teenage conversation always falling back on the “who’s gonna score first” basis. The genre end comes later feeling more forced at times than by motive. When this slaughter begins, its reasoning seems misplaced to the confusion of its viewing audience…so much that I can almost see the hoards of rolling eyes and attention span loss.

Though in the spirit of reviews, “All the Boys Love Mandy Lane” does a have rather typical plot. Mandy Lane who has the attention of every boy in school is invited to a weekend ranch party with a new group of friends (most of whom want to sleep with her). The invitation comes from an earlier fallout during the school year that ends in tragedy for a high school jock who takes on a foolish dare. Again, the motivation here is …..”getting with” Mandy Lane. 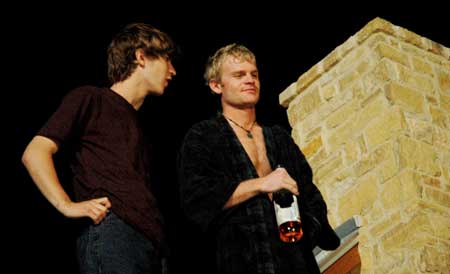 Mandy who “was” best friends with Emmet (Michael Welch) besides its best to distance herself from him after the event. Emmet, as it appears has been left behind for new friends.

As the film moves onto its next act, the group of 3 boys and 3 girls head to a ranch getaway (that is being monitored by hired ranch hand, Garth). Red, the ranch owner’s son has the place to himself which seems perfect for a weekend of drinking, swimming and hormonal conquest. The group consists of Mandy, Chloe, Red, Bird, Jake and Marlin. The dynamics here are pretty typical with the usual “over anxious few” and the “emotional others” rounded off by party heavy, Red. 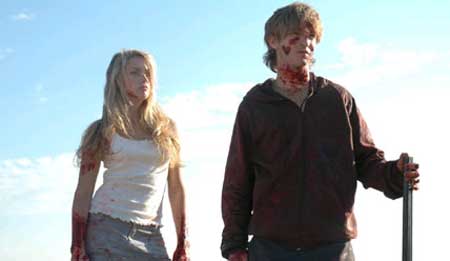 As things get underway, the body count begins to pile up. The group grows smaller as a hooded killer lurks in the shadows. While attempting to appeal to the “Friday the 13th” routine, it soon become clear that something feels “really” absent from the premise of this film. 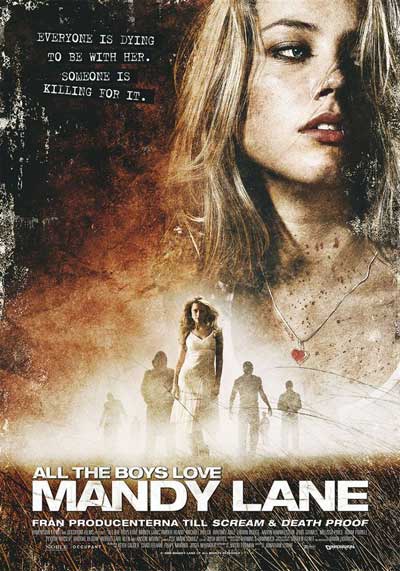 Mandy becomes that much more of a confused character while subjecting the film’s viewers to a mix of bait and switch. The movie itself is shot well and directed with a professional hand while leaving us scratching our heads as to what went wrong here that those same professionals didn’t anticipate from within its teetering script. “All the Boys Love Mandy Lane” was a bit a of a let down for me, especially since I waited 8 years later to finally watch it. Though, don’t let that stop you from a curious one-off as it still is a professional product with some interesting qualities. A few which might be as basic as several scenes of Amber Heard jogging towards the camera.

All the Boys Love Mandy Lane is now available on bluray