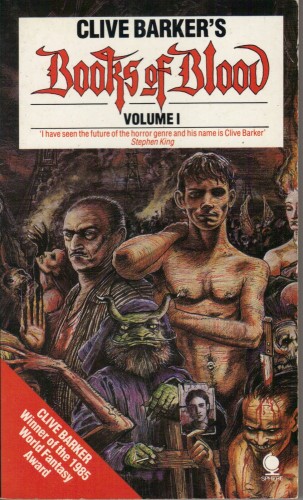 The Book of Blood: An imposter posing as a psychic medium learns the hard way that the dead don’t appreciate being taunted.

The Midnight Meat Train: Leon’s new beginning in the city that never sleeps comes at a dyer price upon meeting the notorious butcher.

The Yattering and Jack: Jack Polo’s indifference to life’s consequences has the very minions of hell reeling with dismay.

Sex, Death and Starshine: A theatre production company learns the true meaning behind the cliché the show must go on, even beyond death.

In the Hills, the Cities: A bickering couple sees a side of eastern Europe where even the depths of misery run red.

Whether you’re oblivious to Hellraiser, Candyman or countless other spell binding works in literature or film through Clive Barker or an avid die hard, the Books of Blood collection is unanimously his most sought after efforts. There truly is no mystery as to why. Within the pages of each volume one through six there is something for everyone. Be forewarned: the unprecedented grisly imagination and ability to depict even the most depraved of souls is not for the faint of heart. Make no mistake about it, this anthology will prey upon your most carnal of fears while at the same time tapping into an unchartered inner sanctum of our subconscious.

The central theme of blood, a symbol of life and therefore expulsion thereof in the horror genre may appear on the surface as a little simplistic or redundant. A closer look will reveal that the concept is quite ingenious really as each tale spawns a presence of macabre making each tale stand on its own yet having a common thread of unease makes this a most intriguing read.

Barker’s voice and prose is truly one of a kind. His message appeals to a commercial audience but is very poetic and literary in nature. It doesn’t come across as pretentious or condescending as many literary endeavors can be. I challenge even the most cynical of readers to embark upon the works of this author without being utterly spell bound in the diction alone.

The diabolical descriptions of mayhem and death are unprecedented and disturbing. It’s no surprise that author Barker used to attend autopsies for inspiration as reflected in his writing. In many cases the sheer shock value forces the reader to digest once again what they’d just consumed in a physiological struggle to comprehend what they’d just experienced. It’s very rare to read any works of Clive Barker merely once. The author has an uncanny talent in persuading the reader to embark upon a journey of darkness most lack the bravery to explore on their own.

A wide range of unusual characters from Leon, the cynical, hopeless romantic in New York along the meat train to a former police officer Redman resilient in finding answers within the pages of Pig Blood Blues to the couple engulfed In The Hills, The Cities are each unapologetically controversial. They’re cut from a different cloth as different as Barker himself but somehow it caters to the readers in a special way. Exploiting the alienation or isolation within ourselves we delve further into the psyche of the characters in a perpetual struggle to fit in, in a very unfair society.

The climax of each tale is unpredictable and exhilarating, not at all your typical Hollywood ending. This is no surprise as to see the demand for additional five volumes to these anthologies forever cementing the validity and influence of Clive Barker into the realm of horror.