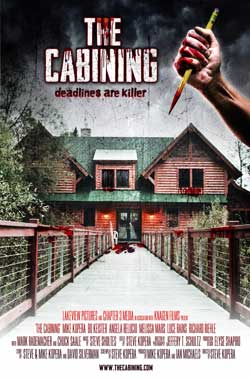 Todd and Bruce, a hapless horror screenwriting duo, head to a remote artists’ retreat seeking inspiration. Instead, they find death and deception, as, one by one, the other artists get knocked off, each in a more gruesome way than the last. The morbid atmosphere proves perfect for Todd’s writing, but will he live to finish the script?

For a comedy film to be successful it must be funny, or at the very least passably amusing. For a horror film to be successful it must be scary, or at the very least tense or uncomfortable. For a comedy-horror film the team behind the production must competently combine these elements. This may all sound very basic and simplistically obvious but it is probably the single hardest thing to do in filmmaking. The Cabining from Mike and Steve Kopera attempts to find this elusive balance and unfortunately doesn’t succeed very well. 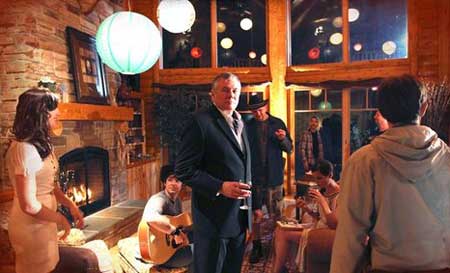 Todd (Mike Kopera) and Bruce (Bo Keister) are friends, roommates and a screenwriting team of little or no ability. Desperate to come up with a horror film script of straight-to-DVD quality they attend a relevant class where their ideas are quickly and offensively dismissed as generic and dull. In an attempt to generate inspiration Bruce spends their overdue rent money on booking the pair into an idyllically serene artists retreat as they have been given a two week deadline to come up with something by Todd’s wealthy uncle before all hope of investment is withdrawn. Fairly soon after they arrive at Shangi-La the other guests begin to experience seemingly accidental, and fatal, accidents which the pair use as inspiration for the script.

There are many problems with The Cabining, the worst of which are that this isn’t particularly scary, tense or funny. There is the odd, desperate, and possibly unplanned, moment of humour but nothing remotely witty or original enough to raise the ploddingly dull concept above its base level. This is a film dreamt up by people who have obviously watched many horror films but instead of taking inspiration from them and paying homage to the ideas and themes have simply exaggerated various horror tropes in search of humour. The characters are stereotypes of the worst kind, from the mysterious stranger who wanders around with various tools and implements to the stupid police detective who always arrives just a little too late. The leads are just irritating for the most part and the impression is that Kopera and Keister are playing extreme versions of themselves with little conviction.

The idea of an isolated retreat, cabin or location is as common as a group of horny teenagers in the horror movie genre and recent films such as Cabin In The Woods have proven that there is still originality down these well worn paths but The Cabining is a poor attempt. One of the ways Cabin In The Woods is successful is that it manages to create humour and interest in the fear inherent in the characters. Many times, in real life and in film, an uncomfortable, and relief laden laugh follows quickly on the heels of a fright. With this film there is so little dread or empathy that the lead character’s dismissal of their companions deaths seemingly at the hands of an unknown serial killer simply presses them on in writing their script rather than either abandoning the retreat altogether or at least barricading themselves in. The fact that this is played for humour doesn’t work due to the flippancy of their actions and is barely worth a raised eyebrow from an audience. 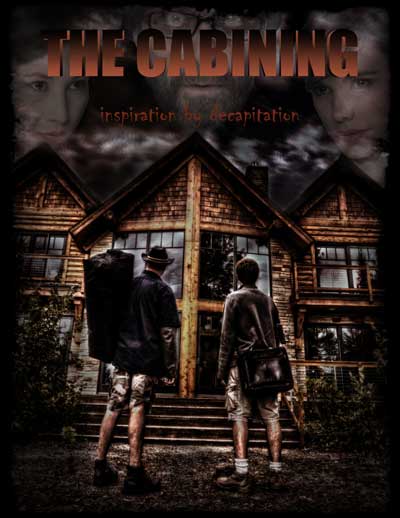 Ultimately The Cabining is a poor film. It is a dull production that seems to be trying desperately to cash in on recent genre successes but is not nearly as clever as it thinks it is. There is nothing here for the discerning horror fan or more transient viewer. The humour falls flat, the scares are non-existent and in the end it is a little bit annoying. It is a film made for the wrong reasons and should be avoided. 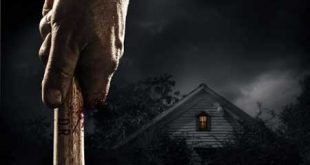