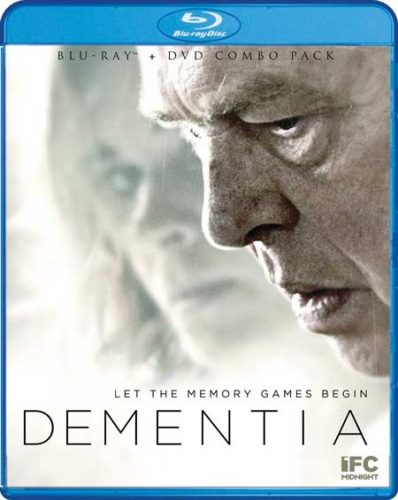 After being diagnosed with Dementia, an elderly war veteran is forced by his estranged family to hire a live-in nurse, only to find she harbors a sinister secret.

Dementia is a 2015 psychological horror movie that showcases some great acting. The story is okay but contains characters that are both interesting and flawed. The story occasionally requires some suspension of disbelief to make it function for the viewer. There were also a few technical aspects that made the film difficult to watch, but despite the minor flaws, it is a good movie that shows talent of all the individuals involved.

George Lockhart, played by Gene Jones, is an elderly Vietnam vet. One day he suffers a stroke and is told by doctors that he suffers from dementia. A nurse visits his home while George is recovering and George’s son and granddaughter hire her to stay and assist. The nurse is a young woman named Michelle, played by Kristina Klebe, who takes advantage of George’s health problems to exact a sinister revenge plot. George’s granddaughter, played Hassie Harrison, thinks something is amiss and investigates.

The acting for this movie is really well done. Gene Jones, Kristina Klebe, and Hassie Harrison give standout performances. Gene Jones is great at displaying his range from sad and vulnerable to enraged and sinister.  Kristina Klebe goes from sweet and caring to sinister and menacing in a very believable fashion. Hassie Harrison’s character has the most obvious character arc, going from uncaring to caring and then disillusioned. The casting is great and other characters really fit well into their roles, making the central figures to the story seem better rounded. The film seems to have elements of What Ever Happened to Baby Jane? with twists that make it subtly unique.

There are a few technical aspects that made this film difficult to watch. The night shots are almost too dark at times making the movie difficult to see. The soundtrack is eerie but is also so loud at times that the dialogue is difficult to make out what is being said. The rest of the film is really well made and shows a great deal of skill in making some of the nightmarish qualities come together perfectly.

The story seemed like it could have been developed in more detail. I am not a fan of killing an animal character to make the antagonist seem truly evil. The movie carries the plot in a natural flow but the revelations at the conclusion make it feel a bit rushed. It also felt like the conclusion felt hollow. This was due to the fact that throughout the film we are watching the granddaughter and George become closer through their ordeal and then it is essentially destroyed when you find out the dark secret that ties Michelle to George. On the plus side, the revelation is subtle and there are clues all over to point to it so it does not come off something completely out of left field. The actors at least seemed to take their roles seriously and their range of skills is put to the test.

A person being tormented by their caretaker is not a particularly new plot development. Dementia at least takes this aspect and adds enough unique qualities that the movie does not come off as rote. Most of the characters seem to have a solid arc that make the movie thrilling at times.  The revenge motivation is a bit muddled but it fits enough that it does not come off like a M. Night Shyamalan style twist. The bottom line is that the story seems to say that all people pay the price for their misdeeds in the end.

Dementia is worth looking into if you are looking for something different. The solid acting is entertaining and very real given the rough trip the story takes you on. It is a dark movie about a dark subject matter and the mood is appropriate to the tone of the film. The aspects to this move that are flawed are fairly minimal and the high points of the acting really make this movie stick out.

Dementia is available on bluray per Shout Factory