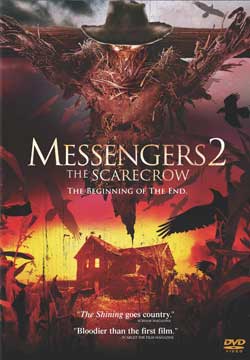 John Rollins is a good man who only wishes to take care of his family. His luck is down however because his farm is about to be foreclosed and there isn’t any future to his crop. That all is about to change, you see John found a scarecrow in his work shed. Suddenly everything is starting to go much better, or is it?

“You planted the seed, now reap your reward!”

The Messengers 2: The Scarecrow is a prequel to the 2007 film The Messengers. The viewer however doesn’t need to be familiar with the first film; this film does stand on its own. Before the film starts during the credits we are treated to a scene of a nubile young woman running through a corn field holding a book to her chest. She is being chased by an unseen assailant who only seems to be dragging a scythe behind them. She is stabbed with the scythe of course and the credits end and the real story begins.

The story begins with a simple farmer named John Rollins. He seems upset as he tries to take care of his dried up cornfield. What isn’t dried up by the scorching sun however is eaten by crows. John struggles with himself trying to be a good husband to his wife Mary and their two children.

John is a proud man, and as he takes his daughter into town to purchase supplies he discovers that he no longer has credit at the store. The bills are piling up and it just doesn’t appear that any rain is going to come to save his crop. Suddenly as if a prayer was answered John finds a scarecrow inside of his work shed. His son makes it quite obvious that he doesn’t like the scarecrow; in fact he is almost terrified of it. John talks to his son and assures him that he will get rid of it. An elderly man named Jude comes to visit John bringing with him a six pack of beer, we all know during hard times what good an ice cold beer can do. Jude admires the scarecrow and informs John that he should put it up.

John takes Jude’s advice, much to the dismay of his son; however good things do begin to happen around the farm. First all of the crows that have been devouring John’s farm, well they are all dead. Their corpses are littered all over the field. As John begins to pick up and burn the carcasses of the birds (I can’t even begin to imagine what that would smell like) a representative from the bank shows up. The representative is a snobby man who wants John to sell his land; he has an offer after all that would allow John to walk away with his family debt free. 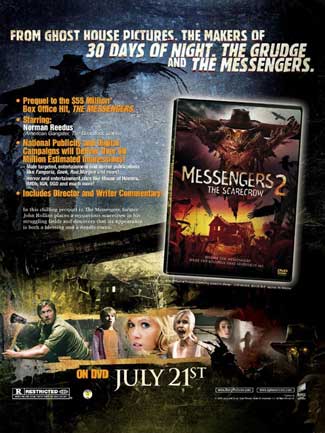 John isn’t interested though, he sends the banker on his way when suddenly his irrigation system starts running again. While all of his water is pumping everywhere John notices a nubile young woman who seems to be stripping in the sprinkler (yes it’s the same beauty that was running during the opening credits). Turned on by this the once sweet and passionate John quickly runs inside grabbing Mary on his way and begins to force himself upon her.

That night the same nasty banker type is on the outskirts of the field putting up a foreclosure sign. He is talking on his phone when he suddenly is startled. It isn’t long before an eighteen wheeler speeds by running the banker over and leaving only a bloody smear on the side of the road.

The next morning John begins to find money and the bankers “nice watch” in his field. Not only is the scarecrow taking care of his problems, it is leaving him rewards. Now he can afford the things necessary for his harvest to bloom, and things are finally going right for his family, or are they.

The Messengers 2: The Scarecrow is a break from the torture p*rn that seems to have invaded the horror industry; besides the above mentioned smear on the street we only get to see a hellish splinter wound. Instead it is a supernatural thriller that I found very similar to the Amityville Horror. I must admit I was actually pleased with the film, the pacing wasn’t too slow or too fast and it had a lot of buildup. As far as the scares go, there are some jump scenes here and there that might get the unseasoned watcher. However the film actually isn’t that bad and I would recommend a rental especially if you are a fan of the first film and want to know how it all started in the first place.