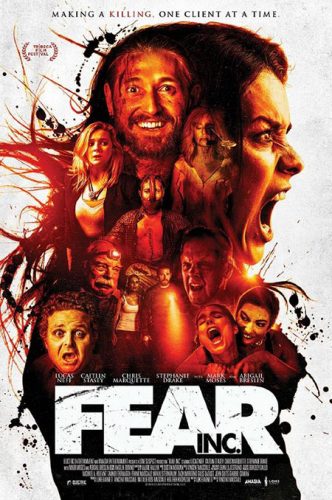 When it comes to horror movies, Joe Foster has seen it all; jaded and bored by the common fair, he’s looking for something with a little more edge and a tad more bite; unluckily for him and his friends, he’s about to be punked in a very unpleasant way.

In Fear, Inc., Halloween just doesn’t cut it anymore for Joe Foster, played by Lucas Neff, an all-things horror zealot on the lookout for scary thrills. He’s seen every horror film, and he’s been to every haunted attraction under the blood-drenched moon; as a result, he’s a bit world-weary when it comes to goosebumps and spine-tinglings. 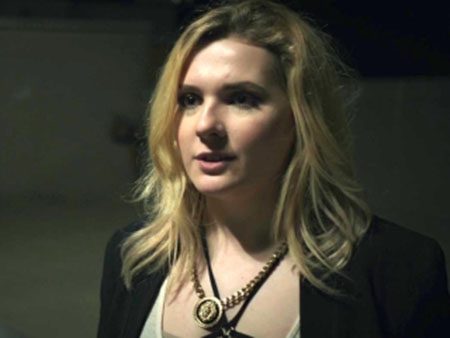 This Halloween, nothing’s capturing the creeps he originally felt back in the day when he first saw Jason wield his mighty machete at Camp Crystal Lake, witnessed Freddy oil his razor-sharp ticklers on sleeping teenage beauties, and gawked at Jigsaw piecing together his deconstructing puzzles. Nothing’s getting the old blood pumping like it used to, not even the annoying pranks he’s playing on his girlfriend, Lindsey (Caitlin Stacey), and their best friends, Ben (Chris Marquette) and Ashleigh (Stephanie Drake).

Joe’s boredom, however, is about to die out; after attending another predictable, humdrum haunted house with Lindsey, an odd little man named Tom (Patrick Renna) over-hears him grumbling about the lack of scares in the attraction; agreeing with Joe, Tom hands over a business card, telling Joe, if he wants some real terror, he should call the number on the card. Both Joe and Lindsey pass it off as a bit of Halloween kookiness from a disgruntled loser who was hired by the attraction to scare little kids. After mentioning the encounter to Ben and Ashleigh back at the house, Ben jumps in and tells everyone he’s heard of Fear, Inc. before, and that the company isn’t legit; the people running it are crazy, and he warns Joe not to call them. Of course, Joe can’t pass it up, and he makes the call which necessarily leads to all kinds of regrettable mayhem.

The acting in this fluffy little homage to 80’s slasher movies, Torture Porn gorefests from the 2000’s, and a very particular Michael Douglas thriller from the 90’s (which shall go unnamed) is at times adequate and at other times embarrassing. Lucas Neff’s obnoxious portrayal of Joe is appropriately insufferable yet emanating a certain low level of slacker charm; unfortunately, his conviction waivers throughout, presenting Joe realistically at times and cartoonishly unbelievable at others. Caitlin Stacey’s depiction of Lindsey is a bit off-putting due to her odd accent; although a native Australian, her inflections seem to be of some undefined middle-European origin, which creates distraction rather than believability, making her performance unconvincing. Chris Marquette as Ben and Stephanie Drake as Ashleigh put in noble efforts, but for the most part, the script only allows them an over-wrought energy and artificial delivery.

Luke Barnett’s script feels as though it’s struggling with itself; it seems as though it can’t commit to its premises, either as a horror film, a comedy film or a horror comedy film. Having come from, and having been heavily influenced by, Will Ferrell’s desultory Funny or Die website, Luke has written a movie that’s highly suggestive of an aimless SNL skit that thinks it’s being smart but is really doing nothing more than going off the rails and not realizing it. His effort seems extremely shallow in comparison to better made meta-trope referencing horror movies like Wes Craven’s Scream or his less-affective New Nightmare; and it does no service to the previously mentioned Michael Douglas movie, of which it tries so desperately to attach itself.

At times, Fear, Inc. does manage a few uncomfortable experiences and a couple of genuine moments of tension, but those good elements are offset by flaccid follow-through in other areas and an erratic sense of direction throughout. The movie repeatedly drops the ball in terms of solid, consistent scares, instead relying on a monotonous dum-dum-dum-dum rhythm in its narrative structure, rather than a dum-dum-DUM-dum rhythm which would accentuate the mounting pressure leading to the required release in more tense scenes; this only diminishes the effectiveness of the movie, both as a parody and a horror film. It could have all been dealt with in the editing room by editors Shane O’Connor and Brent Shafer, but it appears no one in charge had a real sense of tempo. This one’s only for the diehard horror junkies and those who mistakenly think Saturday Night Live is astute.