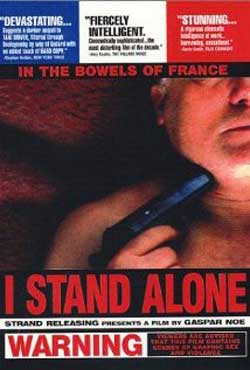 A horse meat butcher’s life and mind begins to breakdown as he lashes out against various factions of society while attempting to reconnect with his estranged daughter.

The fact that the tagline to I Stand Alone is “In the bowels of France” should tell you something about this film. The fact that the standard cover of the movie is a close-up picture of a guy holding a gun to his own chin just above a bold-faced “Warning” should also help set the mood for what to expect. But the fact that it is written and directed by Gaspar Noe (see also Irreversible and Enter The Void) puts the final nail in the coffin, eliminating any confusion as to what is in store for the next eighty-nine minutes of your life. Disturbing, dark storylines and beautiful imagery and filming are two constants of Noe’s films, and I Stand Alone is no exception.

The movie begins with the word “Morality” slammed onto the screen, and a couple of guys at a bar discussing how it’s something only for the rich. After the word “Justice” slams similarly against the screen, one of the guys pulls out and a gun and explains that when the police attempt to enforce “their” morality, the gun stands for justice. These characters go away, and we get a narrated backstory, complete with photo stills, of the events of our main character’s life, starting at his birth. His mother left at age 2, his father, whom he never knew, was killed in a German camp. He was molested by a teacher at a young age. 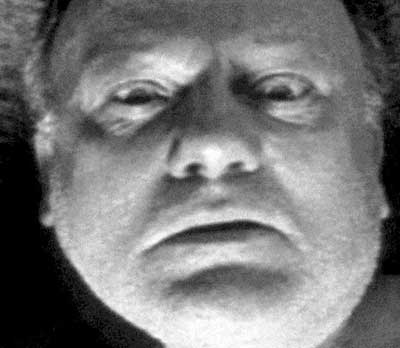 Became a butcher at fourteen, by thirty had his own shop. Had a baby with a girl who then split, forced to raise his mute daughter alone. When a misunderstanding led to his attack on a man, he is sent to jail and his daughter to an institution. He loses his store. He gets out, meets and impregnates a woman he works for at a bar, then moves with her to her mother’s apartment while he waits for her to buy him a new shop, all the while attempting to forget his old life. Which brings us to the present, with our protagonist, nameless but for the title the butcher (Philippe Nahon, who introduces the character in Noe’s short film Carne, reprises the role briefly in the even more disturbing Irreversible, and also plays the truck driving killer in High Tension), declaring that today he is starting over.

I Stand Alone is not a horror movie in any traditional sense. There are no monsters, no serial killers on the loose, no teenagers stranded with only their dead cell phones and their raging hormones. But it is a very unsettling, very disturbing, and very very dark film focusing on the slow breakdown of a working class citizen, both mental and physical, and the depths his life manages to fall into. He hates everything, feels alone (so says the title), feels like a stranger everywhere. It’s the government’s fault, his daughter’s fault, his ex-girlfriend’s fault, his current girlfriend’s fault, his unborn baby’s fault. He is nearly fifty years old, and nothing has gone the way he would hope it would. And no he has gotten to the breaking point. He used to own his own shop, now he relies on a woman he doesn’t love to give him financial assistance. There is a scene where he starts a job at a deli, and his much younger boss condescends him and tells him to smile more. When he doesn’t, he gets fired, only to lead to further verbal abuse by his pregnant girlfriend. He ends up taking a job as a night watchman at a rest home for the elderly as it gets him away from home and is no worse than prison.

The action of the story all begins when the butcher helps a young nurse home after they both together witness a patient’s death. He stops for a drink afterward, which turns into a few, then ends up at an adult theater (complete with an uncensored adult film on the screen). When he gets home late, his girlfriend berates him, says her friend saw him with another woman. The verbal argument becomes physical, and suddenly he is punching her full in the stomach. He leaves quickly after stealing her mother’s gun and heads back toward Paris. Things only devolve from there as his lack of money is only outweighed by his lack of happiness.

I Stand Alone is so dark and so depressing, it can be hard to watch. It touches on many issues that many of us find ourselves face to face with as we get older, dissatisfaction with our jobs, our positions in life, our employment, but of course shows these issues dealt with via a (presumably) different approach than we would take. Noe manages to create in the butcher an anti-hero that we feel for and wish different circumstances for while at the same time hate for his vile actions and despicable abuse.

To watch his mental breakdown unfold is horrifying. Adding Noe’s camera work, the pounding quick zooms that often accompany the butcher’s internal rants, the viewer will often feel unsettled. As the film progresses, much like the more valiant Taxi Driver or the more generic Falling Down, things continue to get worse, and we begin to worry just how far the movie will push us. The butcher decides, before enacting a plan of violence, revenge, and ultimately suicide, to visit his daughter (Blandine Lenoir) and say good-bye. He picks her up and brings her not to the Eiffel Tower as promised, but back to his sleazy hotel room. And then we get the on screen warning. We get a countdown, along with the words “You have 30 seconds to leave the screening of this film.” It’s an old shock tactic, much as Last House on the Left reminded you that “it’s only a movie,” but there is definitely a reason for this warning.

I Stand Alone is an amazing yet horrifying piece of French cinema. It won multiple awards for its story and acting at Cannes Film Festival and many others. It will leave you both disturbed and wanting more. But after all is said and done, it really is a brilliant film. It is not a movie to go into lightly, nor is it for the casual horror fan. Consider this my 30 seconds of warning before seeing the movie: the things the butcher does, while not so gory, are far more disturbing than most anything that might be seen in a typical slasher film. 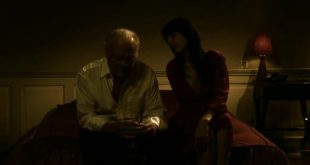