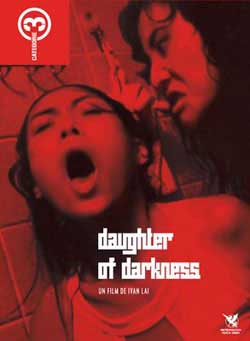 Police suspect a young teenager who was horrifically abused by her family and raped by her father of finally snapping and slaughtering them all.

DAUGHTER OF DARKNESS
Director: Kai Ming Lai
Writer: Kai Ming Lai
Actors: Yuk – Kwan Chan * Pia Chin * Lily Chung – Kai – Kui Ho * Hugo Ng * Tony Wong
My big movie date is tonight! For a comic book and horror/exploitation/ cult movie nerd I really suprise myself at the level of hotties I am able to pull. Yeah, I been with some real dogs too but for the most part I been with some amazingly pretty gals! And my movie date is smokin’ hott! Yes, hott with two t’s! And she’s kind of intimidating and I know when we are at the movies people are going to look at us and shout, ” Oh man, look at that pretty girl with that ugly dude! ” And I am cool with that, I’m cool with it. But I need your psychic support to make me as charming as possible to this wonderful gal. And we we are going to see the EXPENDABLES, so wish me luck! Oh yeah, I am reviewing DAUGHTER OF DARKNESS not my lovelife. Because DAUGHTER OF DARKNESS is much more interesting than my dating history. No, it really is. Again here is another Hong Kong movie that is not a horror movie but in the case of DAUGHTER OF DARKNESS it doesn’t really matter because this is one sick ass flick! I think it’s really good and if you are nose deep into these horror and exploitation movies you will like DAUGHTER OF DARKNESS also.

The opening scene is of a young lady in a prison cell being taking out of the cell resisiting as she tries to take a little make up box with her and suceeds in only dropping the box and taking a shard of the broken mirror with her. From there it goes on to follow a cop and his new young female partner/trainee and how they are investigating the murders of four family members and trying to get info from the only survivor of the massacre, one of the daughters named Fong. The main cop is a real pervert, he feels up a dead body floating in the tub, ( in his defense the corpse is pretty hot ) and when he and his young partner, who looks like the Hong Kong version of Thelma from Scooby Doo, re-enact the murders he tries to feel her up and it looks like he is really trying to choke her and overpower her so he can rape her! But she is able to fight him off.

There is also a part where a forensics photographer is taking pictures of the bodies and the cop hoists one of the victims up and holds it next to him posing for a picture! What the hell is going on in this movie!?!? At this point, which is still very early on in the movie, I didn’t know where DAUGHTER OF DARKNESS was going. It did seem like a police procedural, like a episode of CSI or Law & Order but I thought it was going to be a black comedy. Because there is another scene where he is questioning a movie theatre owner and tell the owner that since he is showing action movies and some of the victims were shot there must be a connection to him and the killings! What?!?! And the movie theatre owner is also a pimp! Or as the subtitles read: A pimper! And the subtitles are badly translated but read really funny!  Here is a example of just some of the funny lines in this wacky film:

” Do you think the corpse will tell you everything? “
” Even the dead look is beutiful. “
” How do you know my wifes underpants can cure cold? “
” If she returns we can have a three mans game.”
” Tell me who did it and I will chop him dead!’

There is other stupid humor in here and for the first fifteen minutes or so this flick tries to be funny in a stupid and sexist way but as it progresses and the police try to determine what happened and who the murderer is DAUGHTER OF DARKNESS does indeed take a darker turn.  The only survivor, Fong, has a boyfriend who is a cop and he tries to confess to the murders but after a few moments of questioning it is obvious that he did not do it and that he is covering up for Fong and that Fong has a lot of explaining to do. I will say at first I was a little dissapointed that much like INTRUDER and BLUE JEAN MONSTER that DAUGHTER OF DARKNESS was not a all out horror movie but as Fong began to reveal her story it gets very interesting. Turns out that Fongs Mom, Dad, brother, and sister are total assholes to her and her Dad is the biggest prick of them all! They yell and curse at her and they try and take away a gift her boyfriend had given her. In a scene before this her and her boyfriend are walking down a lonely street at night and they happen to catch her father wit a hooker in an abandoned building and they get into a arguement and the Dad slaps Fong. I like scenes like this in movies though, when people are yelling and overacting and hamming it up because it’s always fun to watch people fighting! Dad also brings hookers home and he even peeps on Fong when she is taking a shower and in a drunken and horny stupor he rapes Fong, rapes his own daughter! And it’s a somewhat graphic rape and pretty repulsive and really makes you hate this bastard and i couldn’t wait to see him die! He even takes photos of her naked! What a maniac! His wife comes home from a date with another man and finds Fong all raped and crying and I was suprised that she believed Fong and did not blame her for getting raped and she does confront her husband but quickly forgives him and then they have sex!!

Finally at the end we get the murder scenes I had been eagerly awaiting  and it was worth the wait! Usually in a movie where everything is a buildup to the end and we get the gory payoff I do not enjoy it as much, because I like my gore and sex and violence sprinkled in heaps throughout the movie but for DAUGHTER OF DARKNESS I was into the movie, I was with it, and when the killing finally starts I didn’t think, ” Finally, somethings happening. ” or I did not feel a sense of relief that the movie was finally going to end. And the murders are really good, gory violent fun for all! We get crotch shootings, a drowning, back stabbing and the actress who plays Fong does a good job of changing from a hapless victin to a gun toting, knife wielding mistress of mayhem and murder taking revenge on her tormenters! She convinced me that she had been pushed over the edge and that the only thing that made sense to her was to kill everybody in sight! Except her boyfriend of course. In doing research for DAUGHTER OF DARKNESS I founf out that the actress who played Fong, Lily Chung, was also in RED TO KILL, and I hear that movie is just as depraved, if not moreso than DAUGHTER OF DARKNESS and now I really want to see that one too!

For a cat III movie DAUGHTER OF DARKNESS has alot of sex and nudity, so much it reminds me of a Takashi Miike film, it’s pretty perverted and even shows pubic hair which I thought grossed out Asian folks. And the ending is a real downer but I also hear there is a sequel but you should really check this flick out. If you are a real film fan and don’t care if a film is foreign, subbed, dubbed, or low budget ( and if you did care about stuff like that you probably wouldn’t be checking out this site ) you will enjoy DAUGHTER OF DARKNESS. But you are one sick bastard if you do….like me!