A bacteriological weapon developed by the US Government to create a super soldier – spreads an epidemic in a quiet little town in the middle of Eastern Europe. All citizens have been turned into infected zombies. The plan is to bring an atomic bomb into the city’s nuclear plant to pretend a terrible accident occurred. No one has to know the truth. A team of mercenaries is hired to complete the mission. The battle is on. Hordes of monsters against the team. WHO WILL SURVIVE?

There are just far too many zombie flicks coming out these days. Very few are of any value and the vast majority are just so bad, you wish you hadn’t wasted your time. Sometimes you start watching a movie, and just because you started to watch it, you feel obligated to finish it. It happens often and many low budget horror films fall into this category. That thought pops up in your head, the one that keeps saying over and over, “Can it get any worse?”. Zombie Massacre (also known as Apocalypse Z) starts out strong but quickly turns into a turd within a matter of minutes. Some folks might have expected it to be bad just because the name Uwe Boll was associated with it. I had the opposite reaction, I like Boll, but this one was just not meant to be, despite the fact that it had several things going for it.

When an average woman comes home from work to tend to her elderly father, things get bizarre and she becomes infected with a virus that turns her into a zombie like creature. We soon see this is just the beginning of an epidemic which is about to take over the small Eastern European town. The American military is responsible for the outbreak and need to contain it before it spreads further.

They call in four people who they know will get the job done. Enter Jack Stone (Christian Boeving), an Iraq War vet who they spring him from a military prison, offering to wipe his slate clean as well as reunite him with his young daughter. The rest of his team is Mad Dog (Mike Mitchell), Dragan (Daniel Vivian), and Eden (Tara Cardinal). Each of them have their own specialty and are ready of action. With the promise of an exceptionally large payday, they set off to the quarantined town to detonate a nuke that will wipe everything out. Once inside, they realize they were double crossed by the government and are on their own to escape and get a safe distance away before the bomb explodes.

Zombie Massacre has a few moments that are really solid. When the movie opens, the effects work looks fantastic and the initial setup of the plot is a great idea. It feels a bit like The Dirty Dozen the way things play out (I guess it would be quarter dozen here), which is a cool concept for a zombie film. Once the soldiers are unleashed into the town though, things go south quickly with an overload of silly dialogue and poorly choreographed action scenes. The character of Eden, played by the lovely Tara Cardinal, prefers to use swords and is a supposed martial arts expert, but the fight scenes are barely passable. The film also suffers for its lack of focus on a tone. It’s sort of funny and sort of serious mixed with action. It’s never scary or really attempts to be but I was never sure if it was meant to be funny or to take it serious.

I did however enjoy the cast. Each of them have a unique quality which may keep many viewers tuned into the film. There’s also some interesting camera work and a cool sequence that was done using first-person. The visual effects look good and some of the zombie make-up is fantastic. The full-suit creature in the film also has a great look to it and gives it a throwback feeling to the classic monster movies we grew up on. 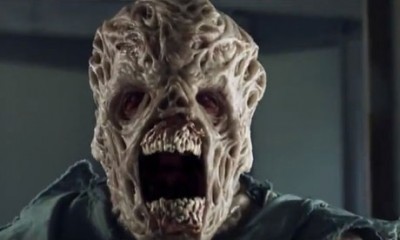 In no way is Zombie Massacre a good film, it takes far too many missteps for that, but it does show promise from filmmakers Luca Boni and Marco Ristori (who previously collaborated on the film Eaters). I’m not going to come right out and recommend it, but I will say it has some interesting moments and had they captured the essence of either the opening sequence or the end sequence, they may have had a cult gem on their hands. As it stands, Zombie Massacre is just OK. (**1/2 out of 5)