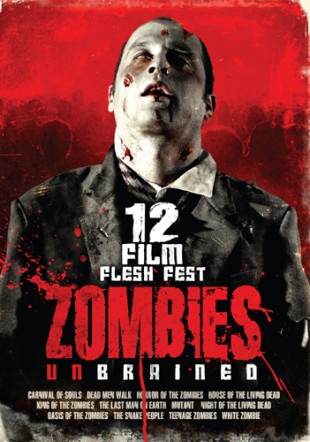 A 12 pack of zombie galore! Folks, it is a mix of zombie films and those of the unliving, in case the rather cool cover confused you. Though don’t let that discourage you as there are some legitimate gems on this collection. “Carnival of Souls” is an old favorite (that should be experienced at least once by every horror fan). “The Last Man on Earth” is an old Vincent Price classic that mixes the genre of vampires and zombies. While “Night of the Living Dead” is pretty much found in every multi film pack these days, that is not to say that you shouldn’t pick it up whether solo or packaged.

“White Zombie” another classic, while “Oasis of the Zombies” was one that literally put me to sleep.  For the record, films that bring on a lethargic sensation have been used from time to time to assist in those late “insomniac” hours.

From the listings, it looks like most on here are of the old school horror markets, but with names like Vincent Price, Boris Karloff and Bela Lugosi on the roster, you really can’t go wrong. Undead, zombies, unliving…take your pick… there has never been quite a fascination with the dead as there is today. Pick this one up from the fine folks at Mill Creek Entertainment!

Carnival of Souls
Starring Candace Hilligoss, Frances Feist, Sydney Berger
(1962) – B&W – 91 Minutes – Not Rated
What is happening to Mary Henry? The answers reside in an old, deserted pavilion where an otherworldly carnival is taking place in her honor. It is here that Mary will learn what nightmare awaits within.

Dead Men Walk
Starring George Zucco, Dwight Frye, Mary Carlisle
(1943) – B&W – 63 Minutes Not Rated
Dr. Lloyd Clayton attends the funeral of his twin brother Elwyn, a diabolical sorcerer, after murdering him in a desperate act of self-defense. Yet Elwyn isn’t ready for the hereafter and comes back to life as a twisted vampire.

Horror of the Zombies
Starring Maria Perschy, Jack Taylor, Barbara Rey
(1974) – Color – 89 Minutes – Rated R
A yachtsman and his group are searching for missing women when they come across a fog-enshrouded ship. Aboard the ship are the undead legions of the Knights Templar, who are cursed to roam the Earth to plague the living.

House of the Living Dead
Starring Mark Burns, Shirley Anne Field, Bill Flynn
(1973) – Color – 87 Minutes – Rated PG
On a South African plantation, a maniac is on the loose, first killing the estate’s animals, then starting on the human members.

King of the Zombies
Starring Dick Purcell, John Archer, Mantan Moreland
(1941) – B&W – 67 Minutes – Not Rated
When an American admiral goes missing in the Caribbean, two special agents are dispatched to rescue him. But the two suddenly find themselves on an island surrounded by voodoo-practicing zombies.

The Last Man on Earth
Starring Vincent Price, Franca Bettoia, Emma Danieli
(1960) – B&W – 86 Minutes – Not Rated
Price plays the sole survivor of a lethal virus that transforms all other humans into vampire-like zombies. He fights them nightly, until, desperately lonely and at the end of his rope, he makes a startling discovery.

Night of the Living Dead
Starring Judith O’Dea, Duane Jones, Karl Hardman
(1968) – B&W – 96 Minutes – Not Rated
Johnny and Barbara visit their father’s grave in a small town in Pennsylvania, where a re-animated zombie kills Johnny. Barbara escapes to a remote farmhouse where a cross-section of the local citizenry is hiding out.

Oasis of the Zombies
Starring Manuel Gelin, France Jordan, Jeff Montgomery
(1981) – Color – 82 Minutes – Not Rated
During World War II, a platoon of German soldiers are attacked by Allied forces. Fifty years later, the son of the only surviving Allied attacker goes on a historic adventure only to discover horrifying Nazi zombies.

The Snake People
Starring Boris Karloff, Julissa, Carlos East
(1968) – Color – 90 Minutes – Not Rated
The inhabitants of a small, remote island have been practicing voodoo for years but life on the island is starting to change when blue-faced, snake-liked zombies are beginning to feast on the villagers.

Teenage Zombies
Starring Don Sullivan, Katherine Victor, Steve Conte
(1959) – B&W – 73 Minutes – Not Rated
A group of teenagers becomes stranded upon an island, through the manipulations of a foreign scientist conducting experiments on the remote isle.

White Zombie
Starring Bela Lugosi, Madge Bellamy, John Harron
(1932) – B&W – 69 Minutes – Not Rated
Harron and Madeline decide to get married at Charles’ lush plantation. However, Charles becomes smitten with Madeline and enters into an unholy alliance with zombie master Legendre to win possession of her – alive or undead.