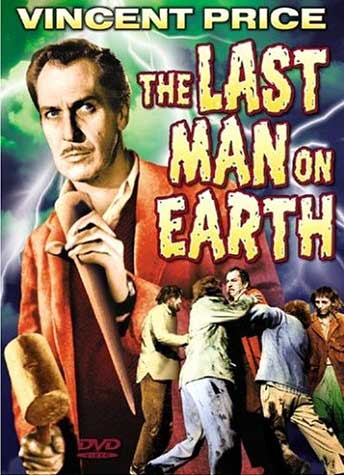 SYNOPSIS:
“Doctor Robert Morgan is the only survivor of a devastating world-wide plague due to a mysterious immunity he acquired to the bacterium while working in Central America years ago. He is all alone now – or so it seems. As night falls, plague victims become part of a hellish undead army that’s thirsting for blood – his!” (courtesy IMDB)

This apocalyptic vision set in the late sixties chronicles the final days on earth of Doctor Robert Morgan, played by the great Vincent Price, as he fights off vampire-like zombies which are taking over everywhere. He equips his home with garlic and mirrors and dispatches all his many intruders with long stakes which he drives right through their vicious black hearts. Now, if you’re leaning back in your armchair watching this film and thinking, “I think I’ve seen this film before” you’re probably right. The Last Man On Earth is based on the novel I Am Legend, and I Am Legend was also adapted as The Omega Man (1971) which starred Charlton Heston. So basically they’re the same film, except in one film you’ve got Vincent Price and the other you’ve got Charlton Heston.

So The Last Man On Earth and The Omega Man were based on the same book. There is a new version of I Am Legend (2007) in the works purportedly starring Will Smith, though it might be Martin Lawrence by the time it gets to the screen. So, if you were the second last man on Earth, who would you rather have as The Last Man On Earth? Vincent Price, Charlton Heston or Will Smith? Will Smith would be able to keep you entertained with the highlights of his early career as a middle-class rapper – whatever became of Jazzy Jeff, anyway? Sure, Charlton Heston would be most people’s pick – he’d be armed to the teeth and able to take out the zombie brigades. I mean, I’d go with Charlton Heston – no, wait, I wouldn’t go with Charlton Heston, I’d go with Vincent Price. Charlton Heston only has guns and…guns on his side, where as Vincent Price can prepare a chicken cacciatore with nothing but three tins of cat food and a dishwasher. He’d have the most fabulous stories about show business – remember Vincent Price was once the greatest Shakespearean actor who ever walked the stage – well, in Theatre Of Blood (1973) he was, anyway. A part of Hollywood was lost forever when he passed away in 1993 and the least we can do is remember him through such films as this classic.

The Last Man On Earth was originally going to be produced by Hammer Films, so in some alternate universe exists another version with a real budget set somewhere in Cardiff with Peter Cushing in the lead and Ingrid Pitt – ah, Ingrid Pitt – sorry, where was I? Oh yes, Hammer unfortunately pissed on the script – sorry – I mean they passed the script on to Robert Lippert, their American associate from American International Pictures – I’ll be showing a lot of films from American International Pictures during this season. He decided to produce the film in Rome, where people were lying around in the streets for free, rather than America where they’d have to pay them to do it.

The Last Man On Earth was an obvious influence on George Romero and the people who gave us Night Of The Living Dead (1968). Another interesting note regarding this production is how pains have been taken to make the story appear to be set in America rather than Italy. The Italians used to think the British and the Americans were the only experts at horror cinema, having no faith in their own domestic product. This changed in the seventies when the films of Dario Argento swept the cinematic planet with his bravura Suspiria (1977).

Directors Ubaldo Ragona and Sidney Salkow helmed The Last Man On Earth. Salkow had been Vincent’s agent but had also directed a great deal of television, including The Addams Family and 77 Sunset Strip, and quite an extensive number of westerns. Salkow had directed Price the previous year in Twice Told Tales (1963). Ragona, on the other hand, had a mere three other films to his credit. No doubt this co-production was financed on the strength of Italians and Americans working together on the same feature, irrespective of who really did the work. The stark black-and-white cinematography by Tonino Delli Colli captures the ethereal desolation of Roman neighbourhoods, streets and avenues. 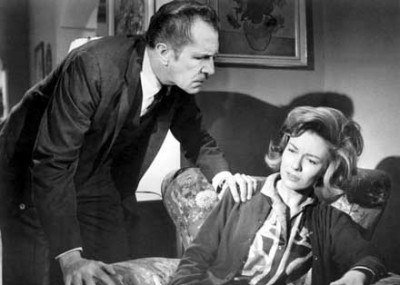 And now I really should talk about Vincent Price who, after all, was one of my biggest fans. We’d worked together in a lot of films, but one that particularly stood out was The House On Haunted Hill (1959). You may remember him from such classic roles as Egghead in the Batman television series, or as The Abominable Doctor Phibes (1971), or you may remember him from one of his last classic films, The Thirteen Ghosts Of Scooby Doo (1985). That was the thing about dear Vincent, as long as it kept him in gourmet meals he didn’t care what he appeared in. Half the budget of Thirteen Ghosts Of Scooby Doo went on his wine list. Of course Vincent Price loved Italy and was required by contract to make a couple of films there. He was also cooking and collecting art on the side, so he was quite happy to be in the country which itself is a cradle of both art and food. 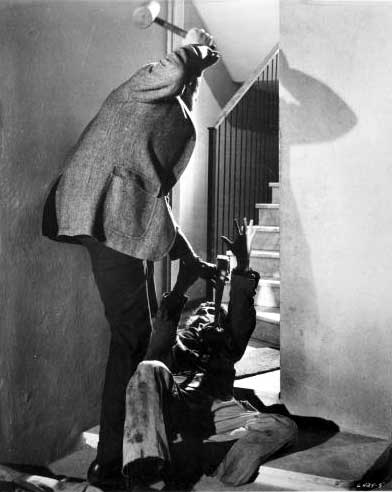 But the real star of this production is unquestionably the screenplay by Richard Matheson, a writer who, in my humble opinion, could do no wrong whatsoever. This opus was based upon his novel I Am Legend which would be adapted a few other times, including Charlton Heston’s The Omega Man (1971) and more recently Will Smith’s I Am Legend (2007). Richard Matheson was responsible for scripting a record number of unforgettable genre hits which include The Incredible Shrinking Man (1957), The House Of Usher (1960), Pit And The Pendulum (1961), Burn Witch Burn (1962), Tales Of Terror (1962), The Raven (1963), Comedy Of Terrors (1963), The Devil Rides Out (1968), The Legend Of Hell House (1973), What Dreams May Come (1998), as well as made-for-television movies like Trilogy Of Terror (1975) and The Night Stalker (1972). Matheson also scripted sixteen immortal episodes from Rod Serling’s original Twilight Zone series. Furthermore, I’d bet at least a quarter of The Simpsons Treehouse Of Horror stories are inspired by Matheson’s work!

His work is carried on by several talented offspring, including award-winning horror author Richard Christian Matheson, and Christian Richard Matheson is a screenwriter of such fantastic films as Bill And Ted’s Excellent Adventure (1989) as well as Bill And Ted’s Bogus Journey (1991) to Hell. For decades Richard Matheson disavowed this version of his novel until recently. Time has been kind to The Last Man On Earth and remains the definitive version of his novel.

The Last Man On Earth is a strange film for the average English-speaking viewer. Of Italian make, it may seem alternately comic, horrific and super-theatrical. The sets are poor, and the editing and plot far from seamless, but the film’s message is superior to standard horror fare. The true horror is an unvarying existence of unconquerable loneliness. Vincent Price is the linchpin of the entire affair. Through his skill and will, the production is graced with believability and pathos. At times, though, even he cannot overcome the schizophrenic tendencies of the work, and his character is rendered overwrought. It is indeed he, more so than the vampires, who infuses unease in the audience. Because of this, one of the most disturbing scenes in the film is where Vincent, overwhelmed, laughs dementedly and unbroken for several truly scary seconds. Anyway, please join me next week when I have the opportunity to burst your blood vessels with another terror-filled excursion to the back side of Hollywood for…Horror News! Toodles!