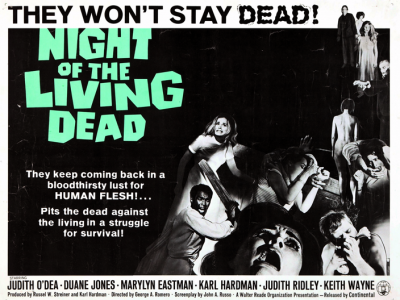 “The dead come back to life and eat the living in this low budget, black and white film. Several people barricade themselves inside a rural house in an attempt to survive the night. Outside are hordes of relentless, shambling zombies who can only be killed by a blow to the head.” (courtesy IMDB)

I am privileged, nay, honoured to discuss one of the most influential horror films of all time. I speak of none other than the classic Night Of The Living Dead (1968) directed by George Romero and starring, well, no-one you’ve ever heard of, so without further ado let’s get straight into it.

Like a lot of great horror films, including Carnival Of Souls (1962), Night Of The Living Dead was the first feature by a director of industrial films, but unlike Carnival Of Souls, it wasn’t the last one. George Romero, fresh from the intense graphic horror of Night Of The Living Dead, went on to make such comedies as There’s Always Vanilla (1971) and Hungry Wives (1972), and they did so well that it’s probably the first time you’ve ever heard of them. So yes, he did go back to horror with The Crazies (1973), the quasi-vampire film Martin (1977), Monkey Shines (1988), the Stephen King adaptation The Dark Half (1993), and Bruiser (2000). But what he’s really known for is the sequels to Night Of The Living Dead: Dawn Of The Dead (1978), Day Of The Dead (1985) and Land Of Hope And Glory…I mean, Land Of The Dead (2005), and the most recent Diary Of The Dead (2007).

So let’s talk about the actors, briefly. Duane Jones plays Ben. He went on to appear in another cult horror film Ganja And Hess (1973), which was also known as Black Evil, Black Vampire, Blackout: The Moment Of Terror, and Vampires Of Harlem. It’s so good to see Hollywood dealing with racism so sensitively. Judith O’Dea, who so effortlessly plays the catatonic Barbara, was also in the television movie of Harold Robbins’ The Pirate (1978) and, well, mainly documentaries about the making of Night Of The Living Dead, really, that’s pretty much her film career.

Marilyn Eastman plays Helen Cooper and she was one of the co-producers as well as supervising special effects, wardrobe and make-up. As in Psycho (1960), the fake blood used was chocolate syrup, that’s why the zombies are forever licking their wounds. The rest of the cast is composed of members of the production company and locals who jumped at the chance to play zombies, as it would take them out of their boring, wretched lives by allowing them to play boring, wretched half-lives.

Night Of The Living Dead was originally written by Romero and John Russo as a horror comedy called Monster Flick which, at the time, was about alien invaders who befriend a group of teenagers and could possibly be mistaken for Teenagers From Outer Space (1959), so they returned to the writing board and added the living dead which Romero called ‘ghouls’ after the television executives he had as clients. Then he read I Am Legend by Richard Matheson, and came up with a more apocalyptic scenario. I Am Legend, of course, was adapted as The Last Man On Earth (1964), which was the first film I discussed, thus the Cycle Of Life and the Public Domain revolves. It was originally shot under the title The Night Of Anubis, then the name was changed to the less-literary but more marketable and accurate Night Of The Flesh Eaters, but they didn’t want to be confused with the promotion of a local steak house, so they changed the title to Night Of The Living Dead and a legend was born. 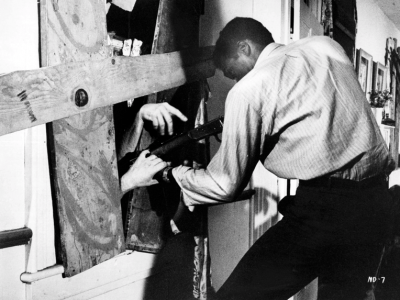 Believe it or not, it was first shown in cinemas as a Saturday matinee, as were many science fiction and horror films of the sixties. As the MPAA rating system wasn’t implemented until November of 1968 (after the premiere) young kids were allowed into the cinema to watch it. After all, it was just a Saturday matinee. I now turn to a description of what transpired during one of these screenings by the noted film critic Roger Ebert, who attended one of the matinees: “The kids in the audience were stunned. There was almost complete silence. The movie had stopped being delightfully scary about half-way through, and had become unexpectedly terrifying. There was a little girl across the aisle from me, maybe nine years old, who was sitting very still in her seat and crying.”

If only the kids of today could follow her example. Since then, Night Of The Living Dead has become one of the most influential films ever made. It’s been remade twice, once officially in 1990 by Tom Savini with Patricia Tallman from Babylon Five playing a much less catatonic and more pro-active Barbara, and once unofficially as Night Of The Living Dead In 3-D (2006) starring…no one, really, making it more faithful to the original. It was released in a colourised version in 1986 with green zombies and again in 2004 with flesh-coloured zombies. 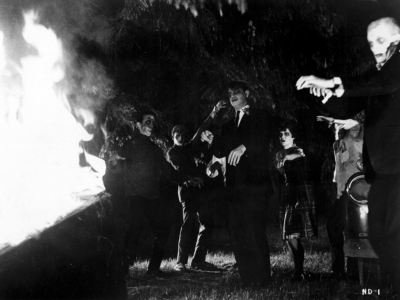 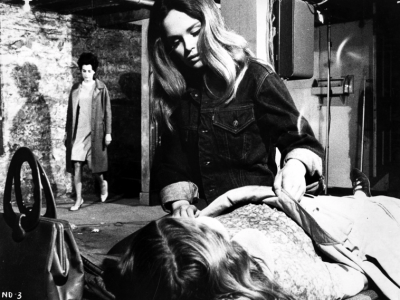 It was otherwise known as Zombie Flesh Eaters, which therefore re-uses the disused title of the original Night Of The Living Dead. Zombi 2 was followed by Zombi 3 which was, of course, called Zombie Flesh Eaters 2 in Britain, and don’t get me started on the American re-titling of the Zombi series, which is up to Zombi 6: Monster Hunter. Shaun Of The Dead (2004), though, is a direct homage to Romero, taking the basic story of Night Of The Living Dead and setting it in a more sanguine England, where the reaction to the zombies is a lot more measured. Romero like it so much he cast director Edgar Wright and star Simon Pegg as zombies in Land Of The Dead. 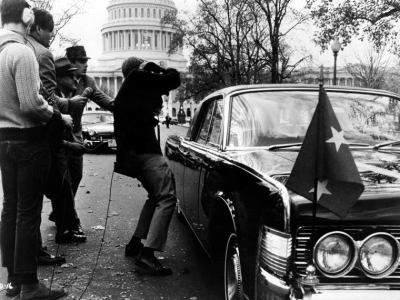 The Living Dead series has also influenced the Spanish Blind Dead films, Sam Raimi‘s Evil Dead films, 28 Days Later (2002), 28 Weeks Later (2007), and Ghost (1990) – well, it explains Patrick Swayze’s performance – and that’s just the ‘zombie’ side of Night Of The Living Dead. The ‘splatter’ side kicked the door open for The Texas Chainsaw Massacre (1974), Halloween (1978), Friday The 13th (1980), A Nightmare On Elm Street (1984), and the director’s cut of Notting Hill (1999). It’s also inspired the video game series Resident Evil and House Of The Dead, as well as the board-game series Zombies, the comic book series The Walking Dead and Marvel Zombies, and the popular short-story anthologies by John Skipp and Craig Spector, Book Of The Dead and Still Dead, as well as the short-lived Kelloggs breakfast cereal All-Brain.

Night Of The Living Dead has been entered into the United States National Film Repository by the Library Of Congress with other films deemed historically, culturally or aesthetically important, which puts it alongside other classic films like Citizen Kane (1941), The Godfather (1972), and There’s Something About Mary (1998). So remember, if you’re watching the cast being munched on, you’re watching art. I’d like to thank my regular readers, and recommend my irregular readers eat more fibre. Until we meet again, toodles! 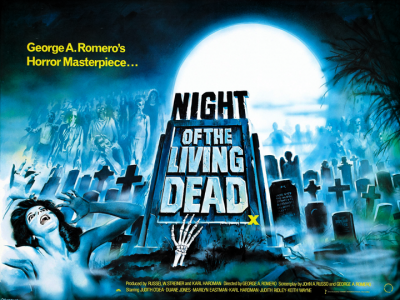