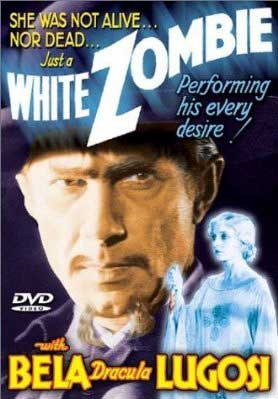 SYNOPSIS:
“Young couple Madeleine and Neil are coaxed by acquaintance Monsieur Beaumont to get married on his Haitian plantation. Beaumont’s motives are purely selfish as he makes every attempt to convince the beautiful young girl to run away with him. For help Beaumont turns to the devious Legendre, a man who runs his mill by mind controlling people he has turned into zombies. After Beaumont uses Legendre’s zombie potion on Madeleine, he is dissatisfied with her emotionless being and wants her to be changed back. Legendre has no intention of doing this and he drugs Beaumont as well to add to his zombie collection. Meanwhile, grieving ‘widower’ Neil is convinced by a local priest that Madeleine may still be alive and he seeks her out.” (courtesy IMDB)

REVIEW:
It is my great pleasure to discuss the eerie horror film White Zombie (1932) starring my favourite Hungarian ham, Bela Lugosi. This film is better than most of the titles to be found in the Public Domain and I’m confident you’ll feel watching White Zombie was time well spent. But I must hasten to point out, these zombies are not the flesh-eating variety. Since Night Of The Living Dead (1968), their official job description now includes an insatiable appetite for brains, and in some recent films have even become champion sprinters! 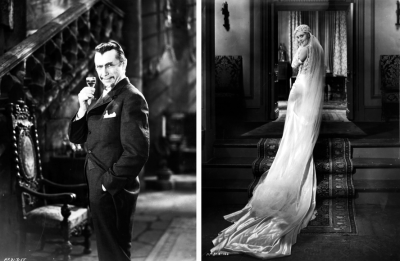 This was not always so. There was a time when all zombies were leisurely-paced manual labourers who never rested, never got peckish, and never formed trade unions. Land-owners, industrialists and other members of the contemporary power-elite regarded such workers as the ideal work-force. But don’t be alarmed, such terrible things could never happen in our own enlightened world. The power-elite of today’s world are compassionate, altruistic people with an inflexible code of ethics that simply don’t allow them to behave in such a brutal, predatory manner towards poor people. They would never behave like flesh-eating zombies, metaphorically speaking, that is.

White Zombie is set in in the Caribbean island of Haiti, a country with beautiful landscapes whose run of so-called ‘bad luck’ continues to this day…it’s almost as if the place was cursed. A similar West Indian island was the setting for the cinema’s best non-flesh-eating zombie film, I Walked With A Zombie (1943), directed by Jacques Tourneur.

1932 was a good year for Bela Lugosi. Still several years before becoming addicted to morphine, Bela was regularly given important roles in good films. This started after the success of Dracula (1931), a role that would have gone to Lon Chaney Senior, had he not inconsiderately passed away suddenly in 1930. After five successful years Bela appeared in fewer and fewer good films, the best probably being The Body Snatcher (1945), and then for the last eleven years of his life he was in b-grade films only. An unhappy end for a man who made his stage debut as Romeo and spent many years playing romantic leads in Hungarian theatre. White Zombie is certainly one of his best film performances, although by the end you might feel tempted to tell him to stop wringing his damn hands!

White Zombie was directed by Victor Halperin, and I suspect it to be his career high-point. He directed other films in the same genre, including Supernatural (1933) and Revolt Of The Zombies (1936). Supernatural is well-worth a look, and Revolt Of The Zombies is…is a terrible waste of a good title. In White Zombie he was at his most inspired. Superimposing Madeline’s image over a damp bar-room table was a nice idea. Fifteen years later, English director Carol Reed did something very similar in Odd Man Out (1947) starring James Mason. But no, Victor Halperin did not invent the jump-cut twenty-seven years before Jean-Luc Goddard. All those transitions in White Zombie are the result of lost frames. In olden days, films often broke during screening and the projectionist would cut-out damaged frames and then glue the film back together. White Zombie deserves a restoration but it’s not likely to get one. Mainstream, high-profile films like Gone With The Wind (1939) are restored to pristine condition of course, but quality genre films like White Zombie stay neglected. It’s an outrageous injustice! I feel strongly about this issue, you can tell. The restoration of old films is one of my favourite good causes, second only to the ‘Donate My Life Savings To Pay For Nigel’s Next Holiday In Europe’ fund. Have you heard the slogan? “You know it makes sense, if you don’t think about it too much.” It has a ring of truth to it. At least, it does to my ears.

But I digress. There are some interesting names in the supporting cast of White Zombie. Playing Madeline is Madge Bellamy, a former dancer and beauty queen who became a popular leading lady during the twenties, memorably playing the title role in Lorna Doone (1922). White Zombie was one of her last important roles, and Madge was soon reduced to supporting roles in films like Charlie Chan In London (1934). Readers who have seen Robert Altman’s film Gosford Park (2001) may recall the pre-production of Charlie Chan In London being one of its many subplots. 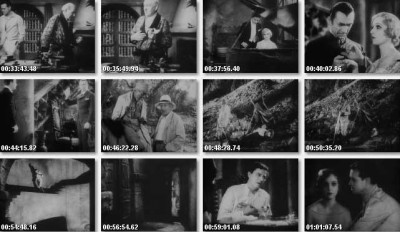 Playing Beaumont’s sinister butler, Silver, is Brandon Hurst, a British character actor who had a long career in Hollywood. Murder In The Rue Morgue (1932) and House Of Frankenstein (1944) are just two of the horror films that provided him with employment. He was the primary villain in the silent version of The Hunchback Of Notre Dame (1923), in which Lon Chaney Senior gets to throw him off the cathedral roof. At least in White Zombie he doesn’t have so far to fall. At a later date I hope to review the 1923 version of The Hunchback Of Notre Dame for you, you lucky people! White Zombie has good performances, excellent photography, thoughtful music, some nice glass paintings, a dream-like atmosphere, huge rooms which resemble the cavernous interiors in Doctor Frankenstein’s ancestral home, and an attractive zombie named Madeline, who retains her ability to play the piano after brain-death. That’s more than Ozzy Osborne could manage!

The real fault with White Zombie is that it’s too short, and frankly, how many of the films I’ve discussed can that be said of? I think the early shots of the zombies lumbering forward should have lasted longer, and the very best scenes in White Zombie are all too brief. The scenes set in the Sugar Mill are marvelous. Expressionistically lit, they remind me of the workers in Metropolis (1927). They should have lingered on these images, they could have run as long as Titanic (1997) and I’d still be spellbound – and mercifully free of Celine Dion’s caterwauling! It’s vitally important that you join me for next week’s edition of Horror News, because an old gypsy woman told me that if you don’t read all my reviews from now on, the entire world will be destroyed. Normally I’m highly skeptical of such claims, but she was just so certain, I feel we’d best not take the risk. So enjoy your week, and remember, the survival of the entire world depends on you. Toodles!