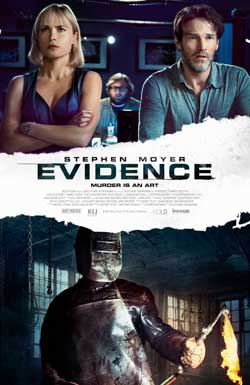 A detective hunts down a killer using video footage shot by the victims of a massacre at an abandoned gas station.

I actually thought that the premise for Evidence, although entirely farcical given that if you were running for your life you would not make the decision to film your terrified struggles, was an interesting one which had potential to make a great film. For this reason, I did want to like the film. But I really did struggle. 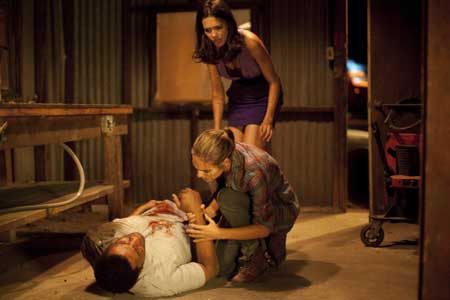 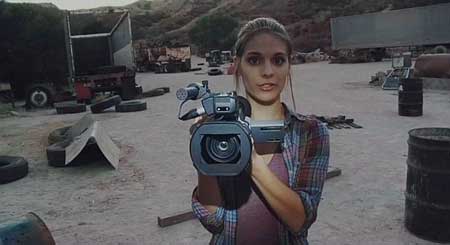 The film begins by showing us the aftermath of what looks like some truly grisly event – forensic experts crowd round a blazing dumpsite, examining singed body parts which have been scattered about haphazardly. The audience is then taken on a journey along with the police detectives to figure out what exactly happened here. And what do they use to try and accomplish this goal? Fingerprints? DNA samples? Nope, video footage captured on a few of the victims cameras and phones.

Ok, so already we’re on shaky ground but I’ll accept it. A room full of detectives work their way through the ‘evidence’, making a few early guesses about who the masked killer wielding a blow torch could possibly be. Of course, we are kept guessing until the very end when the final revelation occurs from one plucky cop who spends those extra couple of minutes intensely examining the film. The problem here is that interest has waned too much by this point for the big twist to really be fully appreciated. Unfortunately, the whole ‘twist ending’ thing has now seemed to become the norm, so it fails to shock in the same way that The Sixth Sense managed back in the nineties. To even make such a comparison would be laughable. 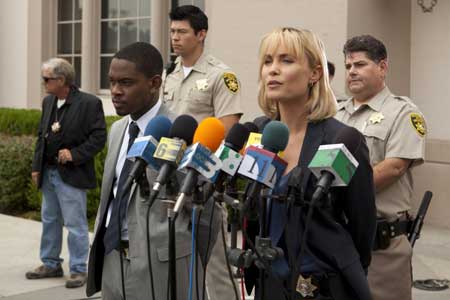 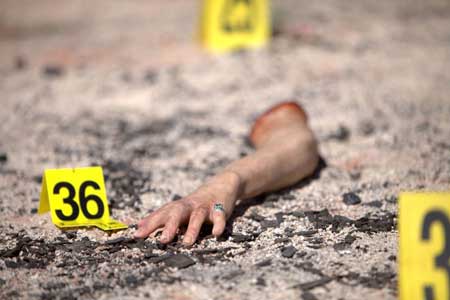 The director, Olatunde Osunsanmi, previously took advantage of the whole found footage phenomenon (sort of) with his previous film, The Fourth Kind. Whilst I enjoyed the pseudo-documentary stance that he achieved with that one, Evidence failed to impress simply because it just wasn’t that exciting to watch. Plain and simple. The footage itself that the police detectives were analyzing was tired and visually very unsatisfying to watch, then the police detectives themselves (with Radha Mitchell among them – who has featured in such horror greats as Pitch Black, Silent Hill and The Crazies (remake)) were the most stereotypical, cheesy creations I’ve ever had to witness. Essentially, those portions of the film are just about the audience watching people who are watching the screen. Though this may be the directors attempt to send a metaphysical message across, I wasn’t all that amused, truth being told. 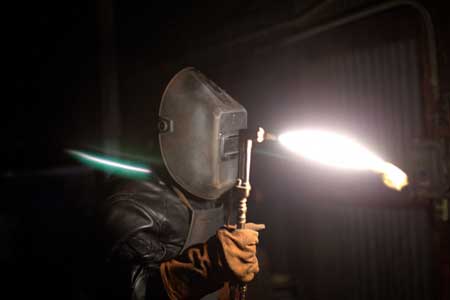 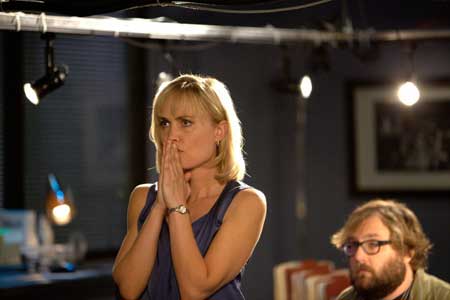 Similarly, the footage captured is not the best quality and so don’t expect much on the gore front. It seems that the audience isn’t really treated to a single kill which many will find disappointing. Every time things started to get a little juicy, the stupid shaky camerawork would completely miss anything exciting. Things were too dark and there was way too much running around to really have time to digest what we’re seeing. The characters were all basically going in separate directions so no connections were formed to anyone. There was a tiny bit of character development at the start regarding the main two female friends – one filming the others assent to stardom, but the others are obviously just there as serial killer fodder. It is exactly for this reason that the reveal of the murderer has barely an impact at all.

Evidence doesn’t actually offer anything new to the sub-genre of ‘found footage’ films and seems to rely on the same tropes we see every time. It tried to be clever and innovative, but by the time it got to the grand ‘twist’, the audience had already switched off. There are even a few plot points which were never fully developed and it is a mystery why they were even thrown in there. For example, a couple of the characters were given half-baked back stories which never reached a conclusion or indeed, had any purpose whatsoever but to add unnecessary detail. My advice here is that, if you do decide to watch it, keep your expectations low!

Evidence is now available on bluray per Image Entertainment