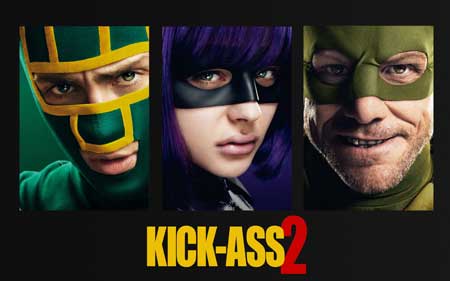 The costumed high-school hero Kick-Ass joins with a group of normal citizens who have been inspired to fight crime in costume. Meanwhile, the Red Mist plots an act of revenge that will affect everyone Kick-Ass knows.

The first “Kick-Ass (2010)” film caught me by surprise way back in 2010. I thought it was an extremely stylized, hyper violent & enjoyable adaptation of Mark Millar’s original comic. Although it wasn’t a massive hit domestically, it had a robust afterlife on home video and the powers that be decided to milk the concept of teen age superheroes and their personal lives one more time. The big surprise this time round is that this film makes a good case for making Kick Ass 3! 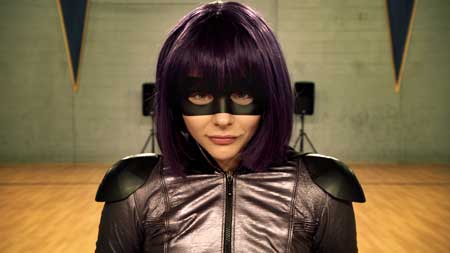 In Kick Ass 2, we find Dave Lizewski AKA Kick Ass (Aaron Taylor-Johnson) continuing to parole the streets of NYC looking to make the streets just a little bit safer. This time around he’s being trained by Mindy Macready AKA Hit Girl (Chloe Grace Moretz) who (If you remember from the first film) partnered with her father Big Daddy in an effort to thwart crime boss Frank D’Amico. In the sequel it’s D’Amico’s son Chris AKA The Motherf*cker (Christopher Mintz Plasse) who’s making trouble as he looks to avenge his father’s death at the hands of Kick Ass. Dave has decided to recruit other masked vigilantes to help him out and form a group of “Superheroes” to patrol the city streets. He soon meets up with Dr. Gravity (Frankie Faison) who leads him to Colonel Stars and Stripes (Jim Carrey) and he’s promptly recruited into his band of costumed crime fighters. But The Motherf*cker is also forming a group of villains to capture, torture and kill Dave before terrorizing the city.

In the midst of all of this, young Mindy’s legal guardian has reminded her that her father’s dying wish was for her to listen to what he tells her to do and he demands that she stop fighting crime and go back to high school like any girl her age would be doing. She acquiesces to his demand (Although she does put up a fight over it) and begins to find that she might actually like living life as a normal teenage girl. But it should come to no one’s surprise that she isn’t going to remain that way for the rest of the film. 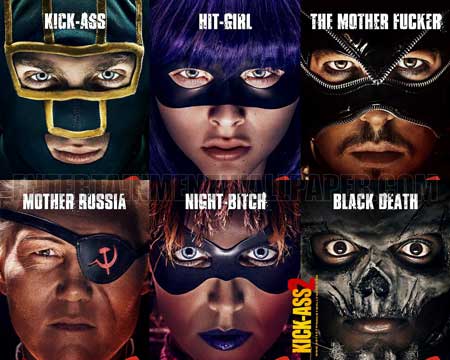 I had no idea where the plot of this film was gonna go but I was almost immediately comfortable with the characters once again and found myself enjoying Kick Ass 2 right from the get go. Although it lacks some of the visual panache of director Matthew Vaughn’s original film, it still has a strong visual style and a good, if not great script from director/screenwriter Jeff Wadlow. If anything, Wadlow’s film is far more frenetic than Vaughn’s and while there are some visual hiccups that are obviously due to a smaller budget than the first one had, it’s still a bright, vibrant and energetic film with some surprisingly effective characters in it.

Johnson and Moretz do a great job in continuing with the journeys that both of their characters are taking. Johnson looks a bit older than his character is supposed to be but it’s no deal breaker and Moretz is only 16 so she fits into Hit Girl’s skin like a glove. The subplot involving her and her attempt to assimilate into a normal teen aged girl’s life takes up a decent portion of the middle of the film and while it might sound like a ABC Afternoon Special to some, it’s never anything less than entertaining and ultimately hilarious! And in spite of his recent rumblings in the news about his distaste with the finished film and it’s violence, Carrey seems to be having a grand old time playing Colonel Stars and Stripes here. He uses a very distinctive accent that is explained later in the film and I could swear I saw a glint of joy in his eyes as he was (Seemingly) having the time of his life running around fighting crime. 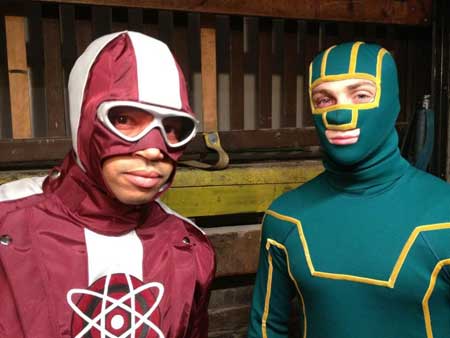 Plasse plays The Motherf*cker way over the top but the character is written that way and he’s obviously having a great time chewing up scenery and John Legiuzamo makes a surprise appearance as his advisor/driver that leads to one of the more unexpected and tear jerking scenes in the film. But the big surprise for me were some of the villains hired to help The Motherf*cker wreak havoc. The Tumor, Black Death, Genghis Carnage and especially Mother Russia were all hilariously ruthless but she was something more than the others. Standing at 6′ 2″ and looking like she weighs a good 200 lbs of solid muscle, Olga Kurkulina takes the role and turns the character into a force of nature. Hers is the only character in the film that actually looks and feels like she’s an actual super villain! In one standout scene she faces a squadron of police cars on her own with her bare hands in broad daylight by basically tearing them apart and coldly murdering the police inside of them. She kinda looks like Mickey Roarke’s character in “Sin City” if he was a woman and she’s badder than anybody else in this film by far. The final battle between her and Hit Girl rang a bit false to me only because it was obvious that she could’ve torn the teen to shreds any time she wanted to. I can pretty much guarantee that Mother Russia will be the topic around water coolers all across America next Monday, she’s that impressive! 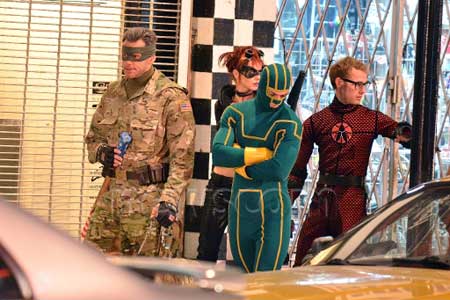 Kick Ass 2 more than lives up to the legacy of the first film and even betters it in a few ways! The script isn’t as fresh here as it was last time around but Wadlow takes the characters to where they should go logically and effectively. Visually the film suffers in comparison to the first one but not to the point where it’s painful to watch. It’s a hyper kinetic, stylized, ultra violent & funny film that takes a few detours from all of the fighting to give us a glimpse of some of the inner tortures that the characters are dealing with and that was something I didn’t expect at all. Good stuff! Great movie!